Our Saturday round up includes a track from the superb French band Furies, whose debut album was released yesterday.

Also, Hollywood Undead have released a special version of ‘Heart of a Champion’, featuring guests Jacoby Shaddix of Papa Roach and Spencer Charnas of Ice Nine Kills, which you can see below.

Tomorrow, we find out about a little known band (outside of parts of America) called Guns N’ Roses, who released their debut album ‘Appetite for Destruction’ 21 July 1987 and backed this up with a European Tour only two months later.

“They had had some airplay with ‘Sweet Child Of Mine’ and ‘Welcome To The Jungle’ on Mick Wall’s Monsters of Rock show but, despite this exposure, they were not known over here and there was hardly any interest from the local music press to even write a story or review about them.

“So the record company was more than happy to have some people around who were really interested.

“I still remember sitting in the band’s dressing room conducting an interview with Duff McKagan, while their tour manager continuously plied us with countless drinks.”

Tomorrow, we reveal the full story behind this and many more Heavy Metal stories from the golden era of the 80’s and the fanzine which evolved from this.

The package was recorded in Stuttgart, Cologne and Hamburg and was mixed by long time Volbeat collaborator Jacob Hansen.

From France, the Furies released their debut album ‘Fortune’s Gate yesterday and you can find out more about the superb band and their songs in a recent interview with MetalTalk.

Here is the title track from their album in Lyric video form:

Twan van Geel told MetalTalk: “On Friday November 13th, our new album NOA’S D’ARK shall see the pale light of day. And it is with a thrill of pleasure we hereby offer you a second track from that album, called: ‘Anarchrist’. A Diabolical Libertine of a song.

“Lyrically fuelled by what I refer to as ‘spiritual anarchy’ and musically drenched with a Heavy load of melancholic darkness, ‘Anarchrist’ outgrows itself on both spectrums. It is an audial entity of existentialistic height that takes you on a journey through the mortality of the soul straight into the bliss and horrors of our cosmic aura.

“Written with an instilled necessity for the liberation of dark art through extreme music.

Do these pandemic times try to imprison your mind and flesh? The ‘Anarchrist’ will show you right the f*ck out!”

Flare Voyant have released the song ‘Paul’s Funky Cab’, a track from the upcoming EP ‘Elusive Times’ which will be released 7 November 2020. The EP s a four track collection of Rock and Roll extravaganza, which aligns their Jazz Fusion and Prog aspirations closer to their Hard Rock and Funk swagger.

The track is a tribute to London and a friend of theirs who once drove Jimmy Page home from Victoria station and has also picked up the likes of Rick Wakeman, Roger Daltrey and Pete Townshend.

Johnny 3 Tears tells us: “‘Heart Of A Champion’ is about digging in deep when things appear at their worst. Finding the strength to overcome any and all odds against you.”

Jacoby Shaddix said: “As soon as Johnny and Charlie and the boys floated the idea, we were in. The video shoot was like a reunion too. The lLast time we all saw each other we were blowing the doors off a show in Germany seven months ago.”

Spencer Charnas added: “I’ve always been a fan of Hollywood Undead and when we toured together this past winter we hit it off immediately. It’s an honour to be part of such a strong song and having Jacoby on it as well is just the icing on the god damn cake.”

All Runs Red is a new international collaborative Rock project which features London based musicians Quentin Roelandt (The Q) as Guitarist/producer/mixer and Drummer/producer Edoardo Mariotti. Their unique take is that every song released features a different guest vocalist, ensuring the songs have a global feel.

The first single from the project is ‘What Good Would That Do’, which features New Zealand singer Mike Murphy (Written By Wolves). 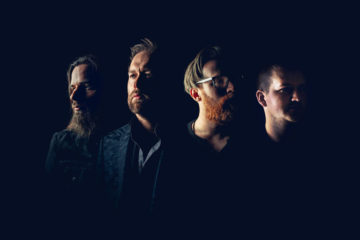