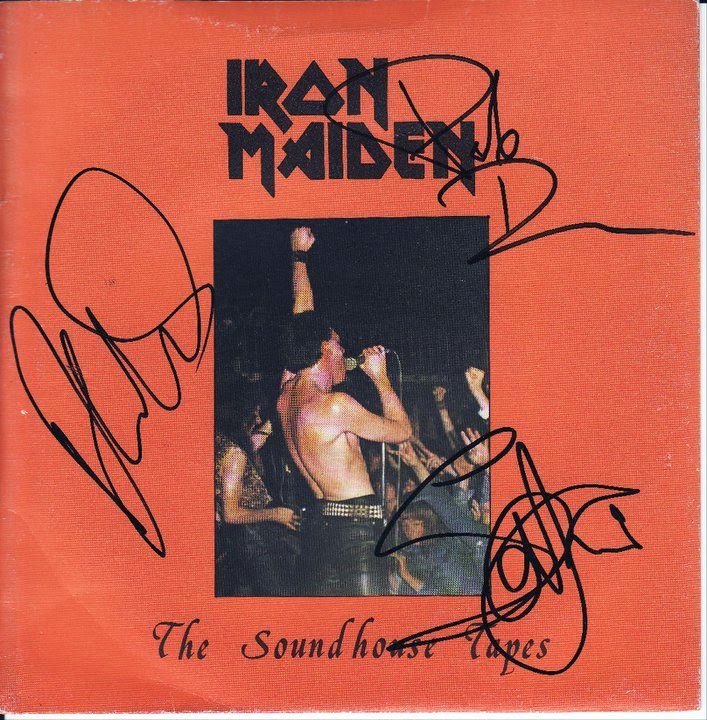 With the demo in the bag we went back to rehearsing at Hollywood Studio’s, whilst waiting for the final studio cut to be sent to Steve. In the meantime the Green Goddess had been overhauled and was now road worthy again, so we managed to book a bunch of gigs and went back to what we did best, i.e. play to packed pubs all over the place.

It wasn’t that long after we got back to gigging that the first batch of our demo’s came through and, keen to make an impression, Steve sent the demo’s off to everyone he thought important enough to hear it.

About this time we heard of a heavy metal bar/club/pub making a lot of noise in Kingsbury, North West London, and Steve wanted to go there and try his luck.

The Heavy Metal Soundhouse, as I recall, was a huge pub on a roundabout in the middle of Kingsbury, NW9 (I think). So loaded with our massive assignment of one (1) cassette, Steve and I made the journey round the North Circular Road in his Nan’s Nissan and, having found the place where somebody had conveniently left it, we ventured in.

First impression was the volume. Not the size of the place, I mean the VOLUME. The noise was deafening. Well to a layman it was deafening, but to those of us that were used to it, this was sitting at around 9. Iron Maiden was only playing at 8 at the time, but we persevered.

Harry and me stood and watched the head bangers doing their thing for a while, when Steve then decided it was time to approach the long haired guy at the consul and have a quick word.

Neal Kay looked like he’d seen it all before and until this point, I’m sure he had. With his long blonde hair and stack heeled boots, he watched me and Harry approach, with a look that said, here we go again. With Steve holding up the demo before him, Neal met us at the steps to his rostrum.

“Yes gents?” he said. Steve passed him the demo tape, and simply said, “Can you give this a listen?”

Neal accepted the tape and went on about the amount of demo’s he got all the time and he didn’t have time to play them all but eventually agreed to give it a listen. Steve and me got back in the trusty Nissan and went home.

A few days later my phone rang and some lunatic was ranting and raving about how good our demo was.

It was Neal Kay.

He was saying how he wanted us to play at the Soundhouse as soon as he could set it up. I then phoned Steve and relayed the conversation I’d had with Neal. Steve hung up and phoned Neal to arrange our first gig at the Heavy Metal Soundhouse. The gig was quickly arranged for a few weeks later.

In the meantime, ‘Sounds’, a popular music weekly, had picked up on the heavy metal scene at the time and had started to compile a heavy metal top ten, based on the stuff that Neal was playing at the pub.

Maiden’s demo had become so popular at the Bandwagon/Soundhouse that one of our tracks, ‘Prowler’, was all of a sudden number one in the chart and the punters were going mad for the band.

This was ultimately the best move the band had ever made. Ok, it was Steve who made the decisions, and nobody can fault his single tracked mind, but to me, this was the one thing that helped to make them as big as they became.

The union of Steve Harris and Neal Kay was exactly what Iron Maiden needed.

But again, that’s history now, and I’m telling the story my way.

Every gig we did at the Soundhouse/Bandwagon was sold out. I’m not sure how many shows we actually did there but we always came away feeling we had proved ourselves. Of course, we were still doing gigs all over the country and our fan base was
getting bigger and better everywhere we went.

We then got booked to do a headline gig at the Marquee Club in Wardour Street in the centre of London which to Paul and me was almost like coming home.

The two of us had spent a couple of years frequenting the Marquee seeing great bands like Nutz, (a favourite of mine, so much so that I followed them everywhere); AC/DC, who I remember doing every Monday in August ’75??? Whatever year it was, the encore usually ended up with Angus getting his kit off; Thin Lizzy and Gary Moore. We even got to see Status Quo do a warm up prior to their gig at the Reading Festival the following night. It got to the point where Paul and I went to the Marquee so often, one of the managers, a guy called Nigel, used to let us in for nothing.

I also remember seeing a band featuring a couple of old school friends, namely Jeff Hepting from William McGuffie in Walthamstow, and Phil Collen from Leyton County High School for Boys (also the home of Steve Harris and Paul Dianno). The pair were getting together to play lead guitars for a band called Dumb Blondes.

To be honest I don’t remember what they sounded like. I was just fascinated that I was watching some old schoolmates live on stage and thinking, if they can make it, why can’t we?

Iron Maiden’s first gig at the Marquee was a huge success, but it was also a long day. We arrived with our equipment at around 10AM. The guy running the place didn’t show up until noon and with parking restrictions along Wardour Street being what they were at the time, we couldn’t just park the van and unload our gear. So Pete and Vic took it in turns to take the Goddess around the block a few hundred times.

Finally it was time to load our gear in. At bloody last. Then the guy we had been waiting for says, “you could have parked round the back.” GGRRRRR!!! Even more annoying, once our vehicle was empty, the same guy said, “you can’t leave your van there.”

The area at the back of the Marquee was meant for residential parking only and to get in and out of the parking area with a van our size meant only one thing. Having driven in forwards, somebody had to reverse it out, AND find somewhere to park. To me this was easy, I don’t drive, S.E.P. (Somebody Elses Problem.)

When Vic finally returned to the Marquee Club, having parked 2 miles away and spitting feathers, Pete and I had the bands gear set up and we were ready to go. This presented our next problem. The Marquee wasn’t big enough for us to store our empty cases, so Vic had to walk back to the van, and bring it back to the Marquee so we could get rid of said empty cases, and then take the van to another parking spot even further than the first.

Stay with it folks, and eventually you will see a pattern emerge.

By the time Vic finally got back, he’d missed the soundcheck and all you could here was “fucking” this and “fucking” that. To me and Dave Lights it was hilarious, and Pete Bryant too, but eventually Pete took pity on Vic and took him to MacDonalds. You could still hear the moaning half a mile away. By the time they came back to the Marquee, Vic had calmed down a little and I was given a cold Big Mac, fries and a root beer, “and be fuckin’ grateful”. I just fell over laughing.

You might not get the irony but what we had was special.

The gig itself was fast and furious, as most Maiden gigs were those days. The place was filled with a lot of old friends from the Ruskin, but now we had the new bunch from Neal’s Bandwagon selling the place out was easy.

So, once the gig was over, me, Pete and Dave Lights got on with doing what we did best, tearing the bands gear down. Vic said, “I’ll go and get the van then?” To which me and Lights said, “Yeah, bye.” But Pete asked me to look after the guitars and walked off with Vic.

The band had finished getting changed (there were no showers backstage at the Marquee in those days, in fact ever) and went home, leaving me and Dave Lights looking after the bands equipment. There was plenty of time to think about what was going on and that’s when it hit me most. Having spent all this time working and touring together, this was the first time that band and crew had been split, and I had no idea what arrangements had been made regarding how I was getting home (not selfish, but survival…lol), or where the gear was going to be stored?

Of course, everything had been worked out by Vic and Steve, they just hadn’t told anybody else. Pete knew when Vic told him in Maccy D’s, but me and Lights were oblivious until we packed the van up and headed back to the East End.

With Steve and Rod constantly pushing everyone to get things moving at breakneck speed, gigs were getting organised before the crew were ready. Then...

Home! Home again, I like to be here when I can.I felt like shit. My girlfriend had left me and I had nothing to...