It was a horrible night out in old London town this Saturday night. The rain was sideways in my face all the way to the Unicorn in Camden. I braved the rain to see the metal storm that is Fist. 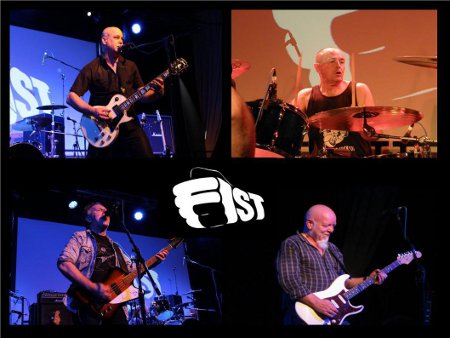 Hot night in a cold town

About 35 or 36 years ago a band from oop North burst onto the metal scene with their searing debut single ‘Name, Rank And
Serial Number’. They even breached Hadrian’s wall and I got to hear them. I was hooked and bought ‘Name, Rank And Serial Number’ followed by ‘Forever Amber’, then their first album ‘Turn The Hell On’.

Big things were expected of the band as they had signed to MCA. Then nothing. Their next album saw them back on Neat records but it was very hard to get. They seemed to be one of those bands that I was destined never to see.

So imagine my surprise to see them touring London via the Camden Unicorn. The four members of the band took to the stage and I can happily say they played to a packed audience.

The band are Harry “Hiroshima” Hill, Dave Irwin, Norman Appleby and Glenn S Howes. This guy is a power house. Also a
superb frontman who knew how to play the audience. By the end of the night he had them in the palm of his hand.

What struck me about the band was how tight they were. You could have believed that these guys had been playing together for the last 35 years. Plaudits to the bass player for the rock and roll bandana, you do not see enough of them these days. Metal has always been my drug and it is good to see that power flowing through these musicians so much so it transferred to the audience. 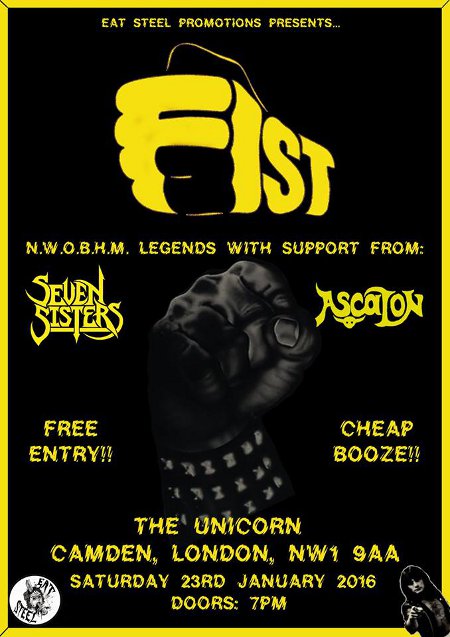 Also they played their sloppy track but this is not the soppy syrup of AOR but a slow lilt before the bludgeoning might of the rest of their back catalogue. Then Glenn had the audience chanting some northern words. Anyone’s guess what we were shouting but it was a lot of fun and it showed the ease of the banter of the lead singer.

Last track of the night was to be ‘Name, Rank And Serial Number’, a blistering track that should have been a shining star of the NWOBHM. It is still a fan favourite but it should have been up there with ‘Wrathchild’, ‘Wheels Of Steel’ and ‘Breaking The Law’, the anthems of NWOBHM.

A nice touch was the band coming on for two encores. the last being a fitting tribute to Lemmy in the shape of ‘Ace Of Spades’.

Most bands of senior years are quite happy to sail into the night of obscurity but not Fist. They are back and they are beteer than ever. Yeah they were worth the 36 year wait.