On a glorious night in Rocky Balboa’s home town, AC/DC brought their Rock Or Bust World Tour, and Cliff’s outstanding career, to a close and played ‘Problem Child’ for the first time since 2011 and for the very first time since Axl took over as frontman.

Cliff has made a video in which he expresses his heartfelt thanks to fans and also elaborates on his reasons for retiring.

“It’s time for me to step out, that’s all,” says Cliff in the video, while acknowledging the band’s recent line-up changes, specifically the departures of long-time members Malcolm Young, Phil Rudd, and Brian Johnson.

“I’m happy,” he continued. “I just need family time, just chill out and not do this.

“I couldn’t have asked for anything more – being with the people I’m with and have been, being in this situation with this band, playing this music.”

The band also posted an ‘end of tour’ video preceded by the message: “Thank you to everyone who came to see AC/DC on the #RockorBust World Tour.”

Cliff originally revealed his decision to retire to Gulfshore Life magazine of Naples, Florida on 7th July (here) and said the whole near four decade journey had been “surreal”.

One name that could be in the frame to replace Cliff is Tom Hamilton of Aerosmith. Tom played with Thin Lizzy at Ramblin’ Man Fare in England earlier this summer and Aerosmith are calling it a day after their next tour.

Guns N’ Roses’ Duff McKagan could also be a contender, as could former Bruce Dickinson bass player and MetalTalk’s own Chris Dale who features on Tank’s recently digitally re-released ‘War Machine’ and ‘War Nation’ package which reached number one in European album charts.

A poll on the AC/DCFans.net Forum asked whether the band should now call it a day and 806 people have voted so far, 58% of them saying “yes”. AC/DC’s Facebook page has over thirty milliom likes and clearly the rest of the fans thought this question was an utter load of bollocks.

Anyone who saw the band on the Rock Or Bust World Tour in Europe or America would wholeheartedly agree that there is plenty of life in the old dog (eat dog) yet and certainly we at MetalTalk want to see them carry on for many years yet, whatever line-up changes they have to go through to keep the show on the road.

We’re expecting a new Axl fronted album next year, another World Tour in 2018 and possibly even a surprise one-off headlining apearance at a major English Festival in summer 2017. We said “possibly”…

Best wishes to Cliff for a long and happy retirement. You most definitely earned it. 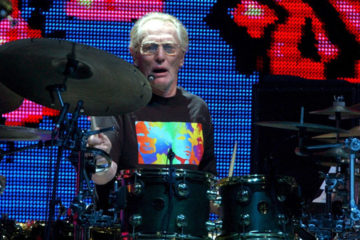