Týr, explosive Viking Metallers from the Faroe Islands, are currently in danger of having their whole European tour cancelled due to objections over vocalist Heri Joensen’s participation in the Grindwaljagd, the annual slaughter of dolphins and whales.

Týr released their seventh and latest album, ‘Valkyrja’, in September 2013 and are due to set off on a twelve country tour of Europe with Sirenia starting September and finishing in London on 27th November.

The scheduled date at Logo Hamburg has already been cancelled and the venue owners made the following statement: “It came to our attention only after the official confirmation of the show that the head of the band plays an active part in Grindwaljagd in the Faroe Islands, a practice that we abhor deeply. Such people will naturally not play on our stage.”

There are heavy rumours going around that other dates in Germany have also been cancelled, particularly Cologne, Rostock and Weinheim but this is not officially confirmed and the dates still appear on the band’s tour listings on their official pages. There are also rumours that the entire tour has been cancelled but at the moment the London date definitely stands.

Heri Joensen has published a video explaining his side of the situation which should be watched and understood before any judgement is passed. Here it is…

As expected, animal rights sympathisers, supporters and activists are in overdrive over this one with some pretty nasty comments being directed towards Heri and the band.

This is currently an ongoing situation that we are monitoring but in the meantime, you can show your support for Týr at O2 Academy, Islington, London on Sunday 27th November, doors 5.00pm. The bill is Sirenia, Týr, Unleash The Archers, Xaon and Relicseed and tickets are available right here. 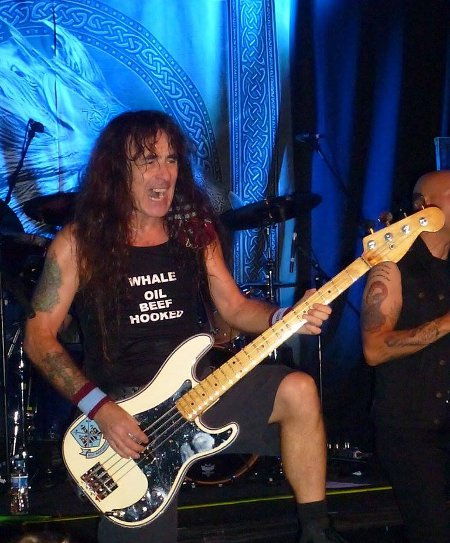 Steve Harris of Iron Maiden who is absolutely nothing to do with this situation, although Týr did cover ‘Where Eagles Dare’ on ‘Valkyrja’.