Six years ago the Scorpions announced their farewell to the world, however the end is still nowhere in sight with the Hannover based band, who were formed by guitarist Rudolf Schenker way back in 1965, now celebrating their 50th anniversary, although the first studio album, ‘Lonesome Crow’, was released back in 1972 just after Heavy Metal had laid down their earliest foundations. 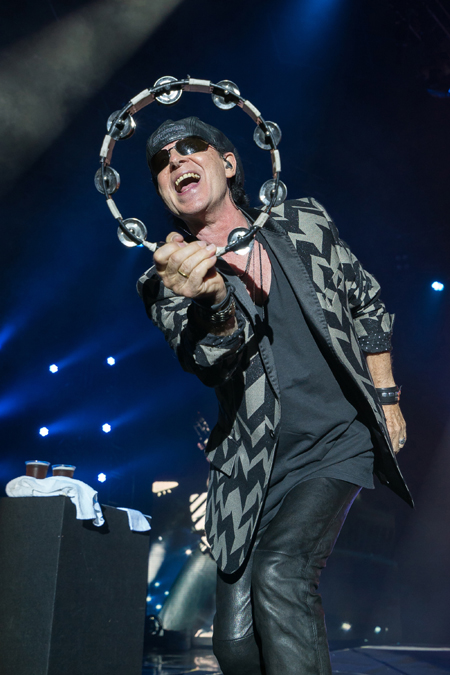 Since then the Scorpions have became a global household brand, conquering every continent on the planet with their deadly sting of multi million selling albums full of power ballads and the very best in textbook Heavy Metal. 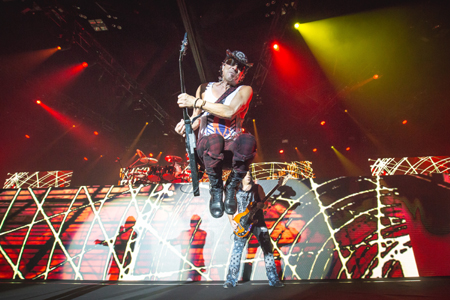 It’s amazing just to see how popular the Scorpions are in this multi ethnic country with a population of just five-and-a-half million. A sell out crowd of seven thousand fans filled into this sixth floor arena which is situated on the top floor of a grand multi shopping complex.

With an encyclopaedia of tunes to chose from you could be forgiven for thinking that the Scorpions would stick to a greatest hits set at this stage in their long established career, but this show was by no means a nostalgia trip as the Germans remain relevant by performing four songs from their most recent album, ‘Return To Forever’, which was released last year. 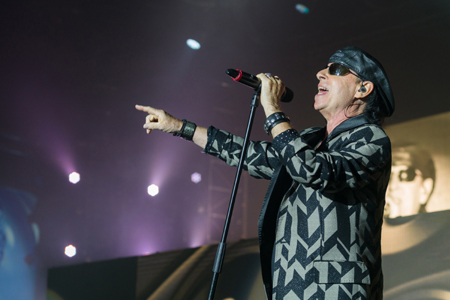 That message was clear in the opening statement of ‘Going Out With A Bang’ from ‘Return…’ followed by the more popular ‘Make It Real’ with the Singaporean flag emblazoned on the visual screen backdrop, and the crunchy riff of ‘The Zoo’ which saw all arms raised in a unified clap-along.

It’s understandable that the Scorpions are thinking about their retirement but both aged an astonishing sxity-eight years, an athletic Rudolf Schenker has more energy than most men half his age and Klaus Meine’s unique voice is still in fine fettle hitting all the high notes. 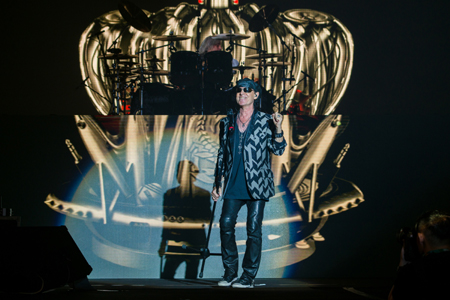 ‘Coast To Coast’ is one of the most captivating instrumentals you’ll ever would hear in a live setting with Schenker and Matthias Jabs out front giving their all with bassist Pawel Maciwoda and Klaus Meine adding guitar and standing to their side like the proud Four Horsemen. A spectacular sight.

With so much to cram in, their early 70s output is reduced to a medley. A further medley of acoustics sees the Singapore crowd faithfully sing along to ‘Always Somewhere’ and ‘Send Me An Angel’ and their voices are further raised for the symbolic anthem of ‘Winds Of Change’, a single that sold an amazing fourteen million copies worldwide. 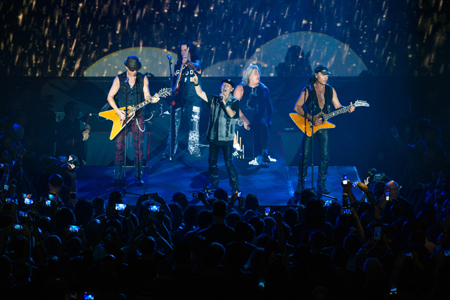 For those who think the Scorpions are just a ballads band, you couldn’t be further from the truth as the remainder of the show gets ultra heavy with the belting ‘Rock N Roll Band’ and the the explosive ‘Dynamite’ that got my head banging like a good ‘un.

After twenty-three years service with Motörhead, new drummer Mikkey Dee has settled in with the Scorpions as if he has been there for years, giving the Scorps a new injection of brutality. 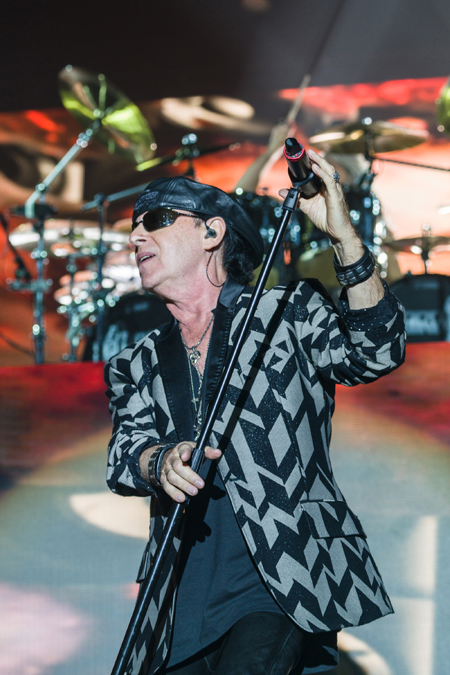 His time with Motörhead wasn’t forgotten with a tribute to Lemmy in the form of a colossal ‘Overkill’ which saw a projection of Marshall amps and portraits of the iconic hero which brought tears to the eyes of many. A most fitting tribute.

The Scorpions are the masters of how to use a stage, making maximum use of their area with every band member shaping themselves in choreographed moves like true professionals. 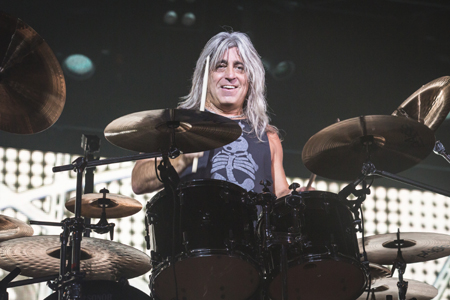 The rocket ride of ‘Blackout’ sees more madcap facial expressions from Schenker, ‘No One Like You’ hits the roof with Matthias Jabs looking the Guitar God, along with Schenker, and ‘Big City Nights’ is the perfect anthem for this colourful bustling city.

The power ballad ‘Still Loving You’ is the first encore with the evening and a knockout ending was delivered with the simplicity of the mighty ‘Rock You Like A Hurricane’ which blew the roof off the Suntec.

The Scorpions are still very much at the top of their game. 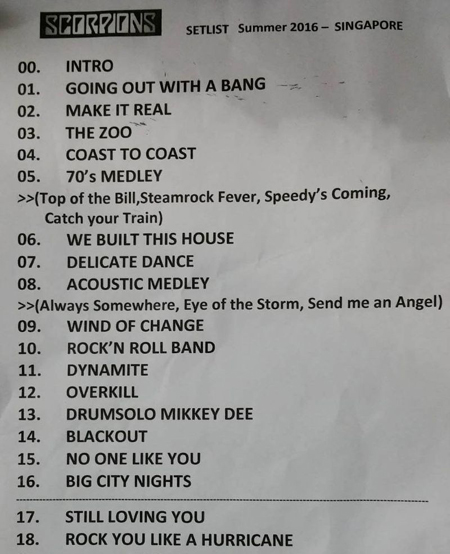 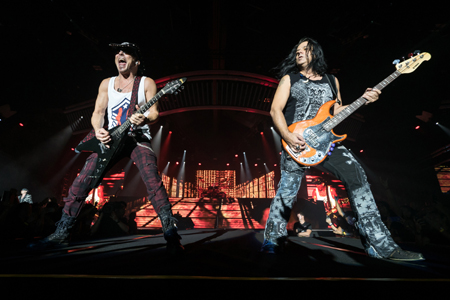 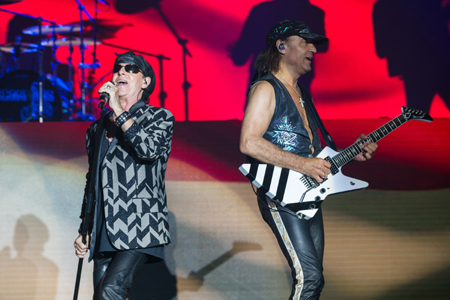 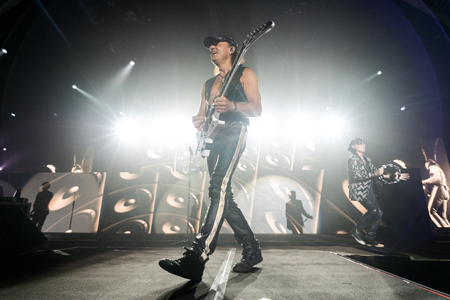 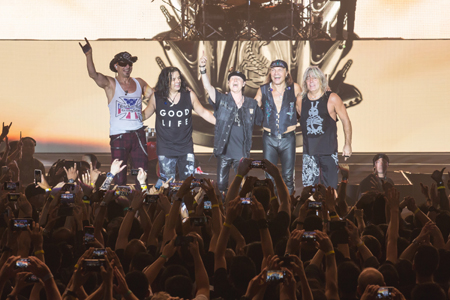 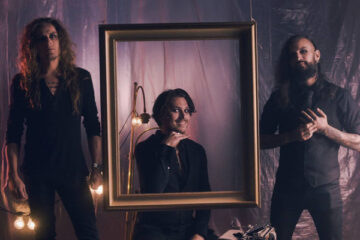