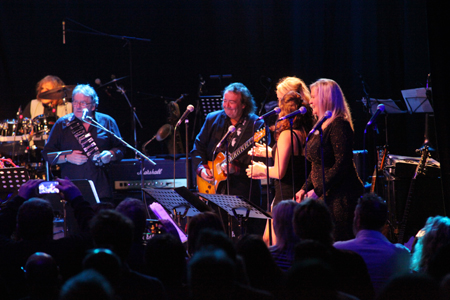 The balcony nearly came crashing down here last last year, hence the reason why the venue was closed for several months, but tonight it was the roof that nearly came off due to some scintillating and spine tingling performances from some of the very best players from the history of blues based hard rock and some of the very originators of Heavy Metal.

Compere Pete Brown put on a quick witted performance full of anecdotal delight and having a history that includes being an original writing partner for Cream drummer Ginger Baker, and later discovering that he worked better with Jack, the pair writing a significant number of Cream songs including ‘I Feel Free’, ‘White Room’, ‘SWLABR’ with Eric Clapton and ‘Sunshine Of Your Love’, he most certainly was not short of material. 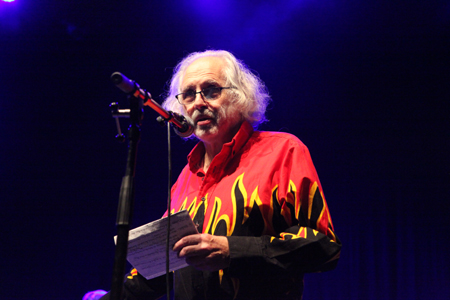 Pete also wrote the lyrics for most of Jack’s solo albums.

Eddi Reader opened the show with a haunting ‘My Love Is Like A Red Red Rose’ before Jack’s bandmate in Spike’s All Star Band, Paul Young, laid his hat and did a sterling job on ‘Born Under A Bad Sign’, a cover version of a Booker T song which appeared on Cream’s ‘Wheels Of Fire’ album, as did his backing band of Clem Clempson on guitar, most well known as Pete Frampton’s replacement in Humble Pie, Mountain drummer Corky Laing and celebrated bass player Neil Murray and the net result of one of the many reshuffles during the evening was one third of original Whitesnake fronted by Terry Reid, the singer who was put forward for the Led Zeppelin frontman’s job but turned it down, paving the way for Robert Plant to achieve fame and fortune.

A lesser known Clem Clempson fact is that in 1977, he formed the short lived band Rough Diamond with former Uriah Heep singer David Byron. Bernie Marsden and Neil Murray on stage together again was a sight to behold, especially with both currently in the form of their lives.

Terry Reid turned Jimmy Page down because he had already committed to a tour with Cream as opening act on the 1968 US Tour, however an alternative reason for his refusal to join the fledgling Led Zeppelin surfaced in a mid 80s article in NME which claimed it was Page’s “heavy reputation as a Crowleyan black magician”, which frightened him away from commitment to the band.

He was later offered a position as a member of Deep Purple when they decided to replace singer Rod Evans, but once again, he declined due to contractual agreements. Ian Gillan was given the position instead and the rest is history.

History was also made by Cream, who are widely regarded as the world’s first successful ‘supergroup’ and one of the outstanding moments of the evening was an early rendition of ‘White Room’ with Mick Taylor on guitar which was truly momentous. Terry told the story about the song’s success putting a proper roof over his head and another notable Bruce-Brown song was a Pete Brown sang ‘Politician’ for which we got the story about it being based on the Profumo scandal.

A real star was required to follow this and keep momentum going and one was suitably delivered as Inglorious frontman Nathan James had jaws hitting the floor with an absolutely flawless and rousing performance of Willie Dixon song ‘Spoonful’, from the 1967 Cream debut album ‘Fresh Cream’.

Nathan received an introduction from Pete Brown befitting a member of royalty and he lived up to it in true superstar fashion, ably backed by Steve Hackett, David Sancious, who played with Bruce Springsteen and on Jack’s 1980 album ‘I’ve Always Wanted To Do This’ and keyboard player for the evening, Ronnie Leahy, who worked extensively with Jack as well as with Jon Anderson, Steve Howe, on his second solo album and also appeared on four Nazareth albums between 1998 and 2002.

Pete Brown made a tremendous gag about David Sancious trying to juggle playing for both Sting and Peter Gabriel and the punchline, “good luck with that” delighted the audience.

Nathan repeated his spectacular delivery later in the evening and blew the Empire away for a second time with a stunning delivery of ‘Without A Word’ from Jack’s 1976 album, ‘How’s Tricks’.

It was an utter delight to see Bob Harris of Old Grey Whistle Test fame give his thoughts and relay how many of that iconic show’s live performances were recorded at the Empire.

Jeff Berlin, Bill Bruford’s first choice bass player on his solo work between Yes and King Crimson who also played on Ritchie Kotzen’s 1995 album ‘The Inner Galactic Fusion Experience’, arranged the forthcoming album ‘Jack Songs: An All-Star Tribute to Jack Bruce’, which is out in eight days via Pledge and watching the former Anderson Wakeman And Howe (briefly when their bass mainstay, Tony Levin fell ill on tour) four-stringer put in a stealth performance was a sheer pleasure. Trevor Horn and Chris Spedding also deserve special mention for their stellar displays too.

As does former Rolling Stone Mick Taylor, whose most sublime, and there were many, solo was on the outro of ‘Theme From An Imaginary Western’, the original version of which was on Jack’s debut solo album ‘Songs For A Tailor’. 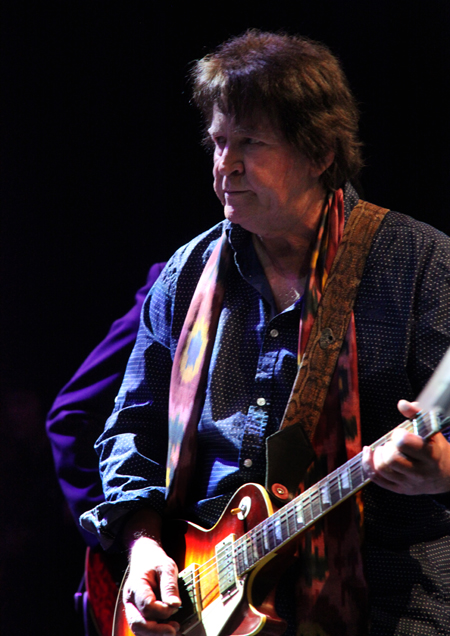 That one heroic song encapsulated the musical legacy that Jack left. Covered by Mountain on album and famously performed at Woodstock, it was magnificent to have Corky on drums. Also, Clem Clempson recorded two versions of the song during his tenures with Colosseum and Greenslade, and provided knowingly sublime counter-point lead to his Stone-age partner.

Jack’s home country of Scotland was extremely well represented with several of the aformentioned performers all having their roots north of the border and that connection continued with two outstanding performances by first Maggie Reilly, who carried us all away on a moonlight shadow with a quite brilliant delivery of ‘Rope Ladder To The Moon’ from ‘Songs For A Tailor’ and ‘Ships In The Night’ from Jack’s 1993 solo album ‘Something Else’ on which she also sang.

Then it was time for the one and only Lulu who totally owned ‘Sunshine Of Your Love’. Her opening salvo to the audience was “The Scottish mafia are here!”, having followed fellow Glaswegian Eddi Reader’s second appearance on stage. Lulu was simply mesmerising and she completely belies her sixty seven years. 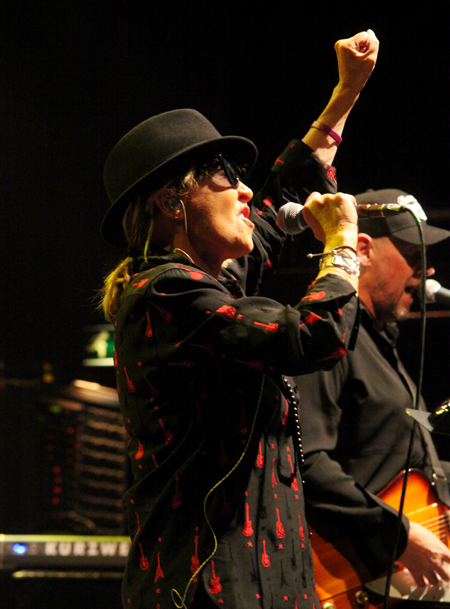 Jack’s granddaughter Maya Sage was also superb on ‘Out Into The Fields’, a Jack Bruce/Pete Brown/Corky Laing song previously described as “one of the best tracks on the never-recorded fourth Cream album”. Maya was accompanied by Gary Moore’s son Jack, an accomplished guitarist in his own right. One of Gary Moore’s biggest hits was of course ‘Out In The Fields’, a duet with Phil Lynott, but whether there was any ironic intention here is unknown.

Jack’s nephew Nico Bruce, played upright bass supremely well on several tracks but unfortunately Billy Cobham was absent this evening, however one person who did appear, against Doctor’s orders, was Ginger Baker who paid this superb tribute to Jack and received one of the biggest rounds of applause of the night.

Jack’s son Malcolm did a highly impressive job of organising this event, bringing the performers all together and making it flow the way it did. Unfortunately ‘I Feel Free’ was omitted due to time constraints but this in no way distracted from what was a wonderful evening. Jack would have loved the classical edge being present courtesy of the string section. 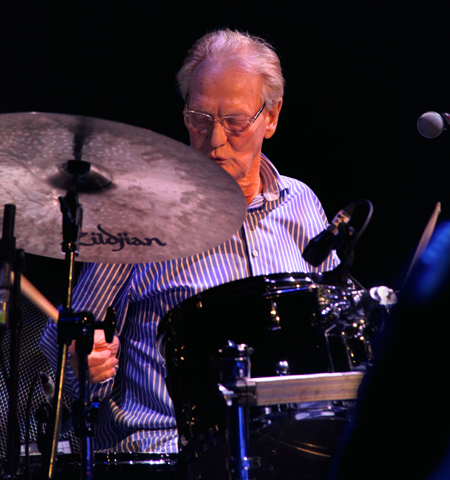 Proceeds were for Jack’s favourite local charity, East Anglian Children’s Hospices who will be most grateful for any donations that you deem appropriate.

Jack left the world with a wonderful musical legacy which we can enjoy for all time so this is a great opportunity to give something back with a heartfelt thanks to a great man and a great musician who will never be forgotten.

This was a celebration by the musicians and friends Jack knew, for the people that still cherish his musical legacy and it was joyful and uplifting with many performances that will live long in the memory. 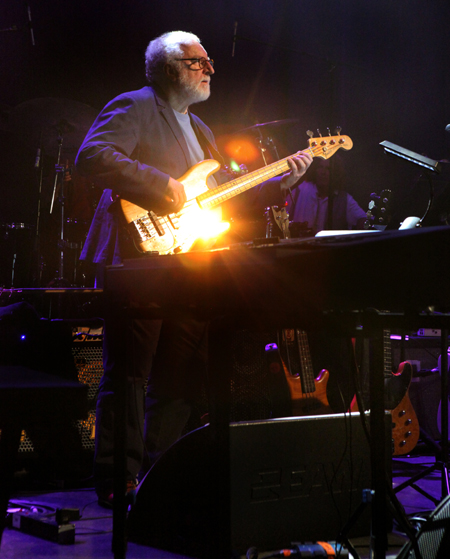 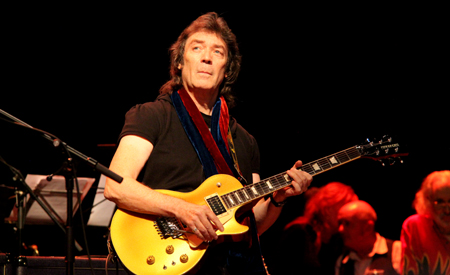 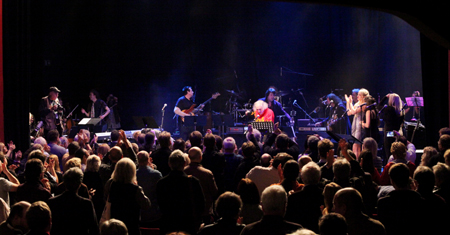