Axl told BBC 6 Music that he is a huge fan of Johnson’s singing and “wants to do it justice” and also states that he means “no disrespect” to Johnno.

The eyes of the world will be on Lisbon tomorrow night (Saturday 7th May 2016) when Axl makes his debut with the band at the Passeio Maritimo de Alges.

Axl told the BBC: “I’m happy and excited in one sense, but I think it would be inappropriate to be celebrating, in a certain way, at someone else’s expense. That’s not what I’m here to do. It’s an unfortunate situation.

There has been a lot of negativity over the move to replace Johnno with Axl after the Geordie singer was advised by doctors to stop touring immediately or risk total hearing loss. Due to the uproar when Axl was announced as replacement the band made a goodwill gesture by offering fans a refund on tickets and those that were refunded were quickly resold.

Clearly the situation was unavoidable, however some sections of the AC/DC fan base were disgruntled because they felt that Johnno had not been treated correctly and the man who replaced the late Bon Scott in 1980 put out a statement last month (here) saying that the whole situation was the “darkest day of my professional life” and that he was “personally crushed by this development more than anyone could ever imagine. The emotional experience I feel now is worse than anything I have ever in my life felt before.”

However guitarist and the last founding member still playing in the band, Angus Young, explained he had spoken to Johnson extensively before he decided to leave the group.

“In his heart he wanted to finish the tour but because of that hearing factor he had to make the decision,” Angus told the BBC.

“It’s a hard thing to do, and he’d had the problem since we kicked off touring. It was his call. It was a shock to us too.

“The last thing you want to do is walk away from something, but you don’t want someone in a tragic situation; being deaf, or any other affliction.”

Angus also pointed out that the band had “seen our fair share of tragedies”, including the retirement of his brother and fellow founding member and guitarist Malcolm Young who is suffering from dementia and of course the death of Bon. 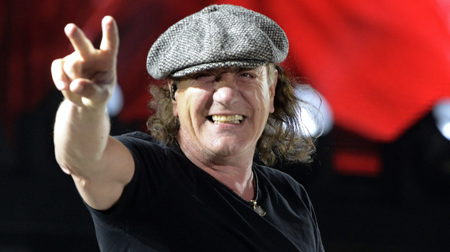 “After that you’re doubly careful,” he said. “You want band members to be leaving in full body shape, not in a tragic way.”

And Axl revealed that it was his initiative to approach AC/DC about replacing Johnno.

“I called the day I read about it in the news, that there was a situation going on with Brian’s hearing,” the Guns N’ Roses frontman said.

“I called a guy who’s their production manager right now… because I knew there was going to be a problem with having dates on sale and dates sold and stuff like that. So if I could help, and if I was able to do it, and they were interested, I’d love to help. And that’s how it started.

Axl also said he didn’t know whether he would be able to sing some of the songs in the set:

“A lot of the ‘Back In Black’ stuff is really challenging. I’m not here in any way out of any disrespect to Brian. I can’t take anything away from his singing at all,” he said.

“He’s a great singer and it’s really challenging to sing it. I’m just trying to do it justice for the fans.”

Guns N’ Roses reunited with original guitarist Slash for the first time since the 1990s earlier this year and are touring the USA between June 23rd and August with European dates expected to be announced soon. AC/DC have twelve European dates which finish on June 12th and ten American dates still to reschedule. Axl will be alternating between both bands.

That’s two of the world’s biggest ever rock bands and two of the biggest tours across all musical genres that will take place this year.

Matt Everitt’s full interview with AC/DC and Axl aired on the BBC 6 Music Breakfast show at 7am BST this morning, Friday 6th May, and we are expecting a podcast to be available later in the day.