Recently I’ve been chatting to Martin Swan and John Allerton, both soldiers in the British Army as part of the United Nations force in Sarajevo in 1994.

These two men risked their lives to take Bruce Dickinson and his crew and band, including myself, out of Sarajevo after the concert to Kiseljak, where we could board a helicopter to take us to Split in Croatia, away from the fighting.

I recalled the journey through the frontlines and Bosnian Serb Army checkpoints in Part 3 of my Scream For Me Sarajevo articles but although I found the journey scary, until I spoke to Martin I never realised how close to serious danger we had actually come.

Martin told me: “On the way out through the city as we went to Kiseljak to get the helicopter, I remember we didn’t have all the right paperwork and kind of barged our way through the checkpoint.

“After I dropped you all off and I returned, the border guards had a massive go at me and told me they had actually taken aim at the vehicle, taken their safety’s off and were about to open fire.

“Not sure why they didn’t but they were pretty upset about the whole thing.

“I was quite concerned about it at the time. Almost more of a worry finding out later than it actually happening. Does make you realise you weren’t really ever safe.

“I remember talking to a girl in the crowd at the gig and her face had loads of tiny scars in one side and it turned out that while walking in the city with her best friend a sniper shot her friend in the head and the scars on the girls face were caused by skull fragments from her friend. You just can’t comprehend that happening, let alone having a lifelong reminder like that.

“By the way, it was a pleasure to help out. I’m so glad I could be a part of something that brought some good to such a bad situation.” 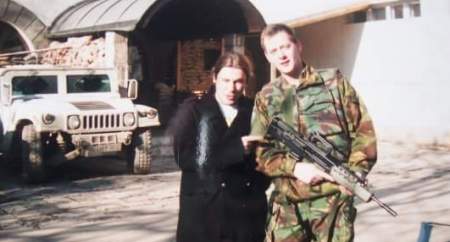 Scream For Me Sarajevo has since been made into an award winning documentary and is due for general release in 2017.

Scream For Me Sarajevo Pt 1

Scream For Me Sarajevo Pt 2

Scream For Me Sarajevo Pt 3.