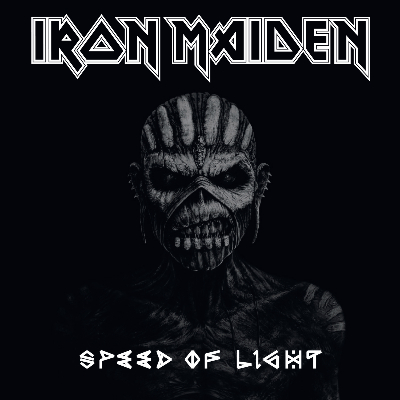 Great news to begin Friday as Iron Maiden have just premiered the video for ‘Speed Of Light’ on their official website:

Written by guitarist Adrian Smith and vocalist Bruce Dickinson, ‘Speed of Light’ is taken from their new double album ‘The Book Of Souls’ due for global release on 4 September 2015 through Parlophone Records (BMG in the USA).

The video is available for streaming free on both www.ironmaiden.com and the band’s YouTube channel.

Maiden fans can also download the ‘Speed Of Light’ song when pre-ordering The Book Of Souls on iTunes or Amazon MP3. It can also be streamed on Spotify and Apple Music.

The video was produced and directed by Llexi Leon with animation and visual effects by The Brewery Production Company. A huge Iron Maiden fan, this is Llexi Leon’s first music video.

The video is an ‘homage’ to four decades of video-gaming juxtaposed alongside Iron Maiden’s incredible visual canon of the past 40 years, centering on their talisman, Eddie, as he travels through space and time to complete his Herculean task.

The Book Of Souls is Iron Maiden’s 16th studio album and was recorded in Guillame Tell Studios in Paris with longstanding producer Kevin Shirley.