The first word I ever wrote about Motörhead was “WOOOOOARRRRGHHH!!!” (give or take a few Gs, Hs and !!!!). I was young, a mere fledgling journalist writing for fold-out poster mag Metal Fury in the early eighties and, well, devoid of verbally elegant equivalents, this explosive string of letters seemed to sum up not just Motörhead’s music – but EVERYTHING about them.

Besides, the great empire of Metal has been built from creative onomatopoeias…and who needs elegant prose in rock’n’roll?

At that time, around 1982/3, Motörhead were the loudest band on the planet – and I was a naive 23-year-old Metal fan-turned-journalist given the privilege of interviewing – oh my God! – LEMMY!! I’m sure I was shaking, giggling, gawping in my green-behind-the-ears naivety – but surely a sign of true fandom.

I interviewed Lemmy many times, interviews inevitably evolving into pissed all-nighters at The Funny Farm in Camden, Lemmy’s regular hangout at the time – and eventually at Lemmy’s pad in Portobello Road.

Wherever Lemmy lived, whether in London or LA, the Nuremburg Rally would be playing and replaying in the background on his TV. Lemmy wasn’t a Nazi fan – he explained his fascination for Hitler as a respect for ‘the power of the orator’. He was not a man to beat about the bush.

In that Portobello Road flat one night, I remember The Clash’s drummer, Topper Headon, crashed out on the kitchen floor and Lemmy stashing me in his flatmate Motorbike Irene’s bedroom, where I spent the entire night staring in horror at the massive python slithering around in its glass case in the corner…I think I was being punished for something, I can’t really remember.

I do remember one Lemmy incident after being flown to LA in the early nineties to interview Megadeth for Metal Hammer with photographer Andy Phillips. We arrived a day early, and I proposed to Andy that we visit Lemmy who, of course, had moved there recently. I took no heed of Andy’s warning that perhaps it wasn’t a good idea – and would I be in any fit state to interview Dave Mustaine in the morning?

So we both went to Lemmy’s studio – and I recall the first sight of Lemmy that day bending over the pool table in the smallest pair of denim shorts I’ve ever seen on a bloke…and the familiar sight of him digging in his pocket with his key, scooping out of the contents and asking if I’d like to indulge?

Of course, Andy was right – but, bless Dave Mustaine, when I mentioned I’d seen Lemmy the previous day, he patted my hand in sympathy and treated me very gently, providing me a very fine interview indeed. 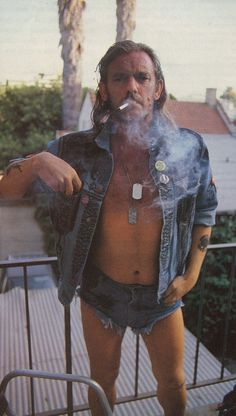 Lemmy in the infamous short shorts…

Motörhead were the band who bridged the so-called animosity between headbangers and punks in the early 80s, making both realise that our aims were not dissimilar, expressed in anti-establishment, loud, rebellious three-chord onslaughts of crushing dissonance – and I feel proud to have been there those years, regularly in touch with Lemmy as he became the God of Noise.

We were friends for many years until the mid-90s when we fell out badly – my fault. I questioned my life and motives as a journalist at a time when publishing houses were growing ever more ruthless and, indeed, self-destructed my own career at Metal Hammer as a result.

Yes, I came back – but although I interviewed Lemmy a couple of times after that, I never really had the chance to make up with my old friend, and to say thank you for some truly extreme rock n’roll experiences.

Thank you my friend – and I’m sorry.