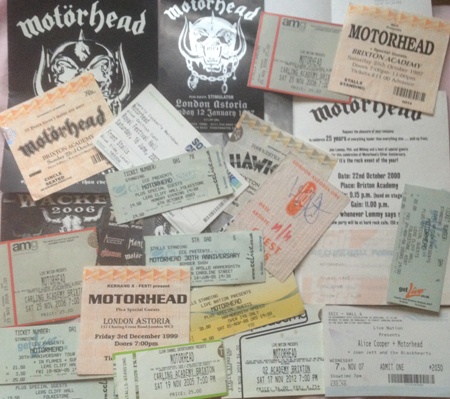 We knew it was coming, it was inevitable, as much as Lemmy had built up an indestructible image of himself as the man who could calmly walk out of the mushroom cloud of Armageddon with a glass of Jack Daniels in his hand and a Marlboro hanging from his mouth, the truth was becoming clear.

Lemmy was ill and the realisation that he was not immortal was becoming evident.

That realisation became clear to me when I was at the Wacken Festival in 2013 on a incredibly hot scorching day to see Lemmy only lasting six songs before he had to bow out with heat exhaustion. I honestly thought that would be the last time I would ever see my boyhood hero up there on the stage.

But Lemmy was made of stronger stuff than others. His bloody mindlessness of “never letting the bastards grind you down” made him carry on touring and even recording new studio albums that defied all non-believers.

Lemmy only knew one life and that was rock n’ roll pure and simple and he was determined to go out in a blaze of glory. Despite shows being cancelled due to his ill health, Lemmy would get right back up and carry on regardless. It was if he was wishing to do a Tommy Copper and die on stage.

I’ve only ever cried twice before over the death of a rock star – Phil Lynott and Freddie Mercury who both left this world too soon. This time though it was different. I was expecting it but was hoping that Lemmy could defy all and just keep on going.

But at 12.30am on Tuesday morning rumours were flying abound and then it was confirmed, first by Eddie Trunk and then by Ozzy Osbourne. My heart sank, I was completely numb and void. I poured myself a large JD but couldn’t even drink it, it was if my own soul had been ripped out of my body. I didn’t know Lemmy on a personal level but it felt like I’ve just lost a very special friend.

You see, Lemmy has been a valuable part of my life for 35 years and most probably will remain so until the day I die.

My parents went through a very messy and damaging divorce in 1979, a rare thing in those days. I was eleven years old and soon became disillusioned with school, home and life in general. I lost all interest in football too but a year later I was starting to enjoy pop music especially the louder stuff. Even when I was six years old, I always got excited whenever bands like Mud or Sweet were on Top Of The Pops.

Now at the age of twelve I made sure that I watched Top Of The Pops every Thursday and also listened to the Top 40 rundown of the charts every Sunday on Radio 1. As I’ve already said, it was the louder stuff that struck a chord with me.

Siouxsie & the Banshees, Blondie,The Specials were the bands that I was taping on my cassette player but my ears were also perking up to the sounds of Rainbow, Gillan and Whitesnake but the real epiphany moment came when I saw Motörhead and Girlschool on Top Of The Pops with their version of ‘Please Don’t Touch’, a Top 5 single no less. By now I had got myself a paper round so I could finally have some money in my pocket and treat myself to buy music magazines like Flexipop which covered Metal, goth, ska and the whole alternative scene. 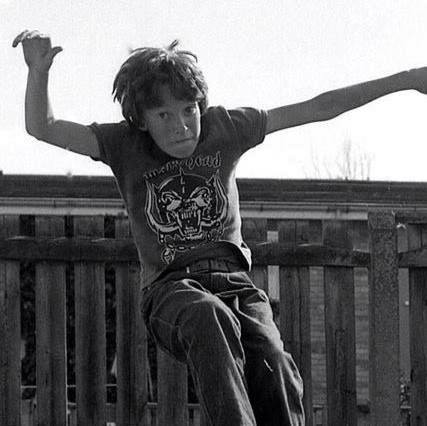 The first Heavy Metal single I ever bought was ‘Motörhead (Live)’ with ‘Over The Top(Live)’ on the B-Side for 99p from Boots superstore in Chatham, Kent. It was a life changing moment and I played that racket to death. Motörhead were also on the cover of Flexipop which had a free Flexi-disc of Motörhead’s live version of ‘Train Kept A-Rollin’, and I immediately went out and bought my first album ‘No Sleep ‘Til Hammersmith’ which was Number 1 in the album charts.

I was hooked on Motörhead, that cranium crashing sound where I could turn the sound up on full blast and annoy the hell out of my neighbours and I didn’t care less, I wanted the world to know. I look at the inner sleeve of that iconic live album and there were these Polaroid photos of Motörhead on the road with Girlschool, photos full of beer, birds and debauchery…this was the life for me when I grow up I thought, I was on a mission in life.

Motörhead soon become the first of everything for me, my first single, my first album, my first Flexi-disc, my first ten inch EP, my first poster on the wall, my first patch, my first pin badge…the list went on. I still remember strongly how proud I was of my first band t-shirt which featured Motörhead’s iconic logo of Snaggletooth on the front. It was only an unofficial iron on transfer, but it didn’t matter. At last I had an identity in life – I was a Motörheadbanger! 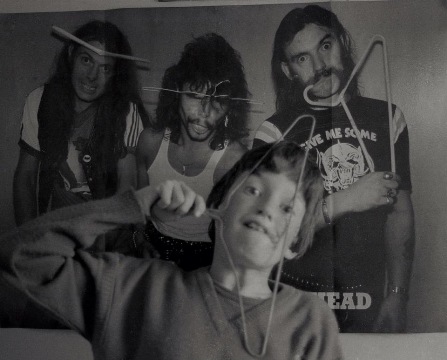 I backtracked and bought all of Motörhead’s back catalogue of singles and albums. Motörhead well and truly opened the floodgates for me as I was now getting into the sounds of the NWOBHM getting heavily into bands like Saxon, Tygers Of Pan Tang and Iron Maiden. I no longer listened to the alternative scene, it was Metal all the way with a little splatter of punk.

It wasn’t until I left school and got a job that finally I could go to concerts. My first live experience of Motörhead wasn’t until 1986 at the Monsters Of Rock festival at Castle Donington. By then then Fast Eddie Clarke and Philthy Phil had left the band and Motörhead had became a four piece but the message was still loud and clear. Lemmy took no shit at that show when someone shot a flare onto the stage forcing Lemmy to stop mid song and offer the ‘fan’ up on stage for a knuckle sandwich.

But the real Motörhead experience is witnessing them at one of their own shows. The first show I saw was at Folkestone Leas Cliff Hall, an intimate venue by Motörhead’s standards but one that they often returned to. On this occasion the volume was fully turned up way past the max, not to 11 but all the way to 14. It felt as if my ears were about to bleed, I went to the bar just to escape the cacophony of sound and all the windows in the bar were shaking violently with the volume. The bar staff looked terrified.

Over the years I must have seen Motörhead about 50 times at their own shows and various festival slots, but going to see Lemmy and his gang in action was a totally unique experience. It was a united bringing together of both punks and Metalheads all fuelled up on beer. Lemmy would stand there with his Rickenbacker bass played like a lead guitar, head held upwards as he growled into his microphone as the band smashed all sensibility out of your brain, flattening it into a pulp.

My most memorable live performances from Lemmy was over a weekend in 2000 when on the Saturday night at the Brixton Academy he performed some songs on an all-nighter gig from his former band Hawkwind, followed by Motörhead celebrating their 25th anniversary at the same venue a night later in a varied set that included guests Doro Pesch, Whitfield Crane, Brian May, Fast Eddie as well as his own son Paul Inder.

I’ve been fortunate enough to meet Lemmy on three occasions. The first time I was a complete fan boy and I managed to blag my way into the aftershow after a mind blowing sold out performance at the Astoria in London. It was the stuff of dreams, the whole of Girlschool was there as was Fast Eddie Clarke. I nervously approached Lemmy and I told him how much his music has meant to me over the years. He looked me into the eye and promised “I’ll never let you down.”

The last time was only last month at the Classic Rock Awards when I was working on the red carpet. Lemmy looked frail and walked in with the use of a walking stick which he soon handed over to his minder. He still looked the epitome of cool, dressed dapper like a true rock ‘n roller. He ignored questions about his health only wanting to talk about the music. 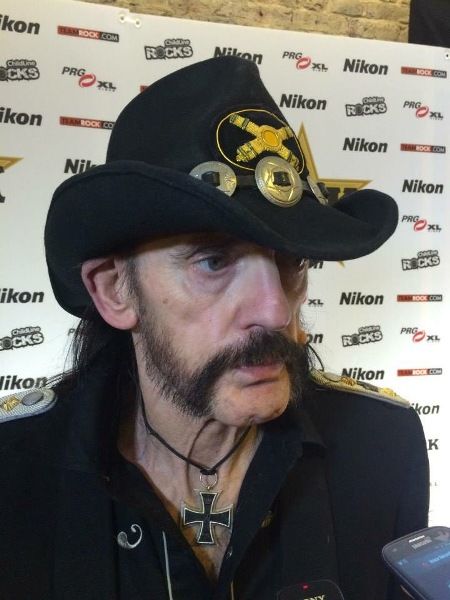 When he left the building towards the end of the evening, Lemmy looked over at me and slowly lifted his hand to wave goodbye. It made my night, although I had an eerie feeling that that would be the last time that I would ever see Lemmy. Sadly that proved to be true.

Ian ‘Lemmy’ Kilmister, you most certainly have never let me down. A man who who really is the stuff of legend. You walked it like you talked it. Thank you for the wonderful years of music and insightful intelligent interviews.
Your music and attitude in life is immortalised in us all.

I couldn’t write this article the day after Lemmy’s death, it was still too soon. Instead Cliff Evans, the guitarist in Tank, called me up and said we should go down to Hammersmith Odeon (That’s what it always will be called as far as I’m concerned) to have a drink in Lemmy’s honour. MetalTalk Editor Steve Göldby joined us as did friends Steve Barker, Tim Rahman, Mark ‘Woody’ Wood and Andy Rawll. 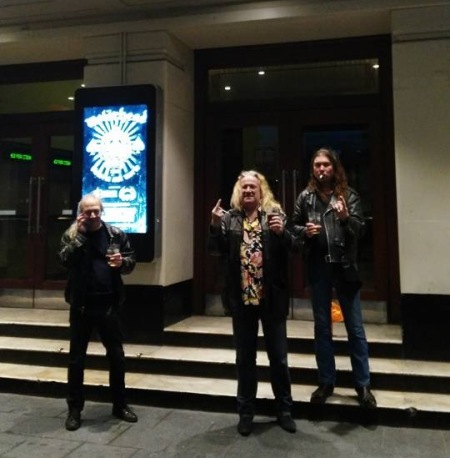 After polishing off a bottle of Jack Daniels on the steps next to a poster advertising Motörhead’s proposed shows in January at this venue which has witnessed so many glorious nights from Motörhead, we adjourned to the Duke Of Cornwall pub next door where they were playing the music of Motörhead non stop in his honour.

A full nine hour drinking marathon ensured way past closing time. I woke up with a full Motorheadache…Lemmy would’ve been proud.