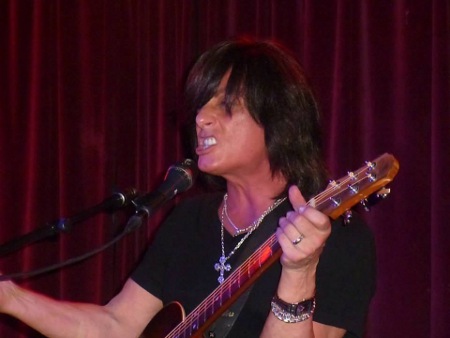 Former Rainbow and Deep Purple frontman Joe Lynn Turner is currently touring the UK with ‘An Evening With Joe Lynn Turner’ billed as an intimate, acoustic evening of songs, stories and tales from a career that spans over thirty years and includes over sixty album credits with Joe promising to take us “through a rollercoster ride with songs and stories”.

And “intimate” was exactly the right word as the whole event had a very informal feel to it with Joe holding conversations with audience members between numbers and answering any questions that came his way, including the burning one – are the Rainbow reformation stories he has been telling recently true? We’ll get to that shortly.

He’s a very, very good acoustic rythym guitarist is Joe and the highly entertaining stories and anecdotes flowed with ease and there were some superb moments in last night’s show, despite some remarkable additions to the setlist.

When we were treated to songs that Joe originally featured on, namely ‘Street Of Dreams’, ‘Stone Cold’, ‘King Of Dreams’, ‘Love Conquers All’ and the Hughes/Turner Project track ‘Mystery Of The Heart’, it was absolutely enchanting and a real pleasure to hear those songs in their stripped down form, especially when Joe had a story to tell behind each number.

However, three consecutive Beatles songs along with covers of Van Morrison’s ‘Moondance’ and The Doors’ ‘Roadhouse Blues’ really didn’t have a place in this set and although played superbly well, there is no doubt at all that the audience would have much preferred some more Rainbow numbers and more homage to his time with Yngwie J Malmsteen instead.

‘Catch The Rainbow’ and ‘Smoke On The Water’ were also odd choices, the former because although Joe used to perform it in Rainbow, Ronnie James Dio is the original vocalist and the latter because it was just an uninspired choice. You know those semi-joking signs that you see in guitar shops that say “Anyone playing ‘Smoke On The Water’ will be asked to leave…”

There was some truly superb story telling last night, for example did you know that ‘Stone Cold’ was written about Roger Glover’s divorce and that both Bob Daisley and Jimmy Bain are both serious contenders to be in the reformed Rainbow?

Now we don’t necessarily believe the latter anecdote because both are bass players and while music is evolving all the while, a two bass player format has yet to be tried in a classic heavy rock band.

Also, neither Jimmy Bain or Bob Daisley were in Rainbow when JLT was a member as Roger Glover played bass from the ‘Down To Earth’ album onwards.

Joe was gloriously indiscreet about “multi-million dollar deals with Live Nation”, Ritchie Blackmore’s mother-in-law and the alleged Rainbow reunion. We asked him directly whether the reunion was “on or not?” and he was adamant that it was.

Joe said that the reformation will take place “this fall” and this was absolutely stated as a “definite”.

Despite numerous reports on Monday that Joe had said this “after the show”, he actually said it between ‘Stone Cold’ and ‘Street Of Dreams’ and he said it in response to our direct question to him. No other members of the music press spoke to Joe on Sunday night.

And regarding previous attempts at reforming Rainbow, Joe said: “We had multi-million dollar deals set up with Live Nation. A 60-day tour to start with, HD 3D movie, everything – and then he [Ritchie] had to finish the [Blackmore’s Night] album.”

And he also indiscreetly stated that Blackmore’s wife Candice and her mother Carole Stevens could potentially scupper a reunion, saying: “Unless his wife or mother-in-law gets in the way. She drives me fucking crazy.” 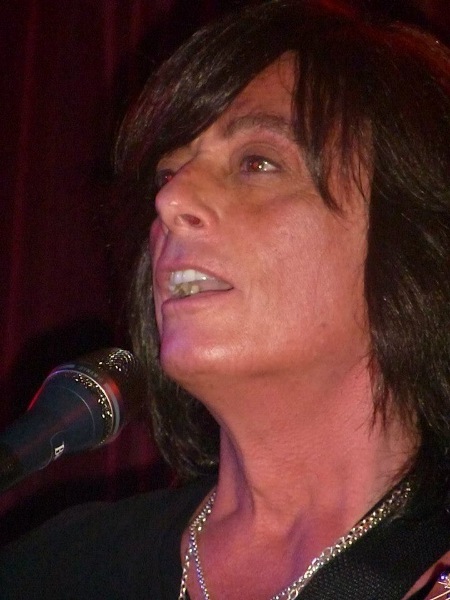 David Coverdale has been recently quoted as stating: “I think Ritchie will be doing some rock stuff again.”

Everyone wants to see Ritchie Blackmore playing hard rock again and we are sure this will happen at some point but it is completely unclear in what guise exactly. Rejoining Deep Purple seems a far fetched notion so Rainbow seems his best option, commercially.

However, Ritchie has always tried hard to be unpredictable and do the totally unexpected so a brand new project or Rainbow with a totally new and possibly unknown singer should also not be ruled out at this stage. Whatever happens, it sure is going to be exciting.

Maybe Joe was trying to be unpredictable by including ‘Roadhouse Blues’ in his set. We’re not sure where he’s going with that gun in his hand but if it is towards a Rainbow reunion with Blackmore, we’ll welcome it with open arms. Long live rock n’ roll! 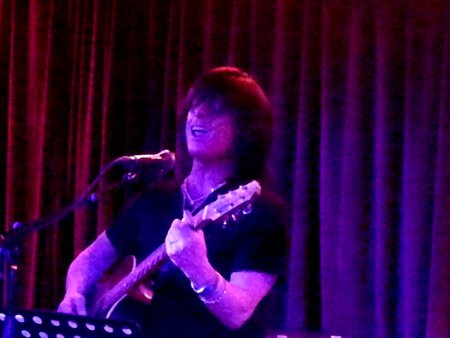 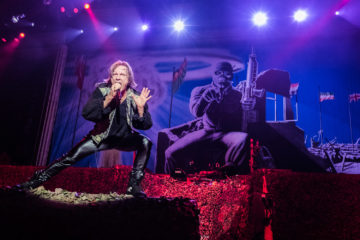