Hot on the heels of their recent sell out reunion tour with ex-members John Coghlan
and Alan Lancaster, Status Quo stalwarts Francis Rossi and Rick Parfitt are set to star
in their debut feature film due for release in July 2013. 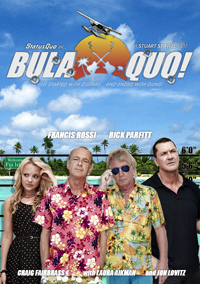 Titled ‘Bula Quo’ the film, which was produced and directed by Stuart St Paul (‘The
Krays’ and ‘Aliens’), is an action adventure story filmed on location in Fiji and co-stars
Laura Aikman (‘Keith Lemon – The Film’), Jon Lovitz (‘Saturday Night Live’, ‘Two and
a Half Men’), and Craig Fairbrass (BBC TV’s ‘Eastenders’).

In the film, Rossi and Parfitt both witness a murder and go on the run with their
manager, Simon (Fairbrass), and Caroline (Aikman) while being pursued by Wilson
(Lovitz) and the members of the Press who are eager for a story.

Francis Rossi commented, “The one thing Quo fans know is to expect the unexpected.
Of course, Rick and I have already acted in Coronation Street, one of the biggest TV
shows on the planet, so this should be no trouble at all! According to management…”

“Once I found out that we weren’t going to be shooting anywhere cold, I was all for it”
adds Rick Parfitt, “This is an amazing chance for us to do something new and we’re all
really excited.”

The film is the first production from the newly incepted Status Quo Films (Fiji) Ltd, and
is also supported by the Fiji Audio Visual Commission (FAVC). Stuart St. Paul said: “We
have been made to feel so welcome by everyone. Fiji isn’t just a paradise because of its
location; it is also because of the wonderful islanders who cannot do enough for us. The
production team is grateful for the support from the Fiji Government and Tourism Fiji
without which none of this would be possible.”

A soundtrack to accompany the film is also expected later in the year, which features
some remixed versions of Quo classics like ‘Rocking All Over The World’ and ‘Down
Down’ as well as some tracks penned specifically for the film like ‘Go Go Go’, ‘Looking
Out For Caroline’ and the title track.