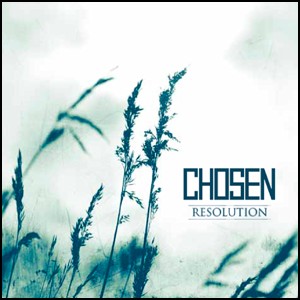 The debut full length release ‘Resolution’, from Irish death metal duo ‘Chosen’ follows a series of well
received EP’s since their inception in 2005. The album stands as a testament to their sheer perseverance
which has paid off against the odds. The band moved from Ireland to Canada and back again, losing
two members in the process yet still managing to produce an album of an exceptional standard.

It’s innovative, with a high standard of musicianship throughout and with tracks which are well-
crafted and inventive in their composition. The sound is rich, multi layered, and at times crushingly
heavy using a broad range of elements from the full spectrum of extreme metal. The vocals,
both harsh and clean, are excellent, which is something I am always highly critical about. The resulting
album I found to be a truly refreshing and inspiring piece of work.

Powerful Celtic influenced drum work opens ‘Engines of Belief’ and the first thing I noticed was
the impressively full sound. There is also a good balance between the clean and
harsh vocals. The sheer intensity to the drum and guitar work on ‘Defective Prospection’ almost
overpowers your senses and is such a great track.

There is a long melodic and haunting intro of almost two minutes before the more intense
elements kick in on ‘The Narcissism Epidemic’. The frequent interchange between melodic and
extreme, clever construction and use of varied tempo keeps you fully engaged for the whole
seven and a half minutes.

A sinister opener on ‘Mental Clarity’ is followed by a technical groove that runs throughout and is
mixed with chugging riffs. ‘Chosen’ are a band that are not afraid to reach across all genres of metal
to mix and match in interestingways and that works so well for them. This is fully
evident from the mix of elements incorporated into this and other tracks.

There is a very appealing and extreme contrast between the gentle elements set against the harsh
vocals and chugging groove on ‘Diminishment’. The drum work is superb, as on all tracks, but really
adds so much here as it seems to bring a darker edge to the
quieter moments. On ‘Instinct’ there is a sexy little djent groove happening, add to that chugging,
soaring riffs and a fabulous little solo midway and what you have is an excellent track.

A quiet, yet sinister sound-scape opens into a gritty spiralling and chugging groove that is catchy and
addictive on ‘Asch’s Paradigm’. On ‘Metaphysical Contradiction’, groups of hypnotic repeat riffs add a
dark, intense feel. Along with a couple of great tempo and direction changes the track grabs your interest and
delivers a real feel of turmoil and conflict.

The strong djent groove that is mixed with dark riffs gives an intense and frantic feel to the extended
intro on ‘The Departure Lounge’. The respite from this intensity comes from the clean vocal choruses. In the final minute you are released from its grasp as the track gently fades away forming a great end
to an excellent album.

Chosen will release Resolution as a free download from their official site from March 30th
http://www.chosen.ie/

Artwork is by Fiaz Farrelly. The album was recorded at Westland Studios in Dublin with producer
Alwyn Walker; additional vocals are by Jackie McNally and Fiona Morrin is on fiddle.

Resoloution is an excellent album from beginning to end and at times, is an absolute face ripper, I
was completely blown away by it; these guys are hugely talented and deserve every success form
this and once you have gotten your free download and heard just how good it is you should then go
and buy the album, you won’t be disappointed.

MULTIPLE SCLEROSIS: AN INSIGHT INTO THE DISEASE THAT TOOK CLIVE BURR