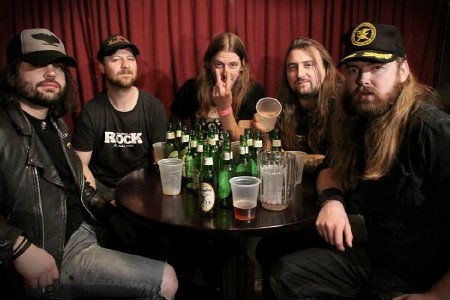 It’s been a long time coming but our home-grown Vikings are back with their best offering to date!

Formed amidst the Steelworks town of Corby, Northamptonshire, their very own first chapter was born: ‘Chapter One’ (released on the Grand Union Label) and set the scene for Viking Skull. Top notch reviews were abundant and a landmark 11/10 review from Metal Hammer lead the band to secure a busy touring schedule supporting the likes of Alice Cooper, HIM, Clutch and Dio!

2005 saw Viking Skull release ‘Born In Hell’ (Grand Union Label/456 Entertainment) but we believe a bottle or two of Absinthe is to blame for what then became a two year break… isn’t it always!

The aptly named ‘Chapter Two’ was recorded in Philadelphia, PA, after signing a deal with Bam Margeras record label ‘FilthyNote’ and featured guest appearances from Reverend Jim of Fireball Ministry, the Brandywine Eel of Gnarkill, Unkle Matt And the Shitbirdz, and Chad I Ginsburg of CKY but it was ‘Doom, Gloom, Heartache And Whiskey’ that was last installment from a band who consistently delivers it’s own potent brand of dirty Rock ‘n’ Roll Metal.

The comeback earned them another tour with Clutch and a string of headline dates in the USA, including one notable appearance at Bam Margera’s venue ‘The Note’ in West Chester, where he also directed the video for album track ‘Hair Of The Dog’.

‘Cursed By The Sword’ sees original member Frank Regan return to the line up as they bite back with their hardest hitting material to date, proving that this band should never be underestimated. This record is a welcome release amongst all that is ‘scene’ and trend-y: it is unashamedly music for Men.

The whiskey soaked riffs are sleazier, yet the hooks are undeniable as they invite the listener to join them in their oily pit of mud, blood and beer. This is what we came here for, this is what it’s all about, Viking Skull have delivered everything we hoped for and more!