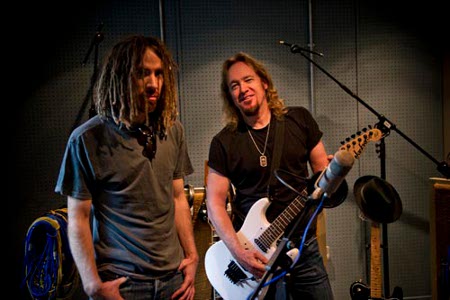 The forthcoming album fuses together two very different approaches to music – Mikee’s unique vocal tones and dark, yet colourful lyrics, and Adrian’s instantly recognisable guitar melodies and song writing prowess. Adrian also plays bass throughout the album! All songs were co-written by Adrian and Mikee as individual pieces of work and recorded in creative windows of opportunity.

Adrian comments “It was interesting doing this album with Mikee not least because we have quite different influences. I was really pleased with the way it turned out. It has a really fresh feel to it.”

Mikee explains “This album takes you on a really deep and colourful journey, lyrically and musically. Adrian and I were both very open to experimenting with each others’ musical styles and influences, which we feel created something new and exciting.”

Session musicians who also contributed to this forthcoming album include Abi Fry of Bat For Lashes, plus original SikTh member Dan ‘Loord’ Foord on drums, amongst others. The resulting album, is due for simultaneous worldwide release on Spinefarm Records on 27th February 2012.

To hear the track ‘I See Lights’ from the forthcoming album, just hit the player below. Further announcements will be made soon.

I See Lights by PrimalRockRebellion