Chris Dale’s Metal Meltdown: How Not to Join the Ozzy Osbourne Band

Years ago, we’d just finished recording the Bruce Dickinson album ‘Skunkworks’ and I had a night off so I went to see Ozzy Osbourne playing at Nottingham Rock City.

It was a great gig. The band was Joe Holmes on guitar, Geezer Butler on bass and the late Randy Castillo on drums. After the show I went backstage and the promoter and all round top guy, Andy Copping, introduced me to Joe Holmes.

Joe was sweet. Instantly we hit it off. I said I loved the show but wished there was more from the ‘Diary Of A Madman’ album in the set. He agreed and said it was his favourite Ozzy album and that he used to take lessons off Randy Rhoads when he was a kid.

He said he was writing stuff for Ozzy now. He was trying to keep the old vibe in new songs but also update the Ozzy sound, I said we were doing a similar thing with Bruce on our new stuff. 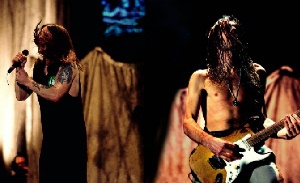 He went and got his guitar and sat in front of me playing some new riffs he’d been writing for Ozzy. They were awesome.

I asked what Geezer was playing on bass to the these riffs? There was one riff that I said if I were doing it, I’d chug an A through that first part then follow his little descending lick at the end.

Joe turned to me and asked “Are you looking for a gig?” I was stumped.

He said: “Why don’t you come to the London show?” I said I wasn’t planning to but I might come along.

He said: “Come on down to soundcheck too.” I said I didn’t want to get in the way if they were busy.

That night I went home and thought about it all. Had I just been asked if wanted to join the Ozzy band? No, that was just too crazy.

Then I realised I didn’t ask what time they usually soundchecked. Some bands like to soundcheck nice and early, get it out of the way, then go and eat. Other bands like to eat first and soundcheck just before the doors open.

I didn’t know anyone on the Ozzy crew to ask, so I rang Geezer Butler’s press guy at the time, Robert Adams, to ask him. He’s a good friend of mine and plays guitar in Sack Trick sometimes. 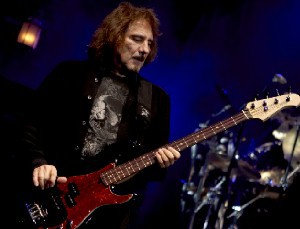 He said: “I don’t know, Geezer never goes to soundcheck. And besides, Geezer’s leaving the band at the end of this stretch of the tour to concentrate on his GZR album.”

The Sherlock Holmes in me has picked up a scent… Joe asked if I wanted a gig, Geezer’s leaving the band, Joe’s invited me to soundcheck and Geezer never soundchecks.

I might be a bit slow here, but he’s basically asking me if I want to audition for the Ozzy Osbourne band in soundcheck at Brixton Academy, isn’t he?

Now, here’s the real dilemma. All my life I’ve dreamed of being in the Ozzy band. I guess most heavy rock musicians have had that dream, following in the footsteps of Randy and Jake, Bob and Rudy…

But I was already in the Bruce Dickinson band, also a dream come true. And with the ‘Skunkworks’ record we’d just been making, we had a record we were really proud of and an upcoming world tour. 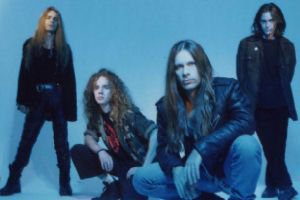 Guitarist Alex Dickson and drummer Alex Elena in Bruce’s band were great players and best mates. Not to mention the fact that we also had another good mate, Bruce Dickinson, in the band, who incidentally is an incredible singer. I already had my dream band.

It was a tough choice. Do I go down there or not? Maybe I’d pop along just out of curiosity. What would you do?

Then Bruce’s manager Merc Mercuriadis rang me. He’s a funny guy. I never knew how to take him. One minute he’d be nice as pie, the next he’d be pouring abuse at me.

This was one of those pouring abuse days. For reasons best known to himself, he choose this day to tell me that I “looked like a piece of shit”. Then he asked out of the blue: “What CD are you listening to most these days?”

“‘Diary Of A Madman'” I said, and put the phone down. I went and put the CD on and started learning songs.

So the next day, I went down to Brixton Academy early in the afternoon and met up with Joe again. He was very cool. He said he’d been playing guitar all day the day before and had hurt his hand playing so much. But he still played more.

Then Geezer Butler turned up. It was the first gig of the whole tour that he’d decided to soundcheck!

I was kind of relieved really. No life decisions to make today. Phew!

I watched the soundcheck, then the gig again and afterwards said a quick goodbye to Joe, must keep in touch and that kind of thing.

A couple of months later it was announced in the press that Robert Trujillo was the new bass player in the Ozzy band. The rest is rock history. 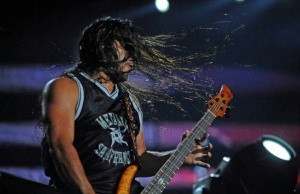 So that was it, I’d nearly played for the Ozzy band (at least at a soundcheck and maybe more if that had gone well). If it had gone very differently I’d have played ‘Bark At The Moon’ at Donington 96, just before Kiss played their first European show with Ace and Peter in make-up in decades. It was nice to have been asked anyway.

At the time I didn’t really take it all in. We were straight into Bruce’s rehearsals and kicking off a European tour sandwiched on the bill between Helloween and Skin… but that’s another story entirely. You don’t want to see those photos…

TIMO TOLKKI: 'STRATOVARIUS WILL NOT EXIST ANYMORE IN FIVE YEARS'

Chris Dale’s Metal Meltdown: How Not to Join the Ozzy Osbourne Band 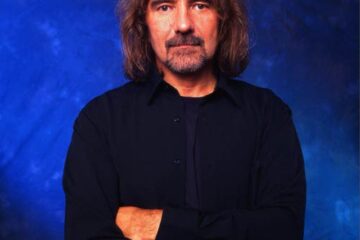