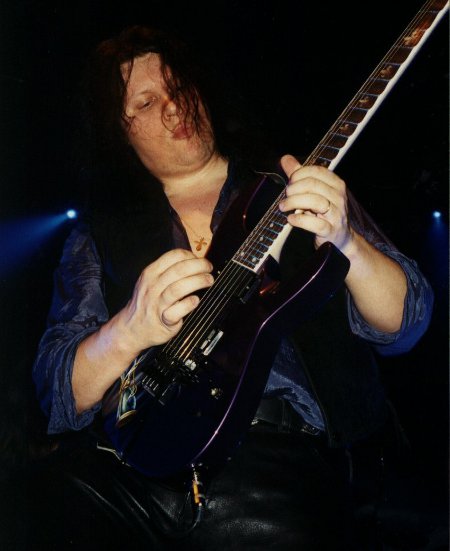 Timo talks about his departure from Stratovarius, his solo albums, the project Strato, and a lot more, only in this interview.

Rock Overdose: You announced a retirement after the fact that Symfonia would not go on as a band, and a lot of fans was surprised from this. What was the story behind of that?

Timo: I simply said that in the present market situation, it is not possible to earn an income by being a professional musician. My career spans over 20 years in Stratovarius plus the other works.

So it was a simple rational decision. We are going to see more bands from the middle league falling in the next 3-5 years simply because record companies are dying themselves and they take the last bits there are to take and it’s gonna make the situation even worse.

It was the same situation with Revolution Renaissance. Music business is firstly becoming boring and predictable and secondly it is dying.

Rock Overdose: But now we have you with us, to play your marvelous guitar, right? You are of the 50 fastest guitar players, according Guitar World. How do you feel with that?

Timo: I think they also voted me being 88th of the most influential guitar player of all time. Well, it feels nice but I know what I can do with guitar. I know my limits and I know pretty much where I can go with it. I am not an extremely technical player, but I am very emotional player. I think my strength is in melodies and in composing.

To me guitar solos as such don’t mean anything. But great songs and great performances do.

Rock Overdose: So, I suppose that you will focus to your solo carrier from now on?

Timo: I dont know man. The same situation applies to a possible solo career. In this moment I am not doing anything and maybe I never will record anything anymore for commercial purpose. We ll have to see what happens in the next years.

Rock Overdose: Your last album of your solo carrier was 2008s rock opera ‘Saana – Warrior of Light Pt 1’. We must wait for ‘Part 2’ now, or?

Timo: ‘Saana’ was a fun album to make to experiment for the first time with 3 singers singing a story. It was very very cheaply done but it does have my key message in it.

My life philosophy is in there. I really don’t think there will be a part two but if I am going to record something still, I am sure it could be something like musical or maybe more rock or Metal orientated story with a lot of dynamics.

Rock Overdose: There are some rumors that some old members of Stratovarius will form a group named Strato. Did they approach you to play with them? Are you thinking to do it?

Timo: Yes its true. We have met many times in the last two years. Me, Tuomo Lassila (the founding member of Stratovarius) and Antti Ikonen went to see Roger Waters’ The Wall in Helsinki together. We have talked about making an album called ‘Return To Dreamspace’. I wrote to Stratovarius and asked if we could use the name for this one album because there is the founding member of the band involved and who invented the name. We got a vicious letter from the lawyer that we will be sued immediately if we would use the name. It just shows the attitude and it is sad to see that a band that once had life and soul in it, is now a simple franchise. A money making machine except that the industry situation gets to them as well. Joerg Michael decided to leave the band because he did not like the music the band was heading to. Now he plays in some Greek band I think. Stratovarius will not exist anymore in five years.

Rock Overdose: Can you tell us how you decide to leave Stratovarius? It was a big surprise for all the fans!

Timo: It was a result of many things. I did not feel I had the support from the band members like I had before to do my vision with the songs. The energy was very negative towards me.

At the same time I was recovering from the nervous breakdown I had in 2004, where not even single band member visited me in hospital.

So the years 2004 up until I notified them were very difficult for me. ‘The Black’ album of Stratovarius I did practically alone in the studio without any support from the band members. So I felt very much alone in that situation.

Johansson claims these things are my imagination but these are factual things that I am telling you.

It was hard for me to be in that circus. I have Bipolar Disorder and it is difficult disease but many artists have had it like Beethoven and Cobain.

The world tour of 2006 I could only play with heavy antipsychotic medicine. I did not tell the band about this. But it was not an easy place to be.

Of course there was the publicity stunt orchestrated by the whole band and put into practice by the Stratovarius manager Antje Lange, who was back then the boss of Sanctuary’s Berlin office. Only she and the band knew about the stunt. It’s funny how they all blame me for the stunt but yet, they were in it all the time themselves. Nobody left. Let’s say I am Hitler and Johansson is Goebbels and Kotipelto is Goering. We all did it. But are Goebbels and Goering innocent? Or if Hitler has Bipolar Disorder, does it mean that Goebbels and Goering in this instance are actually to blame? These are legitimate, good questions.

Of course there were other things as well. You know we had a very succesful 1996-2003 because the evolution of the music was working. But as in every band, there are strong points and weak points. Kotipelto was the weakest point of Stratovarius. If I could have persuaded Michael Kiske to join Stratovarius, it would have been completely different band. Especially live, I got more and more frustrated to Kotipelto’s singing and (lack of) frontmanship. I told him many times: “What’s wrong, that sounds awful…” He could not answer.

In studio when he joined the band, ‘4th Dimension’ was very hard to record, probably because he was a rookie and never been in studio before. ‘Episode’ was better. In that album his voice was the best than it has ever been. After that it started getting downhill. You have to remember that I produced and recorded his vocals to about 200 songs. The vocals of ‘Elements’ took over one month to record because every sentence had to be recorded separately. So I recorded about 2000 sentences over and over again. That does take time.

The worst thing was of course to try to record a live DVD or a live album. What do you do with the vocals? Everything else was always either good or excellent, but the voice was always lacking power, energy and was always out of tune. So sadly enough, we were pressured by the record company to do a live album that was recorded at Rodon Club. Those vocals are completely rerecorded in the studio.

Everybody remembers the power that show had. And yet, why to re-record the vocals? Because they had to be re-recorded. If somebody doesn’t believe me in this, there are bootlegs from that gig. Just compare the vocals of the album to the live gig and you immediately hear it.

In the same way we recorded two live gigs: Sao Paulo and Milan. I refused to do the same thing than on ‘Visions Of Europe’. The other guys would have done it. That decision cost us around 80,000 Euros.

But I just could not do it again. To re-record live vocals at Finnvox. You think Ronnie James Dio re-recorded his live performances? Or Kiske? No. They were even better live than in studio.

So one of the factors was actually the frustration of bad vocals. When I did my third solo album ‘Revolution Renaissance’ with Kiske and Sammet on the vocals, I felt so relieved because I did not have to struggle with the vocals. They were right there. It was easy as hell.

So these were somewhat the reasons I left. I felt I am not loved, wanted or needed anymore and that is a place where you would not want to be either. When I gave them the rights to the Stratovarius name I owned, (that I actually could still have back if I would want to legally), it was a protest when they decided to continue without me and Jari as Stratovarius. I also gave them the rights to every Strato album as a protest, even to albums like ‘Dreamspace’ or ‘Fright Night’ in which they were not even playing. So that has to be mentioned. It was a protest, not a gift.

And now today you can see what is happening. Joerg Michael left the band and two members are left. And what do they do: swear to continue. Not that I expected anything else but it is extremely lame to me and just shows the complete lack of dignity towards the long Legacy of Stratovarius that Tuomo Lassila and me started in 1984.

Rock Overdose: Looking back to your career, which album you will say that is your best work and which is your favorite song to play live?

Timo: It changes day to day but I think from Strato, I like ‘Elements Pt1’ the best and RR’s ‘Age Of Aquarius’ is really good album for me. I dont think people gave it the credit it deserves. It is an album that has good songs but yet you cannot really cathegorize it.

Thanks to Rock Overdose