Some may find it hard to believe but I wasn’t old enough to see Rick Wakeman live in his 70s peak doing his huge shows with orchestras and inflatable dinosaurs and dancers on ice. It was close but I wasn’t. 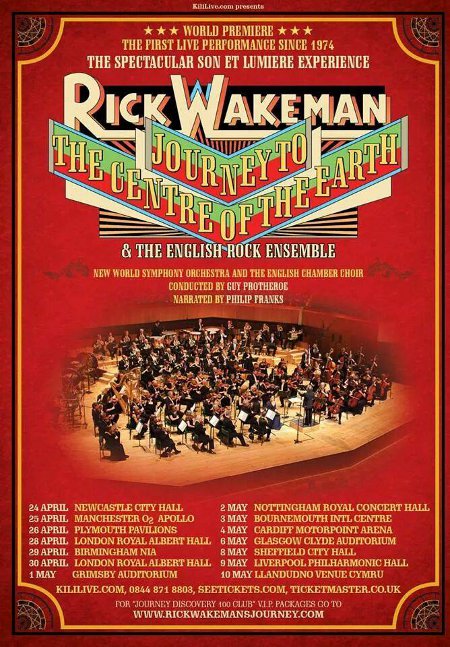 I was therefore very pleased to see that to celebrate the 40th anniversary of the original recording of his epic telling of Jules Verne’s ‘Journey To The Centre Of The Earth’ that he was doing a tour complete with orchestra and choir and made a date to be at Glasgow’s Clyde Auditorium (known locally as The Armadillo) to see him relive the glory years.

Mr Wakeman is most commonly seen on tour in the UK these days doing much smaller scale shows where he plays some highlights from his career and spends literally half the show telling stories about his years in music. He is a very funny storyteller and has some fantastic tales to tell so it’s always entertaining and tonight the first part of the show was in that mode.

Deciding to do some songs related to people who had encouraged him to do the ‘Journey’ project we got Cat Steven’s ‘Morning Has Broken’ with a choir and Bowie’s ‘Life On Mars’ with vocals from Hayley Sandersen who apparently can be heard singing with the band on Strictly Come Dancing. Both were excellent and maybe I should point out that the keyboards on the original versions of both those songs were played by tonight’s star.

Ashley Holt who sang on much of Wakeman’s solo work came out for a slightly bonkers version of ‘Summertime’, I’ve never heard it sung in such a formal sounding English accent before. The stories were fun too and this section ended with a version of The Beatles’ ‘Eleanor Rigby’ done in the style of Prokofiev which was really just an excuse for showing off some fearsome keyboard playing. 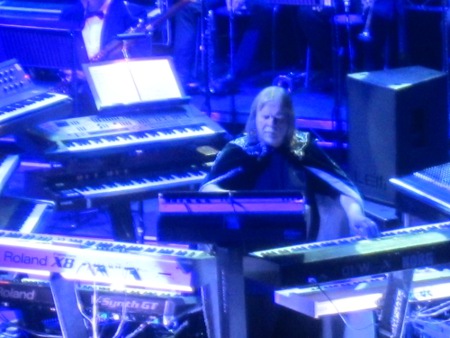 After an interval it was time for the full orchestra and choir to fill the stage and for Rick Wakeman to put on a glittery cape and take his place behind his bank of ten different keyboards. It’s 70s time.

For the next hour we were treated to an unquestionably pompous but ultimately really enjoyable collaboration between choir, orchestra and 70s style rock band. I haven’t played the album for some time and I’d forgotten how good and memorable much of the orchestration was in this piece of music. 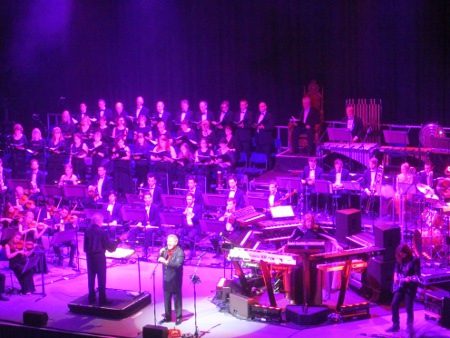 Matched with the funky and rocky styles coming from the rock band, some fine vocals from Messrs Holt and Sandersen and over it all some brilliant keyboard playing this was a really fun experience and something you won’t get much of now outside maybe a rerun of ‘Jesus Christ Superstar’. Having a narrator sitting on a throne high at the rear of the stage eloquently reading the story the music was there to illustrate did make the evening feel slightly surreal but not in a bad way if you know what I mean.

Having recently discovered much of the original score extra parts were added in to the music on the original vinyl limited album stretching the centrepiece of the evening out to an hour but no one minded or noticed the joins. The large crowd preset simply revelled in the unique and over the top yet graceful music and when it drew to an epic conclusion there was a standing ovation as everyone took their bows. 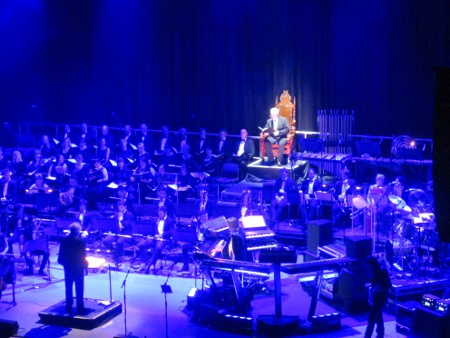 The crowd wouldn’t go home yet so out came everyone for an encore and the keyboard wizard himself explained that before the tour they hadn’t been sure what to do for an encore so had put together some stuff from sequel ‘Returrn To The Centre Of The Earth’ and merged it with a different version of the ending of ‘Journey’.

In practice this turned out to be a more relaxed, free flowing twenty minutes of music with the rock band funking it up and the orchestra getting to join in and let loose a bit. We even got a guitar/keyboard ‘battle’ rock dinosaur style with Mr Wakeman donning a mobile keyboard and battling it out with the band’s guitar player centre stage.

They eventually found their way back to the end of the story and it was surreal to hear the same narration and same final sections of ‘Journey’ so soon but eventually the evening ended on the same high as the main set. 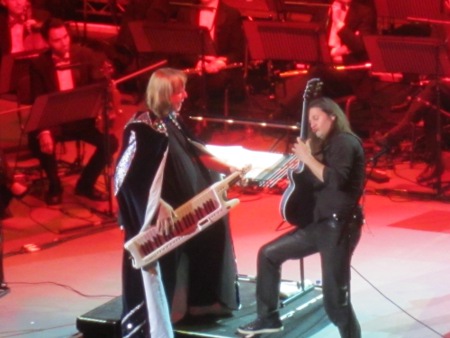 This was a thoroughly enjoyable trip back to a bygone age, pompous, themed, orchestral based music performed with grace and humour and huge amounts of talent. Rick Wakeman’s skills on a variety of keyboards show no sign of slowing down and neither does his sense of humour. Or his sens of the ridiculous. 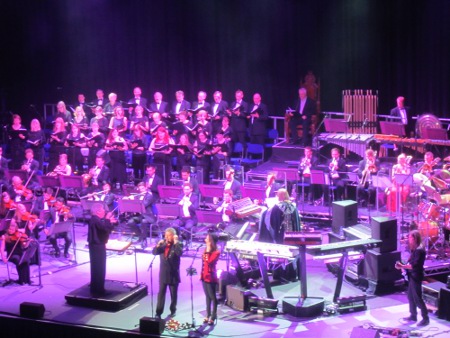