I’ve lost count of the amount of outdoor festivals I’ve attended over the years and although there has been some most memorable ones including the Knebworth Fayre 85, countless Monsters Of Rock fests at Castle Donington, the days when Reading rocked plus the numerous European jaunts I’ve been on including the mother of them all at Wacken in Germany, lest not forgetting the mighty Rock In Rio. 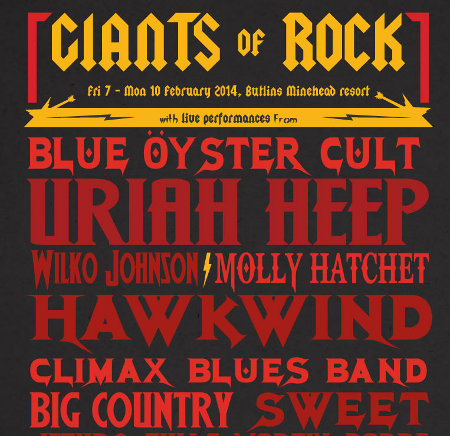 But in recent years it’s been a new kind of festival I’ve started to enjoy the most… the indoor festival.

When I say indoor festival, it’s the ones held at holiday camps that really shine. No need to worry about the rain or the muddy windswept sound or the three mile hike to get to the next stage in time to see your favourite band. This love affair started with the Hard Rock Hell events that have mushroomed in the past few years. These gave me a taste to attend the Rock and Blues Festival at Butlins Skegness. It was then that I realised that Butlins really have raised the bar and have shook off that saucy postcard Carry On image of bygone years.

What I’ve experienced at Skegness, the same can be said for the Butlins site of Minehead. Luxury rooms, top quality food and more importantly for music lovers is that the sound produced is of the most pristine crystal clear clarity you will ever hear at any music venue around the country from which every band benefits highly from performing here.

The inaugural Giants Of Rock Festival had a stellar mouth watering line up to please all devotes of classic rock. After driving up from London, a wee tipple was in order before the evening meal. A perfect way to start any festival. 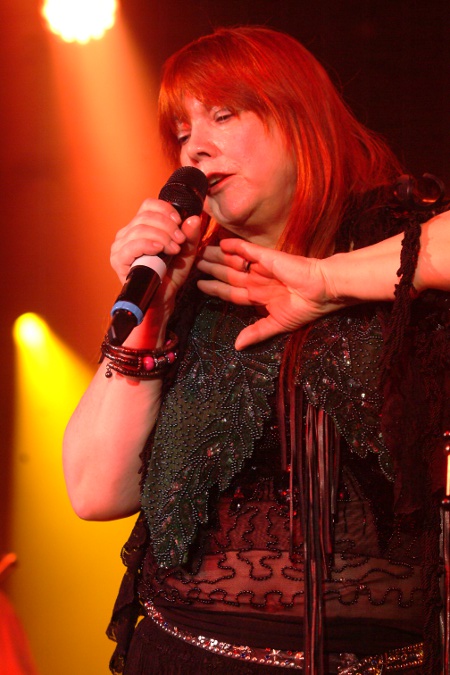 Friday night started off with a whimper rather than a headbang. Curved Air put to rights their below par appearance the previous year at Skeggy with a thoughtful intricate set of progressive folk delights that required the punter to listen with intent. Sonja Kristina and her band could hold their heads high with a noble display of soothing subtlety. 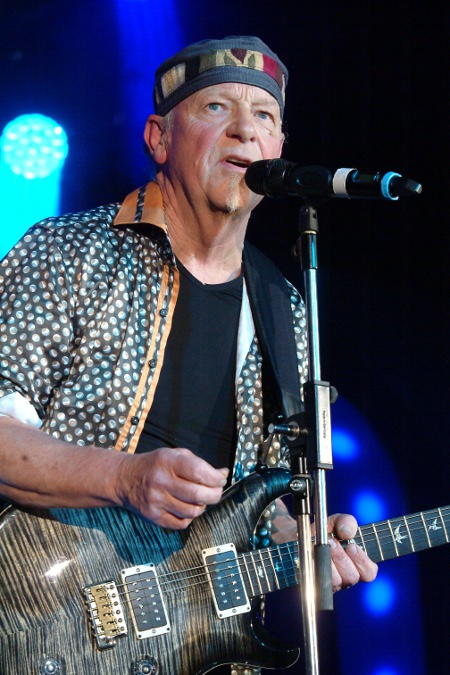 Minus a flute player, Jethro Tull’s Martin Barre had more room to musically manoeuvre in a more bluesy direction and pleased with heavier versions of ‘Minstrel In The Gallery, ‘A Song For Jeffery’ and a stomping ‘Locomotive Breath’ but surprised many with his unique rendition of Gov’t Mule’s ‘Thorazine Shuffle’. On this showing, Barre will be in no hurry to call up Mr Anderson for his next assignment. 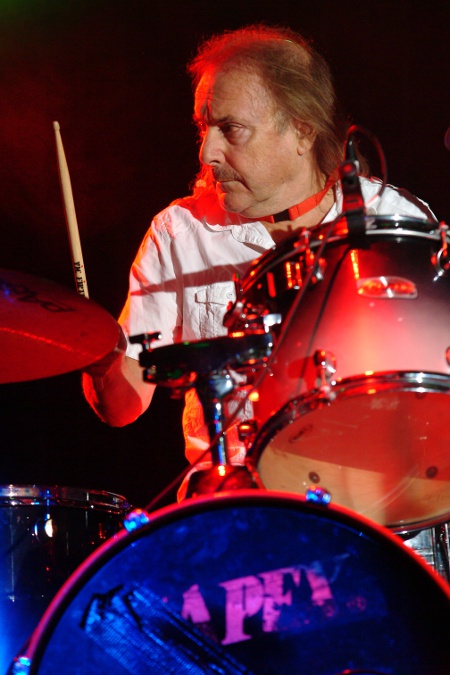 I really wanted to enjoy John Coghlan’s Quo but after witnessing him with the classic Frantic Four line up last year at Hammersmith this was a bit like going back to Benidorm after you’ve just had the vacation of your life in the Maldives. Once you’ve ordered off the a la carte menu, the plate of ham, egg and chips dosn’t quite taste the same. Even my beer was starting to go flat.

So Friday evening ended with a little party back at our room in a quest to demolish the bottle of Jack Daniels before the serious business that lay ahead on the Saturday. 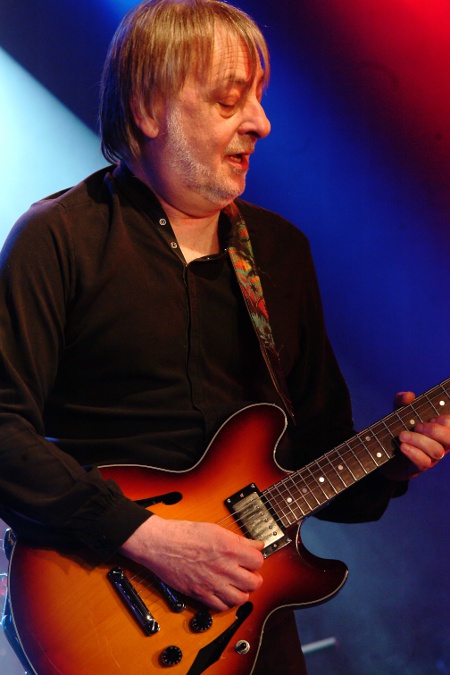 One time Steeley Dan session man Elliott Randall and his band played some delightful jazzy blues with Randall clearly enjoying himself. Ending the show with ‘Reelin’ In The Years’ with a guitar solo just like it was on the goddam record brought beaming elated smiles across every grown man in the room. The finest moment of the entire weekend.

2.15pm was the scheduled time for Southern rockers Molly Hatchet as we got ourselves into a decent viewing position and waited patiently. That patience soon wore thin when the DJ and was handed a note explaining that the next band will be Iron Horses and Molly Hatchet will then immediately follow… “Simples”, he told a quizzical crowd… Iron Fooking Who?…

It seems that not only were Molly Hatchet totally unaware as to the reason why they were here, thinking they were doing an evening show, but they brought along their uninvited support act from the Euro tour and insisted they the Germans got a slot on the bill! Fair enough some may think, but in all honesty Iron Horses were one of the worst bands I’ve ever seen in my life, full of every metal cliche ever invented.

I was looking around for the TV crew thinking this was some kind of spoof band. Total shite and totally out of context with the rest of the bands on the bill. Molly Hatchet then flirted with disaster by only doing a forty minute set. Their only saving grace was that what we got was very good, but when singer Phil McCormack yelled: “Let’s hear a Hell-Yeah for Iron Horses”, a “Hell-No” was the muted reply. 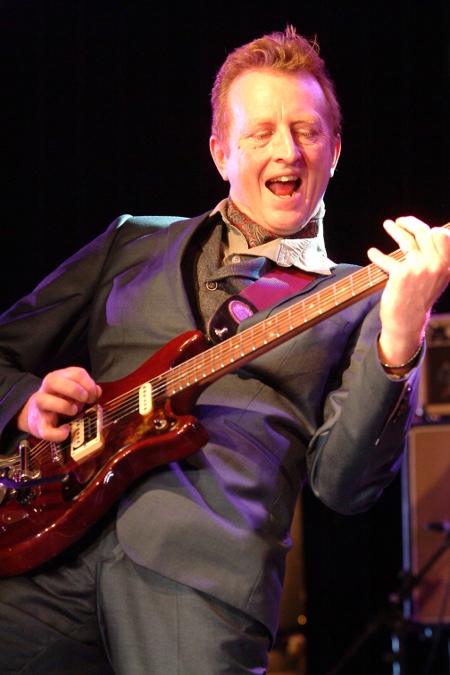 Big Country were the black sheep of the festival but were a refreshing joy with an arsenal of celtic flavoured big hits including ‘Chance’, ‘Look Away’ and the beer raising ‘Fields Of Fire’. The new material neatly fitted in too. A success for the Scots. 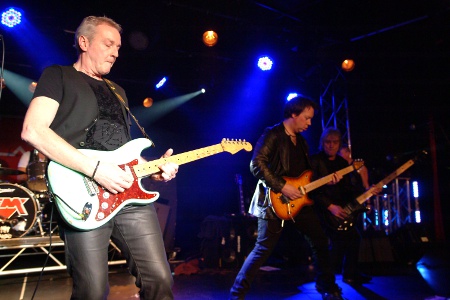 Melodic rockers FM played a highly polished set full of feel-good clean radio friendly hits that should’ve been. Now in their 30th year, the band still sound so fresh and young. They’ve moved on in the fashion stakes from their 80s heyday of full blown mullets and padded shoulder jackets but thankfully there is no need to pad out their set. Every song is a instant winner. 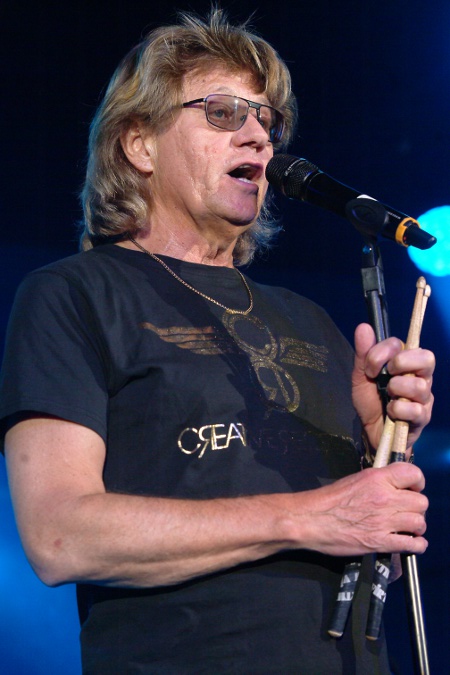 Bev Bevan and band ignored his ELO past but fondly remembered his early roots with the Move’s ‘Fire Brigade’ and paid homage to his short tenure in Black Sabbath with ‘Paranoid’. 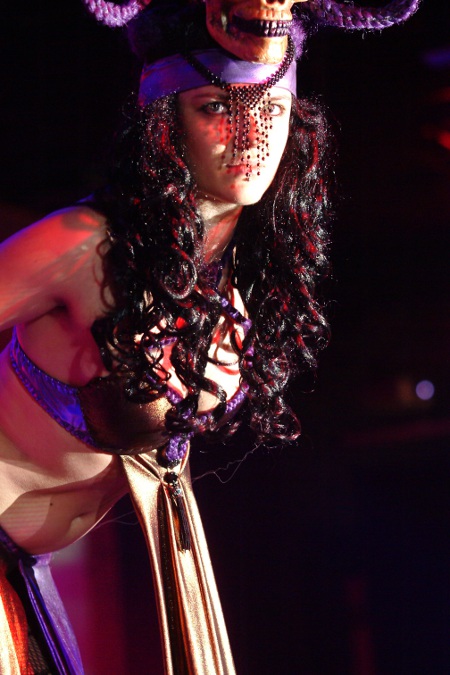 Hawkwind played a set that was both captivating on the eyes and ears. A visual sonic attack with a psychedelic light show and magical manoeuvres from their two mesmerizing girl dancers. The Santana cement mix ride of ‘Steppenwolf’, the epic trance of ‘Orgone Accumulator’ and the reefer madness of ‘Hassan I Sahba’ earned Hawkwind a well deserved encore of ‘Brainstorm’ before riding out high on a ‘Silver Machine’. 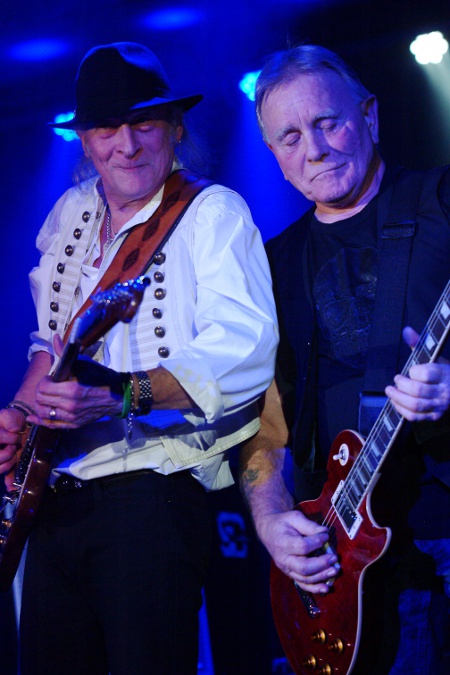 For fans of Stray, it indeed proved to be a very special show as one time member Pete Dyer played for the entire set on guitar and rarely heard chestnuts such as ‘Percy The Pimp’ and ‘One Night In Texas’ were highly refreshing, as was the beer at this point of the night.

As well as the regular Stray numbers Del Bromham played a few choice cuts from his recent solo album, ‘Nine Yards’, with invited guest singer, the wonderfully named Cherry Lee Mewis who added her honey voice to the tipsy ‘What Goes Around’ and the ‘Ballad of JD’. With Bromham adding guitar heroics to ‘All In Your Mind’ this was one unforgettable set. 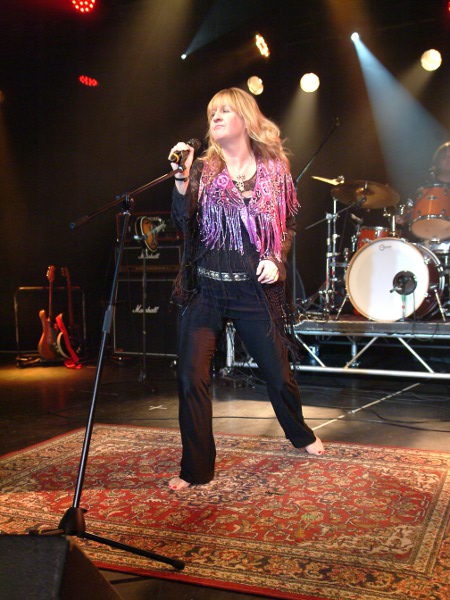 It was down to the Deborah Bonham Band to cure the hangovers on Sunday morning. The barefooted Deborah puts her heart and soul into her performance playing songs from her new album ‘Spirit’ that strike a chord with the early revelers. A dedication to her brother John Bonham with Led Zep’s ‘Rock ‘N Roll’ ended an emotional set. 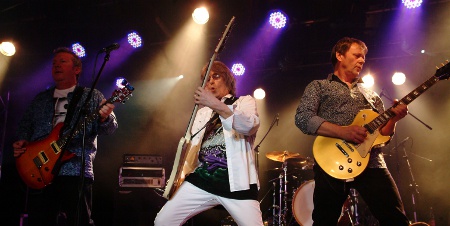 Martin Turner’s Wishbone Ash (Or Martin Turner Plays The Music Of Wishbone Ash as they now legally known as) followed with a clinical set full of sublime delights. ‘King Will Come’ and ‘Phoenix’ featured the the twin guitar work of Danny Willson and Ray Hatfield who bring a renewed freshness to the sound of these timeless classics. Martin Turner was in good humour, as ever, dedicating ‘Warrior’ to the football fans up and down the country. A classy set. 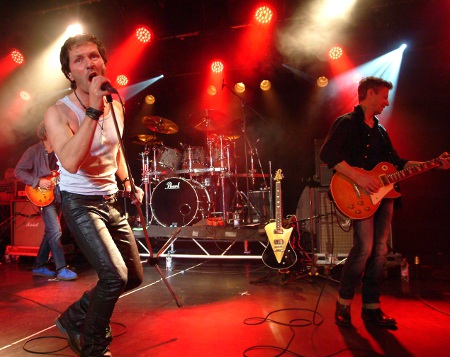 Another band that has risen from the ashes, and even feature a former Wishbone Ash member in Laurie Wisefield, along with former Whitesnake commandos Micky Moody and Neil Murray were Snakecharmer. A set divided by former Whitesnake glories and tracks from their eponymous debut in which the band showed a lot of confidence in playing tracks such as ‘Guilty As Charged’, ‘Accident Prone’ and the the delicate ‘Fallen Leaves’ neatly sat side by side with the stadium rockers of ‘Slow an’ Easy’, ‘Here I Go Again’ and the chest beating ‘Fool For Your Loving’. A success. 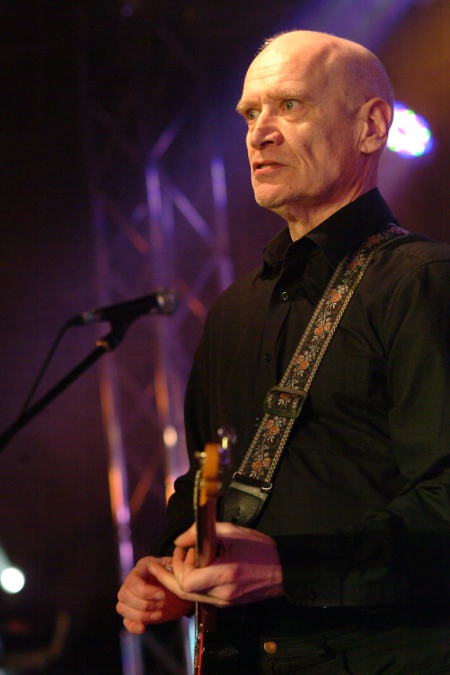 For a man who has the grim reaper knocking on his door Wilko Johnson seems to be in no hurry to answer it. A riveting set from the Canvey Island lad full of his trade mark riffs and zany swagger complimented by Blockhead Norman Watt-Roy on the bass. Proving that simplicity works best with ‘Down By The Jetty’, ‘The More I Give’ and ‘Roxette’, this was textbook R&B at it’s best.

After stuffing my belly full of a delicious Sunday roast it was Sweet who supplied the dessert. The cream was poured on heavily by Andy Scott and his men with a set list that read like the greatest hits of the seventies. What really pleased the hardened rockers here was the inclusion of the rifftastic ‘Set Me Free’ from ‘Sweet… Fanny Adams’ that certainly put a broad smile on all of the connoisseur rockers faces.

The real coup of the festival was the booking of the Blue Oyster Cult who hadn’t visited these shores in over seven years and what was even more remarkable was that Minehead was their only UK date on this short European visit. Eric Bloom and a dapper looking Buck Dharma remain from the original line-up, bolstered by the inclusion of the well travelled bassist Kasim Sulton, best known for his time with Utopia, Meat Loaf’s ‘Bat Out Of Hell’ album and with Joan Jett & the Blackhearts.

Opening with the punk saliva of ‘This Ain’t The Summer Of Love’, this was most certainly the winter of love as the adulation poured out for the band with beer glasses raised high for ‘The Golden Age Of Leather’. The AOR smoothness of ‘Burnin’ For You’ and ‘Dancin’ In The Ruins’ followed with further wise choices in ‘OD’d On Life Itself’,’Harvest Moon’ and ‘The Vigil’ representing their entire career. ‘Then Came The Last Days Of May’ featured a stunning guitar workout from Dharma’. ‘Godzilla’ and ‘(Don’t Fear) The Reaper’ ended a truly magical set. 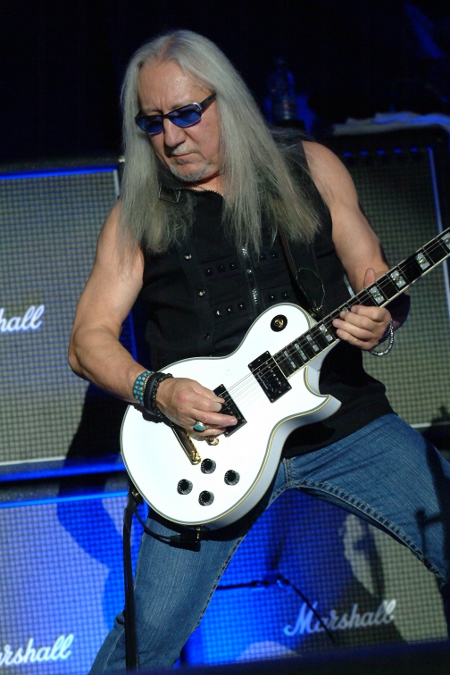 Uriah Heep put in a high ‘n mighty display with the latter day material taking up the main percentage on the first half of the set with ‘Overload’, ‘Between Two Worlds’ and ‘Into The Wild’ proving that the Heep can still deliver. Bernie Shaw is a confident frontman engaging with the crowd, Russell Gilbrook is a formidable drummer who knocks the hell out of ‘Look At Yourself’ with Mick Box taking the song into an orgasmic frenzy.

The acoustic flair of ‘Lady In Black’ is the perfect song to sing along too at this drunken hour of the night and the ladies are invited up onto the stage for the encore of ‘Free ‘N Easy’ for a jolly headbang. Happy days! 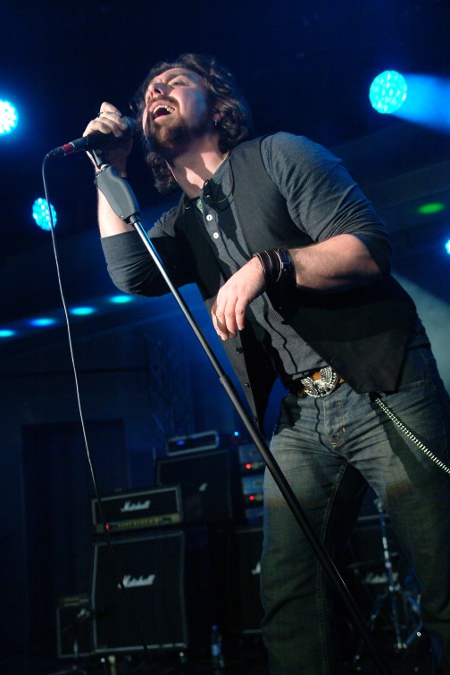 At 1.00am it’s was left to rising rockers The Screaming Eagles to round off the event. Unfortunately I didn’t catch them but my trusted lens man Noel Buckley loved them. I was busy demolishing off Uriah Heep’s rider in their dressing room along with numerous other band members and journalists who shall remain nameless, but shameful mistaken identities and strong cocktails were the order of a very long night. All guilty parties will be held to ransom at a later date.

A terrific weekend away and you’ll be a fool to miss next year’s event. No wonder Butlins call it the ‘Big Weekends’. They don’t get much bigger than this.