Welcome to the world of Tad Morose, an interesting and evolving progressive Metal outfit from the climates of Sweden. 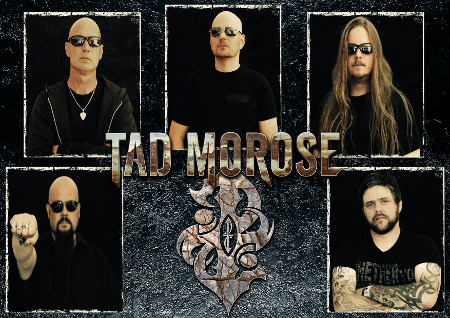 Their debut album rocked the ground we stood on and went by the title of ‘Leaving The Past Behind’. To think that was many years ago back in 1993, and after releasing another six studio albums and a compilation collection, they’re back to break the silence with their latest album!

Going under the name of ‘Revenant’, there are many points to be acknowledged and many aspects are different. This shouldn’t come as any surprise when you realise their last studio release was ‘Modus Vivendi’ in 2003. After ten long years, a lot of Scandinavian water has gone under the bridge since that output. If evidence was needed check out the uncompromising cover artwork for the latest album ‘Revenant’, or the first music video for the song ‘Beneath A Veil Of Crying Souls’.

When speaking to the longest serving and founding member of Tad Morose, Christer ‘Krunt’ Andersson, I dived straight in and quizzed him on why this album had taken so long and whether it was connected to a sort of anniversary celebration? “No actually, this might sound very strange, but we haven’t released an album in ten years, but not because we put the band down and went off to do something else, we kept at it all the time.

“But due to various line-up changes; life in general, I mean I’ve got two kids and a house to do in this period, yes just life in general and all weird stuff happening to all of us in the band during all those years just made it take ten years to get this album done.” Full of energy and carrying his evident Swedish accent as he smiled and spoke to me, it was obvious that there was no sinister reason behind the length this album took to finish.

“Usually a band gets to put down the band do some solo career and do the reunion in less than ten years, but we just tried to get the album done in ten years so, I don’t know, perhaps this album just wasn’t meant to be released earlier or something?” Andersson chuckles as he reflects over the vast duration it has taken.

Due to the length it’s taken to record ‘Revenant’, I wondered how representative it was of Tad Morose. “Some of the songs on the album are pretty old actually, and some parts of the songs are very old and whatever, some songs are pretty fresh. I think the entire album kind of reflects us here and now and during the past ten years with everything we’re in to over those years I guess, so I mean this is Tad Morose here and now.”

There’s no disputing his enthusiasm as he gets in the groove and shares his thoughts regarding the new album and in particular the striking cover artwork. When I looked up the literal meaning of ‘Revenant’ I was intrigued to read that it meant a ghost that returns, yet when you look at the cover of this new album you’re confronted with a skeletal figure wading through fire and all manner of swirling flames and a red hot environment! 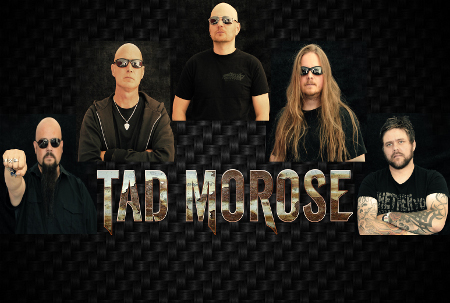 “In the end everything gets kind of rushed, I mean all of a sudden we had a record deal and of course we had a deadline and the album wasn’t really complete so we had to rush it a little bit in the end anyway. We were just sitting around and kind of like start talking; right guys, I guess we’ll need an album cover as well.”

You can imagine the conversation as things came together and the pressure was on the band to deliver in all departments. An artist from Norway was willing to do the cover artwork, but the band weren’t sure what direction to take. “We just looked at each other and somebody said well it’s a heavy metal album so how about a skull or something? And we just pitched ideas back and forth within five minutes or something, and we just came up with an idea of a skull coming out of the water.”

The artist made up three or four versions and the final piece of work came from the designer and not the band. “The title is ‘Revenant’ we’ve been away from releasing an album for over ten years so we really needed something striking, kind of like ‘ha-ha we’re back to haunt you yet again’ or something, so was that kind of vibe of the title and the artwork. It really turned out pretty, pretty nice.

“And if you look pretty closely to the album cover you can find a lot of weird stuff hidden everywhere in the cover, kind of like the old Iron Maiden artwork where you could just sit and watch it and discover new things all the time. It’s easier on a vinyl cover except this is a small CD cover, but if you look carefully I guess you could see it on there as well.”

Noting how the line-up of Tad Morose had changed significantly, I probed a little further about what had taken place. “It was kind of like; we were building up quite a good momentum from the ‘Undead’ album, ‘The Matters Of The Dark’ and then ‘Modus Vivendi’, but during all of those years our former singer Urban Breed had, he’s always been kind of an oddball so to say, but that’s totally fine.

“But throughout the years he started to behave a bit more weird for every year so to say, distancing himself from the rest of us and it came to the point where it was just not possible to work with him any longer. This came really to the point about two weeks before we were to enter the studio to record the follow up to ‘Modus Vivendi’, I think it was back in 2005. And it was just kind of like we had to cancel the recording and everything, and that put us in a real strange situation with our record company and the booked studio and everything.

“So we totally came to an unexpected halt back then, so that really put us off so to say for six months or something before we picked up the pieces and kind of like sat down and tried to make decisions on what we wanted to do.”

Andersson had slowed down his pace and sounded a little reflective and sombre too, as he recollected the sore memories of a band that had gradually dissolved before his own eyes. His explanation of the domino effect within the line-up continued as he shared how members left the band due to losing faith in what they were doing, or had to relocate or had other work-related distractions which prevented an appropriate commitment to Tad Morose.

To close the book on this constantly challenging sequence of events, Andersson confirmed how the recording of ‘Revenant’ was easily the toughest album that the band had recorded since their 1993 debut.

Andersson explained that this new album represented both a continuation of their back catalogue and their legacy, but was also a second chapter as three members out of the five are new and bringing their own personality to the music.

Since discovering Ace Frehley and Kiss back in the day, he was blown away and wanted to be like Frehley on stage with the extravagant stage show all around him. In his warm Swedish accent, Andersson with a smile told me that he loves heavy metal even today after all these years. “For me Tad Morose is a brutally honest heavy metal band and all the band members are totally devoted heavy metal fans. We’re good friends with each other and we do this just for the pure fun of this, yes, we’re an honest heavy metal band. There’s no bullshit.”

His sincerity and enthusiasm were evident throughout our conversation and his passion spoke volumes when confronted with the past ten long years of constant challenges and the efforts in trying to finish off what was supposed to be another studio album. Against many odds, he can sit there and feel not only relief, but a wonderful sense of achievement that ‘Revenant’ has indeed been completed, and that he now has a band of committed individuals around him to take this Progressive Metal monster on the road.

It seems that he is right, Tad Morose are a straight forward band of enthusiastic heavy metal musicians who wear their honesty on their sleeves, and just want to play the music to the best of their abilities. This ghost has indeed returned to reap new experiences and rewards, so beware when attending a festival where these guys are playing.