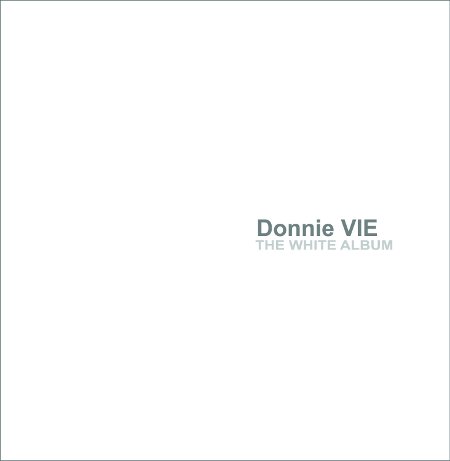 I recently had the joy and intrigue of speaking to Chip Z’Nuff for another online publication and he continues to speak highly and candidly about his musical brother Donnie Vie.

At the present time Enuff Z’Nuff tour still and get out to their audiences playing shows but without Vie at the helm. He’s been replaced most admirably by another fine talent in the form of Johnny Monaco. This situation only applies to live responsibilities as Vie remains firm favourite for studio-related activities.

On this weighty double album we find the singer/song-writer in his comfortable studio surroundings with the exception of one song – a cover version of the Chicago (is this more than irony considering Enuff Z’Nuff is a celebrated Chicago-based rock outfit?) standard ’25 Or 6 To 4′. The first eleven tracks make up the first album and showcase the various well-trodden musical paths Vie has travelled in the past.

Inspired by the sheer presence of ‘The White Album’ released in 1968 by the legendary The Beatles, Vie pays homage by giving this latest solo studio outing the title but very little else. Perhaps the main unique aspect of this set of songs is that it is a double album which is testimony to the singer’s creative prowess and wealth of material.

It is a principle which shouldn’t be ignored either when recognising the quantity of music on this album. After all, we know how Billy Joe Armstrong (Green Day) suffered with exhaustion in the aftermath of recording and writing three albums worth of material!

Album-opener ‘I Wanna Do It To You’ hits the listener with full frontal funk and is a breath of fresh air. Highly enjoyable the music drifts into more familiar territories associated with the singer with perhaps a sense of ‘Seven’ era Enuff Z’Nuff in the ethos, as ‘Handy Dandy’ and ‘For Your Pleasure’ lull the ears into a full sense of security. The rock ingredients are cranked up a little on ‘Happy Days’ and ‘Crash And Burn’ although the latter of these two grates for some reason.

The equilibrium is thankfully restored to top quality with ‘Light Shine On’, ‘Better Love Next Time’ and the piano-based ‘My Love’. All soaked in melody and emotion, these three moments really do provide confirmation if any were needed that Vie is a remarkable talent.

The palette continues to share different shades and textures like the almost fairground-looping instrumentation on ‘When Will You Love Me Again’, the Americana/folk vibes invested in ‘You’re My Favourite Thing To Do’ and the prominence of keys which accompany Vie’s cover version of John Lennon’s ‘Imagine’.

Listen out for a name-check of his band (Enuff Z’Nuff) during ‘Big Brother’ which is cute, although the song lurches within the instrumentation embracing very little grace in places. Thankfully ‘The White Album’ isn’t one of those quantity over quality situations as songs like album-closer ‘Angel Eyes [Outtake]’ is fluffy within its acoustic framework, ‘Without You [Outtake]’ dabbles with some brass and is astonishing considering it’s also considered an ‘outtake’; and longest track ‘Unforsaken’ closes album number one with an ambience for the epic.

I’m not sure if by the time the album is made available for customers to purchase, whether the track-list will be restored correctly for the second album. When it arrived at my end for review purposes it was incorrect and highly confusing at first. Be aware if this hasn’t be rectified.

To summarise, don’t make comparisons with The Beatles version of ‘The White Album’ as the only thing this and that have in common is the name. The quality of song-writing is impressive as always with Donnie Vie letting his talents loose, and despite a few below par musical adventures, it’s not at all bad. Allow for such a wealth of material to grow naturally and you’ll reap the rewards.

It would be safe to say that if this album was condensed to a single disc it would have been a true feat of quality, but how many times have people said such things eh?