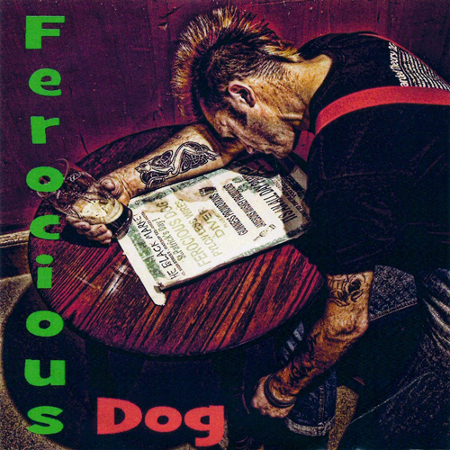 Do you like to drink, listen to a band and perhaps jig about like a loon? Well here we have the perfect accompaniment for your delectation. Very much along the same lines as Dropkick Murphys, Ferocious Dog do to Celtic folk what The Georgia Satellites did to country; a sound that is probably best described as dissident folk.

Despite the above eclecticism Ferocious Dog sound like just another bunch of crazy drunken Micks with a bag full of wild jigs and tall tales from the Emerald Isle but in fact, the band has grown from strength to strength even playing Dubai’s fabled St Patrick’s Day celebrations in 2011.

Ferocious Dog takes the traditional instruments of Celtic folk; fiddles, whistles, mandolins etc… and mixes them in a bucket of pissed up, fuck you, raw, buzz saw rock n’ roll attitude. If you like your folk but have grown weary of Mumford’s and friends’ trendy bittersweet whimsy Ferocious Dog may well prove a most satisfying diversion. I suspect even the most evangelical of rockers will find this sort of bustling take on traditional Celt hard to resist.

‘Hell Hounds’ gives the album a frantic start from which the pace rarely flags. There are some fine atmospherics too and the arrangements capture the cliché of the Irish outlaw romances, illustrated perfectly on ‘Too Late’, ‘Lyla’ and ‘Quiet Paddy’.

It is a visceral romp through Pogues territory kicking at anything and everything that has the misfortune to get in its way. There is, however, the occasional let up, ‘Mairi’s Wedding’ and ‘Freedom John’ for instance with their subtle ska undertones and the more traditional lament of ‘Criminal Justice’.

‘Ferocious Dog’ is an album that has an edge on many of its contemporaries because it has not been afraid to dig around in more traditional corners that offer a greater depth to what they do, in turn enhancing the rawness of the music. In fact, there is something here that takes the album close to the work Springsteen did a few years ago on his primal Seeger Sessions albums.

You might need to be in the right mood for ‘Ferocious Dog’ but as a soundtrack to getting absolutely wankered and having a blast, this album will prove exceptional. Not bad for a band from Warsop, Nottinghamshire, eh?