When Mike Portnoy announced he was leaving Dream Theater back in 2010, I kind of figured one of his many (many) side projects would have taken a full blown life of its own. I half expected him to do another Liquid Tension Experiment album, maybe reform Transatlantic or possibly even do another solo album. 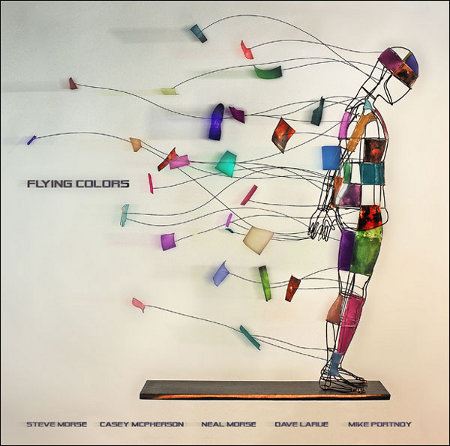 What he did instead was very surprising and in equal measure, worrying. He formed not one, but two different side projects. First to release was the chunky, groove laden Adrenaline Mob with their debut album ‘Omerta’ (a review of which will be coming soon) and shortly after was today’s subject matter, the prog-tastic Flying Colors with their eponymous debut album.

The quality of the line-up is instantly noticeable as soon as the sparse intro kicks into ‘Blue Ocean’ and everyone gets their little moment to make themselves heard before McPherson’s cool, smooth vocals kick in. If you haven’t heard Alpha Rev, then you’re missing out on some quality prog, but you won’t have heard how good a singer he is. His range is wide; he can cover some really difficult runs with his voice all the while making it sound genuinely effortless. The chorus for ‘Blue Ocean’ is genuinely beautiful, with some wonderfully descriptive lyrics, glorious backing vocals (provided by the rest of the band) and a tone which just lifts my spirits every time I hear it.

To get an idea on his range, McPherson changes entirely for the decidedly dirty ‘Shoulda Woulda Coulda’. A track that sounds halfway between Velvet Revolver and Iron Butterfly, he puts on a more desperate, intimidating tone, all the while building and building the song up and hitting some very high notes. This is all framed by one of the dirtiest riffs you’re likely to hear all year and a groove that inspires enough head bobbing to cause whiplash.

Morse’s guitar work is, as you would expect, absolutely phenomenal throughout. The aforementioned ‘Shoulda Woulda Coulda’ is just pure groove, but this being a prog band, nothing stays the same song to song. ‘The Storm’ sees Morse take a more gentle approach to a sensitive ballad, mixing acoustic passages with distorted chords in the chorus and an epic emotion tinged solo that could get even the sternest death Metal guys to shed a little tear.

We really get to see what Morse can do on what has to be the heaviest song of the whole album, ‘All Falls Down’. There’s shredding a plenty, chunky half time riffing and lots of little lead embellishments which Morse is a consummate pro at. You can clearly hear that this is where Morse has been given licence to go nuts. It’s not self-indulgent, it’s not inappropriate, but it’s intricate, unique and sounds like it’s an absolute blast for him to play.

The other Morse in the band, Neal, should not be overlooked though. If you’ve heard Spock’s Beard, you already know how good he is behind a keyboard, but he really get’s to excel himself with Flying Colors. The variance in style between each song gives him warrant to get as many different textures into the mix as possible. That said, when talking about the keys, I will always gravitate to the wonderfully cheesy, Beatles-esque ‘Love Is What I’m Waiting For’, which is built around Neal’s staccato piano part. It’s massively different from the rest of the album but it flows brilliantly.

Elsewhere, Neal adds different chords and textures to the tracks to increase their overall tone and impact. The chorus of ‘Blue Ocean’ has a subtle organ and string pad in the background which adds that extra level to the song, making it sound not necessarily bigger, but more complete. The same applies to Kayla, he fills out the soundscape, definitely present in the background but never intruding until the last chorus where he adds some extra strings to crescendo the whole thing. And then of course, ‘All Falls Down’ he gets the grand organ sound out to give that warbling background all the best rock bands need occasionally. What impresses me the most about Neal’s playing though is that in a band of such phenomenal musicians, he (along with the rest of the band) is humble enough not to feel the need to try and steal the limelight and force his playing to the front of the mix.

Now this is prog, not Metal, there is room here for bass frequencies and bass players are welcome to be intricate and complex rather than be consigned to the relative obscurity of root note chugging. ‘Take All Fall Down’ (yes, yes, it’s clearly my favourite song on the album) where LaRue gets to indulge himself in a walking bass line behind Morse’s frantic riffing. It adds an odd rhythmic dynamic to the song, but at the same time it really does work and it’s very entertaining. You can hear LaRue pretty constantly throughout the whole album.

One of my favourite moments for him is in the intro of ‘Forever In A Daze’ where he plays this half lumbering, half funky slap and pop riff behind the more ambient guitar work which comprises the intro and verse. Then there’s the funky bass solo in the middle of the song. I love it.

Now to the drums. Well, it’s Mike Portnoy, do I really need to elaborate? Oh, ok, I guess I have to, don’t I?

As you would expect from the man who kept Dream Theater in polyrhythms for 25 years, the drumming is phenomenal. With Flying Colors not being a Metal band, there’s not as much demand for his lightning fast beats and fills, nor any real call for a lot of double kick work, but it’s Portnoy at the end of the day, you know it’s going to be good.

In the context of FC, he remains subtle when he needs to (such as ‘Love Is What I’m Waiting For’) and he knows when to get louder and a touch more intricate (like in ‘All Fall Down’ and ‘Forever In A Daze’). There’s the standard time signature jumps, tempo and dynamic changes throughout the album and as usual, Portnoy is superb keeping everything going exactly as it should.

Flying Colors is an amazing album. This is progressive rock at its best. This is by no means the most intricate, nor the heaviest prog album I’ve ever heard, but it is an example of how good progressive music can be when the band strip back the pretension, ego and showing off and simply concentrate on writing a collection of excellent songs.

The production is slick, the songs are well written, amazingly performed and well considered. This album is full of catchy melodies and interesting music and is well worth anybody’s money. I implore you to experience this, what I would consider to be the definition of a ‘super group’.

Previous articleIRON MAIDEN KICK OFF ‘MAIDEN ENGLAND’ TOUR 2012
Next articleIQ, TOUCHSTONE, PALLAS AND MORE ALL SET TO HEADLINE WHO’S WHO OF PROG FESTIVAL