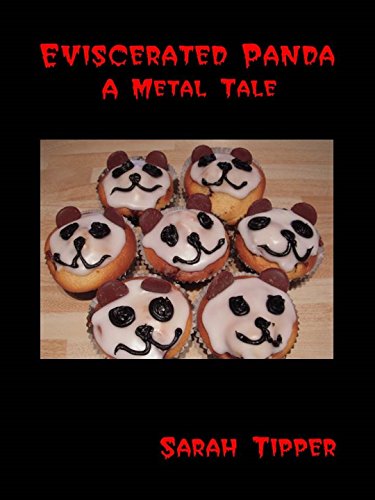 It’s not often that we here at MetalTalk Towers get books sent to us for review, so you can imagine our surprise and delight when this book, telling the tale of fictional band Eviscerated Panda, landed on our doormat.

This is author Sarah Tipper’s first book, and what a fantastic book it is. It tells the story of a newly formed thrash band from Reading called Eviscerated Panda (what a fantastic name for a band, isn’t it?) which consists of vocalist Nick (who could have had a sensible career before he chose the rock band path), Ian (the rhythm guitarist who also looks after the band’s website), Paul (general handyman by day and drummer cum band van driver by night), Jim (archetypal quiet and unassuming bass player) and founder of the band, Phil Winter (the lead guitarist who thinks his phenomenal skill on the guitar matches his phenomenal ability with the ladies).

The story tells the story of the band including all the trials and tribulations of life while at the same time being in a band who are trying to make it into the big time – love, hate, lust and loss are mixed in with the tales of good and bad gigs and promoters are all served up here with a smattering of comedy to bind the whole tale together.

The thing that struck me is how familiar some of the characters and situations are. We all know someone who is a Nick, a Paul or a Phil, most of us regularly frequent a rock pub like The Green Man (where the band meet up for pre-gig meetings and post-gig post-mortems) or a rock nightclub like The Edge Bar and it’s this familiarity which helps the story along.

The story follows the band from their first hesitant gig at The Edge Bar in Reading through the highs and lows of trying to get noticed, play gigs and get a record deal whilst at the same time, keeping their social lives with their FWAGS (friends, wives and girlfriends in the shape of best friends Cleo and Jenni, Jim’s girlfriend Suzy and Paul’s wife Angie) in some kind of order.

Tipper’s writing style is very descriptive with a fair amount of real band names (from AC/DC to Wolfsbane with Bolt Thrower, Judas Priest, Slayer and Megadeth thrown into the mix along the way) there to give it some context, although I’m not sure if these are personal favourites of the authors or just the best bands to fit the text.

Tipper writes with an evident passion and knowledge of Metal music but I can’t help but wonder which (if any) of the characters are actually based on her?

If you’re looking for a good holiday read, or are simply looking for a quality read to while away a few hours, then this title is highly recommended and I’m looking forward to not only a further volume detailing the continuing fortunes of Eviscerated Panda but I would also like to see an expanded version of (the hilarious) ‘A Girl’s Guide To Metal’ by Cleo Howard.