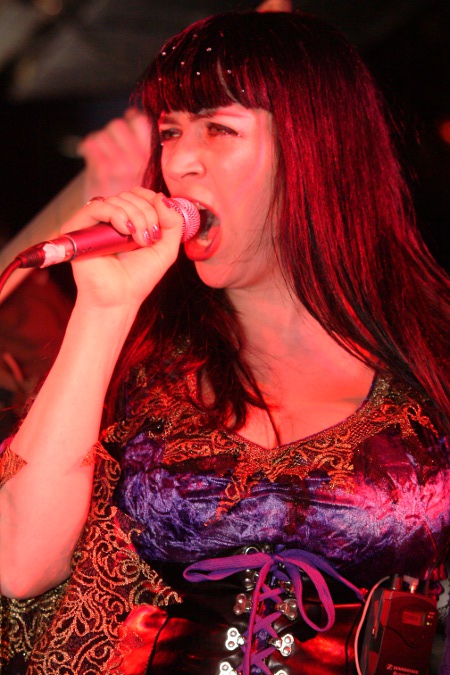 The two best female fronted current British Metal bands went head to head in London for a true display of Girl Power. The real kind and not the purile, brainless poppy bilge that will not be mentioned on this site.

Mortad’s lead singer Somi Arian is actually Iranian but she is permanently resident in London now and did class the band as “from London” from the Borderline stage tonight so I’m marking them down as British for the sake of the above paragraph.

There was real, true talent on display tonight but it won’t get a single line in the glossies or the cheap, tatty popular magazines because it’s music that requires a little bit of thought and effort on the part of the listener, something that the braindead fans of today’s airbrushed popsters who command all the fame and headlines by rising on the coat-tails of stupidity and banality are incapable of doing.

It’s a sad, sad fact of life that bullshit records by airhead bilge merchants like Britney Spears and Cheryl Cole can command millions of listeners and sales whilst proper talent like that on display at The Borderline tonight goes, relatively speaking, unnoticed.

But this is a discussion that has been had a million times over. It was exactly the same when Warlock, Rock Goddess, Zed Yago and Girlschool brought out their first releases in the 80s (I know because I was there!) and it will probably never change.

But that makes what these two very special acts are doing even more impressive as they’ve worked – and are still working – their way up the ladder the hard way and any success they get will have been earned the right way and not ‘manufactured’.

Yes, both bands deserve a much bigger audience and that is surely (hopefully?) going to come because what you have here is real belief in what they purvey, which is a high level of intelligent music designed to garner emotions and encourage radical thought and free speech and give you faith that within today’s musical arts, there exists some who will stand up for what they believe is truly the right way and not just jump on the first Cowell owned bandwagon that rolls into town. 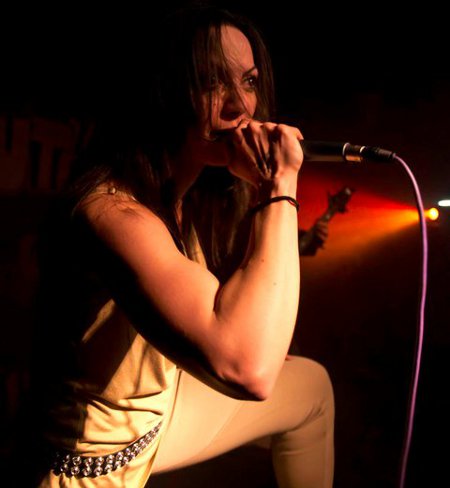 Both bands are quite unique and very different in musical styles, yet the pairing fitted together very well indeed. An inspired billing if you like.

Mortad opened proceedings and from the off, Somi had the crowd on the edge and up for it. The setlist flowed with each track hitting you like a juggernaut and leaving you open mouthed and wide eyed. Mortad carry a big fucking sledgehammer and you better duck if you see it coming towards you.

This is a band with a seriously powerful armoury and some seriously interesting guitar work going on, courtesy of Andrew Matthews of Snakebite who was standing in for Johnny Hughes. This could be the element that gets them more noticed than their comtemporaries because it gives their thrashy, deathy, black sound a different dimension and provides the listener with plenty of surprises along the way.

Joseph Perumal looked so comfortable on the bass – totally in command and at one with the music. It was a pleasure to see a band so accomplished and with a front lady like Somi, who is truly capable of lighting up any audience, the sky really could be the limit for Mortad.

Mortad are currently advertising for a second guitarist and once that position is filled, their sound could be taken to a whole new level. I will speculate and say that the second guitarist will be responsible mainly for rhythm, thus freeing up Johnny to expand his lead sound even further and take it to a new dimension. For sure, this will be interesting.

I’ve said a lot about Pythia in recent months and tonight just reinforced the whole lot.

There’s a mystical, ethereal quality to Pythia which does not dilute their Metalness in any way at all. There’s also a real determination in the band, one which coupled with a solid understanding between the band members and incredibly strong songs performed at a staggeringly high level makes Pythia possibly the hottest prospect in Metal today.

The band’s confidence seems to have grown since the last time I saw them, not that it was ever lacking before. But this time round they seemed even more assured than on previous outings and this obviously bodes well and is with good reason.

But the brutal reality is that there is still a long way to go before they receive the success their creativity so badly deserves and it will take true Metal spirit to travel that long road to the end. Pythia are probably going to have to pay their dues in full but they have the spirit to do just that and once they do get to the top, they will have earned their plaudits in fine style and fully deserve them.

Success: The favourable or prosperous termination of attempts or endeavors. “I’ve been in purgatory, I’ve been in chains for oh so many years, And it’s a mystery, How this neglect can bring me ever near.”

There is no decent YouTube footage of this gig so here are a couple of select studio tracks from Britain’s best two female fronted Metal bands.

Wannabe? No – Pythia and Mortad just are!

Previous article
SARAH TIPPER: ‘EVISCERATED PANDA’
Next article
EMBRACE THE FUTURE AND DE-MYTHIFY THE PAST