Mark Taylor recently spoke to Doogie White about his time with Ritchie Blackmore’s Rainbow making the album ‘Stranger In Us All’ and the tour to promote it.

The interview is in two parts and here they are…

Originally filmed for German TV broadcast on Rockpalast, this Dusseldorf show from 1995 sees Ritchie Blackmore at his demonic best for the last time before he and his wife Candice Night went skipping off to the hills hand in hand to gaze into each other’s eyes and play renaissance music, much to the dispair of many ardent long haired rockers.

Heavily bootlegged over the years, this is the first time that many will get to hear the full show captured on the ‘Stranger In Us All’ tour. Available on both DVD or as a double CD package, fans can once again marvel at the delicate beauty of Ritchie Blackmore at his ferocious best.

Joining Blackmore were the then largely unknown at the time Scottish singer Doogie White, with Chuck Burgi (BOC, Aldo Nova) on the drums, bassist Gregg Smith (Ted Nugent, Alice Cooper), Paul Morris providing the keys for the live shows and also a young Candice Night provided angelic backing vocals on ‘Temple Of The King’ and the sublime ‘Ariel’.

Classic Rock wasn’t being dealt the best of cards in the mid nineties and here is an interesting document of what could’ve been had the Blackmore/White partnership had stayed together. The underrated album ‘Stranger In Us All’ album features heavily in this set with some songs in true Blackmore tradition getting the extended treatment in which the guitar maestro plays captivating solos driven by the mood of himself and the audience.

‘Hunting Humans’ and ‘Ariel’ are heavenly alluring whilst ‘Black Masquerade’ and ‘Hall Of The Mounting King’ has Blackmore upping the ante with frantic fret work. It’s also interesting to listen to Doogie White take on the work of Deep Purple with ‘Perfect Strangers’, ‘Burn’ and ‘Smoke On The Water’ where he does a more than an amiable job which would later see White top the wanted list for many of the big game players.

Hard to believe it’s been 18 years since Blackmore plugged in his white Stratocaster for a full 90 minute show. A whole generation of fans are missing out on the genius of the Man In Black. Rarely has film captured Blackmore at his best, but this package will do very nicely. 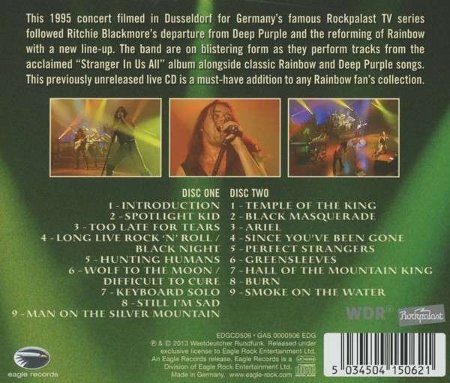