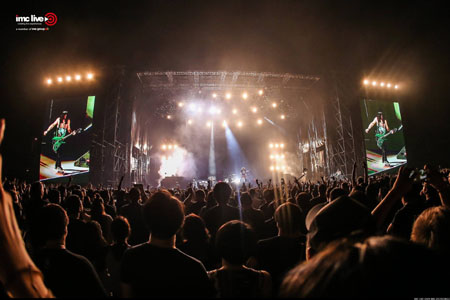 They said it would never happen in this lifetime, but seeing is believing as Axl Rose reunited with original members Slash and Duff McKagan and rolled back the years as if it was 1993 on the ‘Use Your Illusion’ tour all over again.

For many younger fans this was a once in a lifetime occasion, having been too young to see the classic line-up first time round.

Bangkok, the city of angels, where the grass is green and the girls are pretty, was well up for this gig with fans arriving by the thousands early in the afternoon to beat the notorious rush hour traffic jams, the Singha beer flowing from the stalls set up outside in this hot and humid city and the atmosphere surrounding the stadium bordering on euphoria.

The hysteria created by the world’s most dangerous band was still highly evident here in Bangkok some thirty years after the release of the classic debut ‘Appetite For Destruction’. 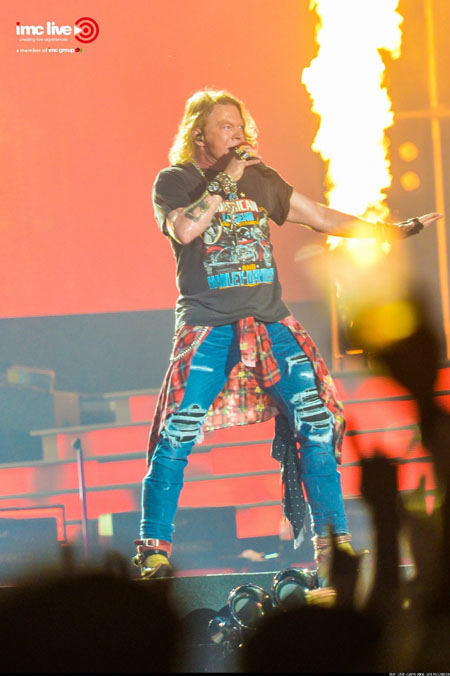 Queues for the merchandise snaked in all directions with the demand for a souvenir t-shirt extremely high, especially for the three special Bangkok only designs. In fact every t-shirt was completely sold out before the end of the show.

Held in a football stadium – the SCG Stadium is home to Thailand’s leading Premiership club Muangthong United – where Guns N’ Roses put on a knockout performance which will be talked about for years to come.

An intro of the theme from ‘Looney Tunes’ was followed by the announcement of: “Bangkok, from West Hollywood, the ladyboys Of rock’n’roll… Guns N’ Roses!” but there were no cartoon capers as the place went nuts when the band ripped into opener ‘It’s So Easy’, just like the way they did back in their early club days.

It was a magical site seeing Axl, Duff and Slash side by side again, all still looking the epitome of coolness and swagger. 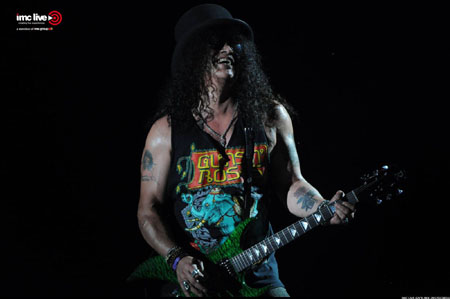 Gone is the kilt, but Axl Rose looked the wild man in ripped jeans with lumberjack shirt hanging from his waist, complete with leather cowboy hat replacing the bandana. Duff McKagan still has his punky edge with short blonde spiky hair and Slash still looks his usual trademark self in top hat and shades wearing one of the prized Guns N’ Roses Live In Bangkok t-shirts featuring a bright green elephant. Only a cigarette hanging from his mouth was amiss.

The venue danced to ‘Mr Brownstone’ before Slash teased the audience with that recognisable riff as Axl Rose barks: “You Know where you are? You’re in the jungle baby…”

The venue is totally rocking with the fun and games of ‘Welcome To The Jungle’ and even Axl raises a smile at its climax.

Slash was well on form and perfectly suited in the band where he belongs as he cranks out a fabulous Metal flamenco riff to the steam rolling ‘Double Talkin’ Jive’. 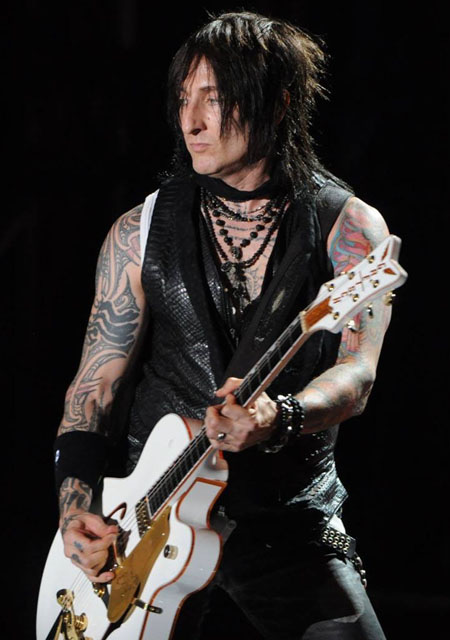 This is by no means just a nostalgia trip either as four songs from the controversial ‘Chinese Democracy’ album are performed with both Duff and Slash adding some extra welly to these great often overlooked songs, including the title track and the synth laden ‘Better’ which included added vocals from second keyboardist Melissa Reese.

The two keyboardists are not over-imposing, only making themselves heard when need be, for example on Dizzy Reed’s spine tingling intro to ‘Estranged’, one of a few epics that were totally spellbinding with Axl’s dominating presence and emotion.

Duff McKagan sang his Misfits favourite, ‘Attitude’, while Slash would add little bits of his influences here and there including the intro to Jimi Hendrix’s ‘Voodoo Child’ at the end of a stunning ‘Civil War’ and later with a snatch of Led Zeppelin’s ‘Babe, I’m Gonna Leave You’ before the ballad ‘Don’t Cry’.

That’s what makes the return to Guns N’ Roses of Slash and Duff so superb; a special chemistry that is skin deep in the roots of rock’n’roll and makes their own material come alive with brutal honesty. 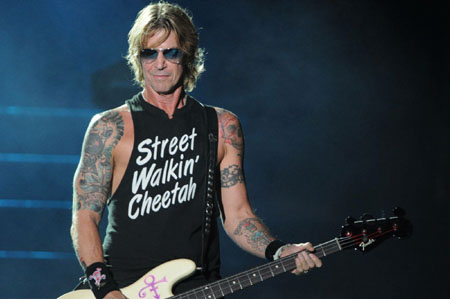 The mind bending and complex ‘Coma’ was magnificent, performed by a live unit that really knows how to work together with cutting sharpness.

Slash and rhythm guitarist Richard Fortus duet a striking instrumental take on Pink Floyd’s ‘Wish You Were Here’ that bleeds into a swirling segment of Clapton’s ‘Layla’ as Axl Rose appears on the grand piano with a ring larger than Liberace’s for a monumental ‘November Rain’.

Taking breathers with ‘Yesterdays’ and ‘Knockin’ On Heaven’s Door’, The Gunners ended the main set with an absolute suckerpunch version of ‘Nightrain’.

A raucous version of The Who’s ‘The Seeker’ in the encores was rounded off with a storming ‘Paradise City’ ending a jaw dropping, and at times unbelievably excellent, show that clocked in at just under three hours long.

Get In The Ring muthafuckers, because you’ll be a fool not to be knocked out by this comeback. 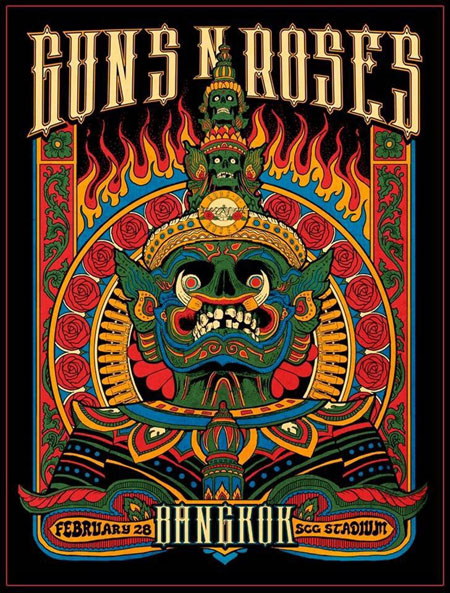