Iron Maiden: Thirty Years On The Edge, And It’s Far From Over Yet

PIPPA LANG spends a weekend at London’s 02 Arena in the company of IRON MAIDEN, and lives to tell the tale of thirty years on the edge of the Maiden Family, with references to the ‘hilarious debacle’ of her first interview with the band in 1980.

“Of all the people in the 02, it had to be you!” Bruce laughs, and we share a quick peck, because he’s being hustled away at the end of a long weekend.

It is the Aftershow party for Maiden’s second 02 Arena gig, and the last night of ‘The Final Frontier’ tour which is, of course, just the ‘pathway to The Final Frontier’ rather than the actual… This Bruce announces onstage at both 02 gigs and, presumably, the rest of the tour.

When I express dismay to Dave Murray about the inevitable day the band break up, he confirms, “that’s not going to happen for a long time.” Reassurance for the legions of Maiden fans around the world. Indeed, I can exclusively confirm that Eddie’s contract has been extended indefinitely!

Last night (the first 02 gig), 5th August, was exactly 31 years to the day that I interviewed Davey, Steve and Paul Di’Anno at Morgan Studios, London, during the recording of their third single, a cover of Skyhooks’ ‘Women In Uniform’. Wet behind the ears at only 21, this was my first-ever interview, and a hilarious debacle. I still have the cassette recording of it to embarrass myself with from time to time. But there’s some priceless banter on there, particularly from guitarist Dennis Stratton and drummer Clive Burr looming about in the background. More on that later.

So, “of all the people”, tiz I who is chosen to restart the Mexican Wave at tonight’s gig, in the middle of ‘Running Free’. Disgusted with ‘audience stage left”s limp-wristed wave, which has wilted pathetically in the middle, Bruce decides to give ‘stage right’ a chance to redeem the situation, and swings his gaze in my direction. Standing furthest right than any other person, it appears I will be the ‘chosen one’, as Bruce shouts:

It takes me a while to suss that I’m wearing white in a sea of black. Bruce is squinting, as if perhaps he does recognise me, but isn’t too sure. It’s been a while, after all, since he surprised me at a Hallowe’en party at London’s Metropolis Studios dressed as an alien gnat.

Anyway, I’m proud to say I – the, er, ‘lady in white’ – manage to instigate a rather exuberant Mexican Wave (it’s all there on You Tube).

Like I said, this is the last gig of ‘The Final Frontier’ tour, and I’ve rarely seen Maiden play better, or with more energy. But then, they’ve always played every gig as if it’s their last.

Bruce looks like he’s been working out, galloping around like a rugby player on steroids in his ‘Psych Ward’ t-shirt and beanie hat. The three guitarists dance around each other as if choreographed but, of course, it’s just the almost telepathic instincts of those who’ve played together for so long that prevent them crashing into each other.

I’ve never really noticed before, but Dave occasionally breaks into funny little jigs (“it’s my Irish roots,” he chuckles later), and Janick Gers is hilarious – mincing about like a ballet dancer, occasionally raising a long, skinny leg mid-solo. Steve Harris, as usual, is as solid as a rock, legs planted on terra firma, head nodding furiously in time to the music (they should make a ‘Nodding Harry’ for cars!) and Nicko, well, at least he has Sooty for company at the back.

This year’s set has been scrupulously planned, and now executed with devilish skill. A splendid ‘best of’ melee of songs I’d dare anyone to complain about. Even the pre-gig intro tape has been seriously ruminated over, the joie de Maiden bubbling through the 02 before they even hit the stage, UFO’s ‘Doctor Doctor’ stirring up a wonderful rapport and a mass, energised chant.

By the time Nicko’s massive drum intro to ‘Satellite 15… The Final Frontier’ signals Maiden’s arrival, the excitement is tangible. Like a football match… But wait.

I caught some of Dragonforce’s support slot last night and, frankly, they’re no more energetic than Maiden, and have the benefit of advanced technology to boost their sound. Having met ZP only a few nights earlier – what a nice guy! – I was curious to check out the new singer, Marc Hudson. Here’s a boy around the same age as Steve Harris and Dave Murray when they first started Maiden, and playing his second-only gig at the 02 Arena (which he openly enthused about: “not bad, huh?”, though to little response). What a buzz. But will Dragonforce still be around in thirty years?

Not unless they can extract the kind of chemistry from their music and performance that Maiden do and convey that to an audience. Throughout Maiden’s set, we are reminded just why it is that entire families treat their gigs as family outings.

Like football matches, there is much to chant about: ‘Two Minutes To Midnight’, ‘Blood Brothers’, ‘The Evil That Men Do’, ‘Iron Maiden’, ‘Fear Of The Dark’, ‘Running Free’… the list goes on. And like superhero movies, there is much to amuse: the sight of all those Dads running around the stage like Marvel Heroes!; and much to excite the senses: Eddie, of course, being the predominant icing on the cake of any Maiden gig, despite the appearance of some upstart, a horned bull swaying about during ‘Number Of The Beast’.

At first, Eddie is a disappointing lump lumbering around stage playing guitar, but then, for ‘Iron Maiden’, his gargantuan green head rises up behind the stage, Eddie’s fingers crawling towards the band, as if he’s about to climb into the audience. Finally, he disappears back behind the stage into his cage (I’ve seen it, honest!) until the next tour.

Like I said, it isn’t time for Eddie to run free yet (ouch), for the band have at least another album in them yet. And he’s not about to be usurped by some beasty either!

Fabulous. But the Aftershow is still to come. The band have pulled out the stops by having not only Aftershow parties for both gigs, but Preshow parties too. It is at the final Aftershow where most of Maiden’s old friends, roadies, band members, fans and family gather to catch up on old times. Obviously, there are a few journalists, record company personnel, etc., too, as a total of 800 peeps are staggering up and downstairs at the 02’s three-storey Alphabet City, quaffing large amounts of free booze and food till the early hours.

But Maiden’s original drummer Doug Sampson is here, a couple of other ex-band members (who I’ll mention later), plus Dave ‘Lights’ (original lighting man), Steve ‘Loopy’ Newhouse (one of their first roadies), fans who’ve become friends, and the band’s families, including Janice, Dave’s sister, who greets me as if we haven’t seen each other for thirty years. Well, we haven’t.

I first met Maiden at The Rainbow in London’s Finsbury Park in 1980, when I was working for the long-defunct Sounds and Record Mirror. A short, but unforgettable acquaintance with a member of this band who were about to go global has developed into a lasting, if distant, friendship.

Years go by between tours, of course, but I am always ‘sorted’, treated well, and allowed access to the ‘Family’ whenever they’re around, and for that I’m infinitely grateful. In return, I have never abused or exploited that privilege. Hey, even the vinyl copy of ‘Iron Maiden’ Dave gave me remains unsigned. I wouldn’t dream of asking! 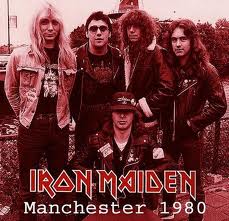 I still remember going to the Murray household in Clapton all those years ago, where Mrs Murray used to iron in the hallway because there was no room elsewhere to put up the ironing board. Dave’s parents were salt of the earth, Mr Murray a big, solid Eastender, both of them lovely people, now sadly gone but not forgotten.

So, at that time, in August 1980, the line-up of Maiden was, of course, Paul Di’Anno, Steve Harris, Dave Murray, Clive Burr and Dennis Stratton (who would be replaced by Adrian Smith shortly after). Bruce was still Bruce Bruce of Samson, and hadn’t yet been kidnapped by Maiden, and Nicko was still hammering away for French rockers Trust.

I met them that memorable day at Morgan Studios, North London, where producer Tony Platt was mixing ‘Women In Uniform’, Maiden’s only song never to appear on an (original) album because, frankly, the band didn’t really like it. 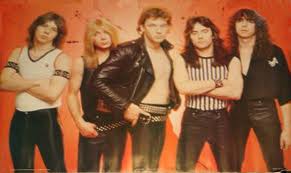 What followed that day round a table in the bar at the studios was a total farce, with me getting constantly poked under the table and giggling most unprofessionally. Consequently, Paul Di’Anno grabbed my list of questions and decided to read them out himself:

“‘Do you call yourselves Heavy Metal or… levvy rack?’!?!” He squinted at my bad handwriting.

(The most nerdish question of the NWOBHM era should read ‘…heavy rock’ of course!)

Dennis Stratton and Clive Burr, meanwhile, can be heard in the background on the tape, both assuming the voice of David Bellamy (enthusiastic TV gardener – google it!) in turn impersonating Rod Smallwood, Maiden’s manager. (Sort of three people in one – yes really.) 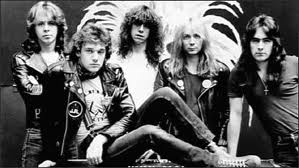 “Tony Platt?!” The Stratton/Bellamy/Smallwood person roars at one point, referring to Maiden’s producer, “I call him Tony Pwatt!”

At which point Dennis and Clive snort uproariously, and the real Rod ‘Smallwallet’ Smallwood, ‘The Sheriff Of Huddersfield’, walks in…

“‘ey oop! What’s goin’ on ‘ere then?!” says he, before buying me a drink, necessitating Grand Opening Of Wallet, an unheardof phenomenon in Rod’s case.

Well, you had to be there really. There is absolutely no point trying to transcribe the tape. It is just a wonderfully silly capsule in time, catching Maiden just before they went supersonic. A strange feeling to know a band just before they step through that door and get mobbed by the rest of the world.

I keep that tape under lock and key, and all I can say is, thank God I’ve interviewed them several times since, in a slightly more professional manner! 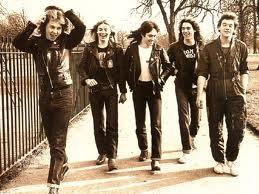 Back to the present, and apparently the two ‘Bellamy’ brothers are actually here at the 02 Aftershow. It’s been decades, I believe, since Harry and Dennis have seen each other, but Maiden have been keeping in close contact with Clive Burr, who was stricken by multiple sclerosis in 2004. Indeed, the band are responsible for setting up the Clive Burr Multiple Sclerosis Trust Fund and have staged many charity gigs for him. Tonight, it appears, is a night of many reunions, much nostalgia and more than a hint of sadness.

An unforgettable weekend as only Maiden can host. Fantastic to touch base briefly with Harry, Janick and Adrian. Nicko seemed distracted, and I wonder if this has anything to do with his friend Jon Lord’s recent cancer diagnosis? They’ve been working on a project called ‘Who Cares?’ with Ian Gillan, Jason Newsted and Linde Lindstrom – but that’s obviously on hold while Jon seeks treatment. 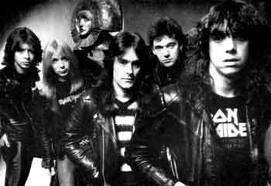 Highlight of the weekend for me: quality catch-up time with one particular, very old friend who is as funny, sincere, gentle and unflappable as he was thirty years ago living in a two-up two-down in Clapton.

Oh and, sorry, can’t resist this one: I’d rather be Maiden’s Lady In White than Chris de Burgh’s Lady In Red anyday. Ouch.

Iron Maiden: Thirty Years On The Edge, And It’s Far From Over Yet 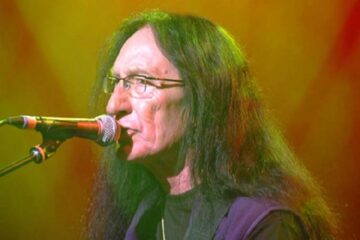