This is not just a review of a rock album for me. This is a bit more serious. 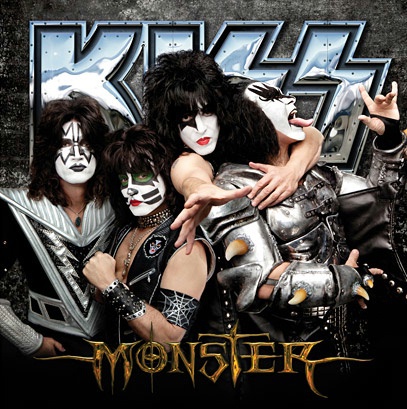 Kiss means a lot to me. I’m one of those hardcore fanatics.

I say that, yet the last few original albums they’ve done haven’t done much for me. You’d have to go back to ‘Hot In The Shade’ to find a Kiss album I can honestly say that I really liked.

Fans that don’t like the band’s music? Yeah, I know that’s a tough one, which is why each new Kiss release means so much to me. I really want to like these things but their output has not been consistently good over the years.

Don’t get me wrong, there’s been a few standout tracks in that time. ‘Unholy’, ‘Modern Day Delilah’ and ‘Dreaming’ instantly spring to mind. But as full consistent albums they’ve failed in my eyes.

So will ‘Monster’ live up to my hopes or dash them again?

The opener ‘Hell Or Hallelujah’, you’ve probably heard around the net by now. It’s a great rocker, Kiss back on form, Paul singing his ass off and Gene backing him up.

Actually that’s one thing there’s a lot of on this album that harks back to the early days. You can hear the personality in Gene doing Paul’s backing and vice versa rather than the bland harmony gang vocals of some recent albums. I like it!

Track two is as it should be, a rocking Gene tune, ‘Wall Of Sound’. Lyrically Gene has thankfully stayed away from the old “log in your fireplace” sexual innuendo. Perhaps it’s the influence of marriage on him or just finding that he has now used every possible double entendre in the English language. This is a rock and rock self-empowerment anthem with a simple yet effective riff. That’s what we wanted, thanks Gene.

The third song on many Kiss albums has traditionally been the strongest Paul song to look out for. ‘Sure Know Something’, ‘Lick It Up’ and ‘Hide Your Heart’ were all third tracks. Yet again this album doesn’t disappoint. ‘Freak’ is Paul this time giving it the rock and roll self-empowerment vibe over a huge chorus. It was even talked about at one point having Lady Gaga sing this song. I’m not sure how serious they were about that idea. But I for one am more than happy they kept to Paul.

Already, full credit to Tommy Thayer and Eric Singer. Unlike ‘Sonic Boom’ they don’t sound like they’re trying to be poor Ace and Peter imitators. Tommy is himself a great guitarist and this time he gets a chance to show it. Rather than stringing together a line of Ace-isms he comes across as a great bluesy rocking soloist in his own right.

Eric also has gone back to his own drumming style that we first heard on earlier Kiss albums like ‘Revenge’ or the classic Badlands debut. Again he is obviously a quality drummer and doesn’t need to be held back trying to play like someone else.

Gene gets another track next, ‘Back To The Stone Age’. Another simple yet effective riff which Eric Singer pumps along with a chanting chorus. Gene’s lyric this time is a rant against modern technology dreaming he could go back to the care free pre-mobile days. It’s another winner.

Paul’s ‘Mercy’ is the first sign of weakness on the album. It’s not terrible, but it’s not the best song they’ve ever done. If anything this track is pulled back from doom by the performances each have put it. Eric’s drumming, Tommy’s riffing, Paul’s vocal and best of all Gene really pulls out a blinder on both bass and backing vocals. This team really rocks!

Almost Beatles-esque in places ‘Long Way Down’ also has the feel of some top rocking musicians jamming together and bouncing off each other rather than slapping down a series of clichés in separate sessions as has unfortunately happened with some previous Kiss albums. Paul pulls off a great melody and we’ve got another winner. I’m getting the feeling that this could be a great album.

‘Eat Your Heart Out’ is Gene back to his old tricks. “A hot mess is just what I need”, he tells us. Thanks Gene we didn’t really need to know that. What would on previous albums have been thrown away is saved this time by a great harmony chorus. Really every time I think this album is going downhill they pull themselves back.

‘The Devil Is Me’ is Gene back on form being evil in the style of ‘Unholy’. It’s works lyrically and has a great evil melody but most of all it rocks, and Eric and Tommy both play their parts to the full.

Now we’ve hit a point I can’t go along with. ‘Out of This World’ is Tommy pretending to be Ace on vocals. Not that it’s a bad song. If this was on Ace’s last album it would have been one of the best tracks there. It’s also got a great Ace-alike guitar solo. But why does Tommy keep doing this? Do Gene and Paul tell Eric too? Why does he have to be someone he isn’t? Singing about his “midnight rocket” just doesn’t do it for me.

Then Eric does the same. He sings a bland rock and roll tune called ‘All For The Love Of Rock & Roll’ a bit like Peter might have done. It also sounds uncomfortably close to a Duff Tarts song of the same name for my liking.

My solution for these two last tracks is just to skip them and concentrate on the positive songs.

The next track ‘Take Me Down Below’ didn’t start too promisingly either. Oh no I thought, Gene’s back to his old tricks. “My ship was ready to ride”, he tells us. Oh no, he hasn’t run out of double entendres!

But as I was about to dismiss the song, Paul comes in singing the second verse. Have you heard the Paul vocal version of ‘Not For The Innocent’? This is like that where he really picks the song up to a new level. It now becomes banter between our two heroes and again Eric pounds the whole thing along, almost sounding like classic AC/DC. Hang on, Tommy’s doing the Ace-isms in the solo again – stop it would you!

‘Last Chance’ is another strong Paul song and having been disappointed so many times by their recent releases, I kept cynically wondering when they would run out of songs but here they’ve kept one of the best till last. This could have been the single. A great ending to Kiss’ first truly great album in a long time.

You’ll notice how well I’ve been behaved. Through this whole thing I’ve not mentioned Tommy and Eric in other people’s make-up on the cover. Nor the fact that Eric’s even wearing a picture of Peter on his jacket! Don’t get me started on that one.

In fact let’s leave it out of spoiling what is otherwise such a happy occasion.

A brilliant album from my heroes!