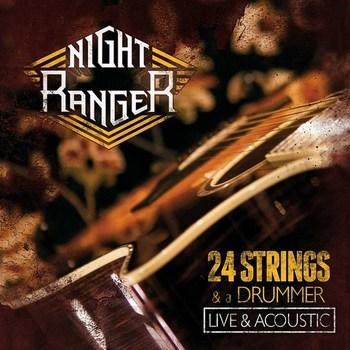 If it hadn’t been for an unfortunate incident at one of their gigs, we would arguably have never had the pleasure of these unplugged live albums. ’24 Strings & A Drummer – Live & Acoustic’ is a perfect illustration of how rock possesses a flexibility that few other genres share.

This was recorded at Bob Weir’s Studios in San Rafael, CA in May this year before a select invitation only audience as a celebration of the 30th anniversary of the release of the band’s debut album ‘Dawn Patrol’. It features new acoustic arrangements of some of their greatest hits and favourite album cuts.

Said guitarist Joel Hoekstra in a recent interview: “We really wanted to do something different for the die-hard fans, the ones who’ve been following Night Ranger since the very beginning. In addition to it being a live recording, we’ve also updated many of the songs we do vocally and added new sections to them.”

Well, they’ve certainly managed to create a fittingly good album that will not only prove irresistible to Night Ranger completists but will also make a worthy addition to any CD collection. The new arrangements not only offer something new but also take some of rocks most iconic melodic classic songs and turn them into the sort of mellow Americana that used to be big in the seventies.

’24 Strings & A Drummer – Live & Acoustic’ (plus a piano) is a breezy, sun shiny album that’s perfect for a summers Sunday morning when there is nothing going on. It has an easy going roll to it that makes it the perfect companion to that first hangover busting mug of coffee.

The songs themselves work well acoustically, swapping the urgent punch of the originals for a more laid back, almost country groove. It is to the credit of the original song writing and the latter day arranging that the songs work just as well without a Marshal stack as with.

Night Ranger’s big hits are all here, a surprisingly fiery ‘Don’t Tell Me You Love Me’, ‘(You Can Still) Rock in America’, ‘When You Close Your Eyes’ and ‘Sister Christian’. There is also a cracking version of Don Henley’s ‘Boys Of Summer’ as a CD only bonus track and the accompanying keyboards occasionally take ’24 Strings & A Drummer – Live & Acoustic’ close to Bruce Hornsby territory, like on ‘Sentimental Street’ for example, but despite initial reservations, every track here works well to the point that there is not a bad track on the album with the newer material such as ‘Growin’ Up In California’ sitting comfortably with the classic stuff.

I’m not going to pretend that I am sufficiently familiar with Night Ranger’s stuff to give a blow by blow comparison of each track because I am not. What I will say, however, is that these songs here seem to have transposed well, breathing new life into them, creating sufficiently alternate versions to satisfy even the most cynical Night Ranger acolyte.

The unplugged stage offers the chance for the artist to be seen and heard in the raw where there are no places to hide. Here the performances are exemplary and even the inevitable mistakes and rough edges sound right, their inclusion suggesting little interference with the tapes in the editing suite.

’24 Strings & A Drummer – Live & Acoustic’ is to be issued as a CD/DVD package. The vid is the same show as the CD but for some reason minus ‘Boys Of Summer’. The bonus material features include a Night Ranger All Access article, the ‘Growin’ Up In California’ video and a making of the album ‘Somewhere In California’ vignette which beefs up the vid to a hundred minutes.

The unplugged format tends to get over used these days, yet ’24 Strings & A Drummer – Live & Acoustic’ is a refreshingly pleasant surprise.