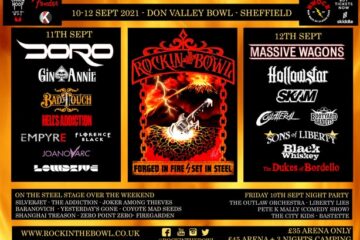 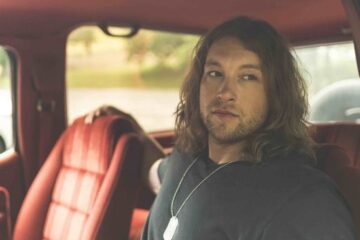 Shortly before I joined Bruce Dickinson’s solo band he asked me, “Are you afraid of flying?”. I said “No”. Neither of us was fully explaining ourselves.

I assumed that he meant we might go on some flights on tour. You can’t swim to America. There’s no ferries to Japan. That seemed reasonable, we’d get a big cosy jet airliner. Probably first class, with champers, I reckoned.

He probably thought that when I said “no”, that I meant that I was an experienced flyer, probably half a million air miles under my belt, a couple of parachute jumps and a spell in ‘Nam in the choppers.

What I actually meant was, ‘I’ve never been in a plane, so I’ve never been scared in one’. Well, I once puked inside the sawn off front half of a Lancaster at the Imperial War Museum, with my Mum. Does that count?

What he actually meant was that he’d be flying us himself every day across America on tour in a little twin propeller, seven seater rust bucket, that probably had done a spell in ‘Nam.

What should be born in mind here is that this was long before Bruce became known as a pilot. It was before he qualified to fly airliners and long before all that Flight 666 and Bruce Air trips stuff. All I knew was that he said he had a basic pilot’s licence and he once sang ‘Aces High’. 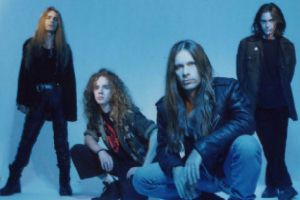 So my first ever flight was on a proper BA Jumbo to Houston to start the tour (it was the ‘Balls To Picasso’ 1994 Tour, for those who count these things). The flight was not too bad, I drank a bit mostly. And it was a nice big safe plane.

Then the next day we were driven to a little airfield in the middle of nowhere. On the runway was our own little hired plane. It wasn’t looking very promising. No big comfy seats. No headsets, movies or stuff. No air hostess with drinks. No toilet. It looked like a metal De Havilland Mosquito (for those who used to count those things). I wasn’t too keen at all to be honest.

There was me, Bruce, Alex Dickson (guitarist), Alex Elena (drummer), Bob Ward (Tour Manager) and a local guy who was going to act as co-pilot and navigator.

Alex Dickson was fine about it. He’d flown with Bruce before and he’d sleep through anything. He never spent a moment on that plane awake for the whole tour as far as I noticed. Alex Elena, like me, was a little concerned. You know, Randy Rhoads… it’s reasonable to be concerned.

Bob Ward looked like he was pulling the famous British Army Sergeant Major’s stiff upper lip. That’s the kind of courage that won us the Empire. Bob wouldn’t have panicked as the Zulu hoards closed in at Rorke’s Drift. He’d have died a painful death on the wrong end of an assegai, but he would not have panicked.

The local co-pilot guy was confident, but then he was American. They’re all confident aren’t they? Nothing wrong with that, but it doesn’t meant they’re always right, does it? 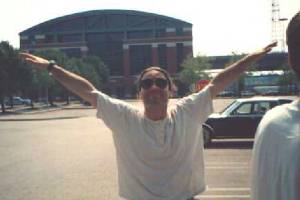 Bruce was in good form. He was excited. Perhaps too excited. Was he really going to fly this plane?

He had a load of advice and tips to help us understand the flight and therefore overcome any initial worries.

“If an engine goes down, we can run on just one. Sort of.” he said. I liked the initial idea, the “sort of” let it down badly.

“If the other one stops, I’ll do a nose dive,” he said. “Oh right?” I said. What I actually meant was “No shitting way, are you insane?”

He carried on “It’s like the biggest jump start ever. From that altitude we’ll have two or three minutes before we hit the ground. It’ll be no problem. Imagine jump starting a car down a really, really steep hill. It’d be bound to start in a couple of minutes, wouldn’t it?”.

Well, yes, I thought but then my life wouldn’t depend on it, if by any chance it didn’t start.

Oh, shit. Everything he said made me feel slightly less happy about this whole trip. I had hoped he would say if the engines stopped, we’d gently float to the ground and land in a field right next to a farm with fresh eggs and a buxom farmer’s wife.

“If, while we’re up there, you see another plane, just tap me on the shoulder and point it out”, he said. “I’ll probably have seen it already, but just in case, eh?” I was really losing confidence in this whole idea.

“We’ve got enough fuel to do the trip and a little bit extra” he said one day. “Just in case we can’t find the airfield or something. You can’t run out of fuel in these things you know,” he said.

“We could be stuck up there for hours then I suppose?” I said.

“Oh,” I said. It seemed the reality was a bit more grim than that.

Of course the fact that I’m here to write this column for you and that Maiden still tour and record is a plot spoiler in itself isn’t it? We didn’t die, yep, the flights went fine. Bruce, as we all know these days, is a great pilot. ‘Aces High’ shouldn’t have bothered me, it’s a Harris song.

We got so used to it I think I now prefer small planes to airline jet flights. It feels more comfortable to see out of both sides of the plane and the front, talk to the pilot and see his radar. You can see on the radar when turbulence is coming up and how long it will last, very cool and reassuring. You don’t spend hours checking in or any of that nonsense at private airfields.

Our tour was done in luxury compared to the poor crew and other bands on the bill (Jackyl and Richie Kotzen for those who count those kinds of things) who travelled overnight in sweaty tour buses. We stayed in nice hotels, had a quick flight in the afternoon and turned up to sound check freshly showered and ready to rock each day.

Dictators NYC Prove That Forty Years On, They're Still The Next Big Thing