There’s a few bands who have brought out their own branded alcoholic beverage this past few months so Iron Maiden are not the first to do this but they’ve done it in their own unique style and launched it with the typical class that permeates all Maiden product. 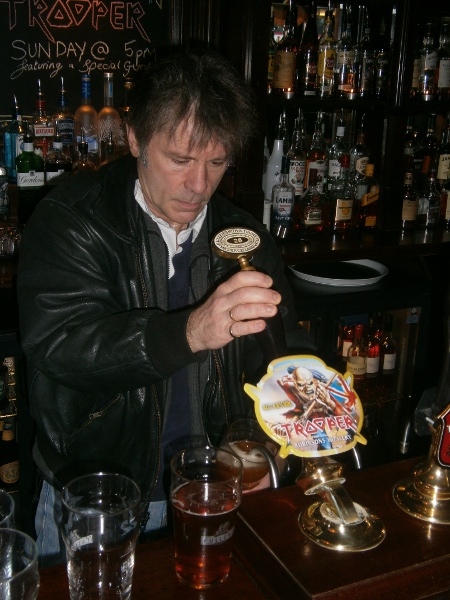 We hurdle drunkards that lay on the ground
And the Russians buy another round
We get so pissed we’re so far away
We won’t live to drink another day.

The world’s greatest Heavy Metal band released Trooper Ale, obviously named after one of their greatest and most famous songs, in conjunction with Robinson’s brewery in Stockport, England. There’s a really cool two-minute video at the bottom of this page starring Bruce Dickinson, who played a major hands-on role in the creation of Trooper Ale, which gives a good potted insight into how Trooper Ale came to be.

Now we all know that Bruce is a multi-talented genius who not only fronts Iron Maiden but drives huge passenger aeroplanes, has fenced at European competition level, is a published novellist and TV and radio presenter and all round great bloke but on Sunday afternoon, as you can see in the photo above, Bruce added yet another string to his bow and became bartender extraordinaire and pulled the very first pints of Trooper Ale.

Beer Of The Dark

The big question is obviously “how did it go down?” and it gives me great pleasure to report that this is a really good beer. It’s smooth, lightish and tastes really good and it isn’t overpoweringly hoppy or malty like some real ales are. It’s highly recommeded to all bitter drinkers and even those who usually enjoy the yellow variety of beer.

I’m also pleased to report that even after my seventh pint (of a seventh pint) there is no sign of a hangover this morning which speaks volumes of the clarity and quality of Trooper Ale. 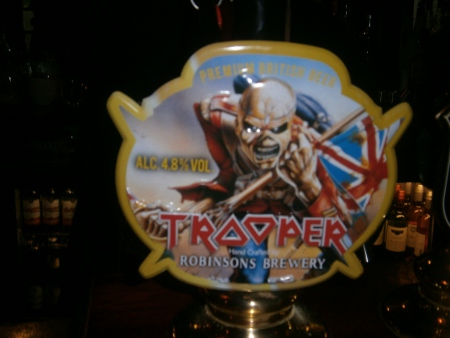 The Old Pack Horse is a really nice boozer on Chiswick High Road, not to be confused with The Packhorse And Talbot which is five minutes walk down the road. I hope nobody waited in the latter pub, only to end up disappointed.

The event had purposely been under-publicised and numbers were kept further down by a late change in time from 8.00pm to 5.00pm. This was because Bruce had to get Eurostar to Paris to hook up with Maiden for rehearsals for the band’s forthcoming summer gigs.

It’s very rare that you see/hear a pub thrown into sudden and total silence but that’s what happened when the man himself took up position behind the bar and drew the very first pint from the virgin barrel of Trooper.

The whole pub watched as he sampled the golden liquid and much to everyone’s delight, announced that the brew was up to standard. Then the real drinking began… 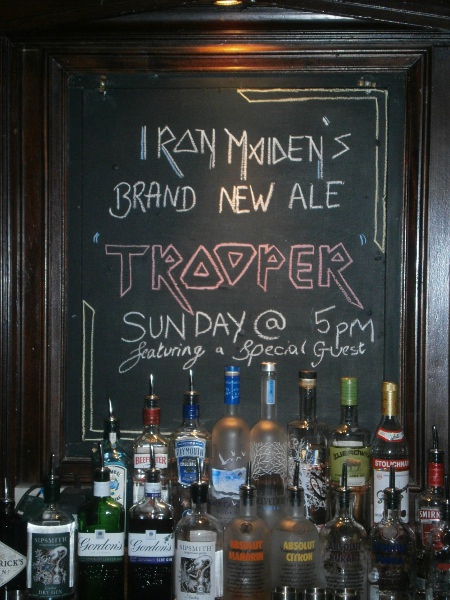 From Beer To Eternity

I had a good chat with Bruce and Iron Maiden were not mentioned once. I wanted to know more about the aircraft servicing company that Bruce recently formed in Cardiff because as well as indulging Bruce’s big passion, this company is also creating jobs for the local community, which is obviously most commendable.

His eyes light up when he talks about anything aviation related and he told me all about the various types of aircraft that they are currently or are soon to be working on which include a Sikorsky helicopter and a VC10 passenger airliner. Ironically, I was part of the RAF’s VC10 squadron some years ago in another life so we had instant common ground there.

Beer Is The Key

I can’t think of a better way to spend a Sunday afternoon that drinking pints of Iron Maiden beer pulled by Bruce Dickinson. It was slightly surreal but also highly memorable and the brew is sure to be a massive success.

And to top it all off, there is a painting of Lord Hogarth of Chiswick in the pub and the more we stared at it, the more it started to look like Chris Dale, MetalTalk columnist and Bruce’s bass player from his solo era.

What do you think? Can this be real or just some crazy dream? 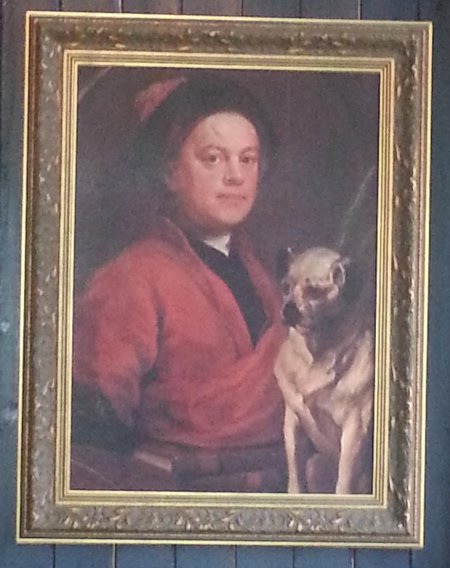 Click here for all you need to know about Trooper Ale…