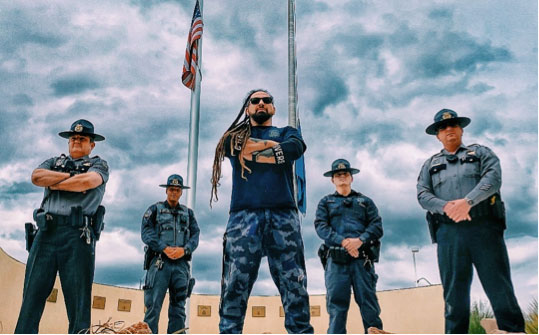 Bathory is a major supporter of his local law enforcement, as well as law enforcement throughout America. He frequently visits police departments to talk with officers and discuss various topics affecting law enforcement.

Bathory is also a major supporter of Nevada’s Injured Police Officers Fund, which was set up to assist Officers injured while working, or the families of fallen heroes. Indeed Bathory recently donated to the family of Sergeant Ben Jenkins.

Trooper Jason Buratczuk tells us: “Zoltan’s support of the law enforcement community and his willingness to assist a grieving department and family during one of the most tragic times in our agency’s history is amazing.

“He is very down to earth and always connects with our troopers on a personal level when he comes to visit. His continued love and support during this most difficult time is very much appreciated by our department.”

On 27 March 2020, Sergeant Ben Jenkins was shot and killed when he stopped to assist a disabled motorist in White Pine County shortly before 6:00 am.