Brisbane Black Metal outfit Vyrion return with their third album ‘Nil’, an eight track, forty-nine minute offering that is Black ‘N’ Roll at the core, but is as progressive as it is aggressive and as furious as it is nuanced.

‘Nil’ follows on from and expands on their 2014 vitriolic offering ‘Geo’, once again independently released and like all it’s predecessors, ‘Nil’ is an album that is so good it will sell itself. It is Extreme Metal which stands out amongst its peers.

Described as “A concept album, telling the stories of civilisations, from the cradle to their eradication by disease, Nil takes all prisoners on a vivid journey, basking in the glory of our war-mongering past and looking eagerly towards our ‘future.'” 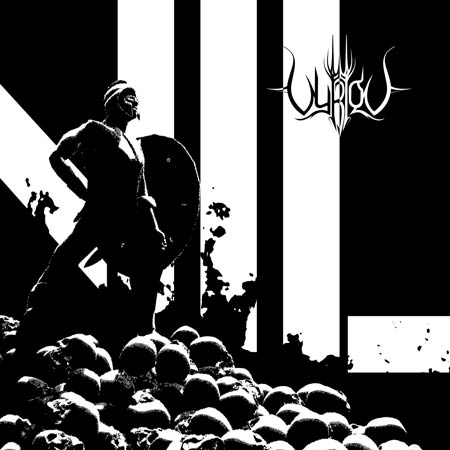 The harrowing journey begins with ‘Beleaguered’, a bleak and intense track from the offset, with a mournful underlying melody, slightly discordant midpoint lead and quiet passages that mirror the driving riffs that precede and succeed them. Every brutal wave is more intense than the last.

‘Beleaguered’ is a track which sets a precedence for the style and mood of most of the album, which across it’s duration is well varied both within the tracks and the individual tracks in relation to each other.

The pace ebbs, flows and meanders with intense waves building to a crushing, often driving intensity, with a good vocal delivery to match which is predominantly an acerbic hiss with an occasional deeper growl.

It is a hard album to pick favourite tracks, as it is an excellent listen all the way through to the driving, intense closer ‘Infect’.

But there are a few standout tracks that deserve an extra mention. The previously mentioned opening track ‘Beleaguered’, ‘Avalanche’ where the driving punchy riffing has a touch more of the Black ‘n’ Roll to it’s construct and the hauntingly intense, slower paced, but dramatic track ‘Monuments’, which is full of dark sinister intent.

There is no video for ‘Nil’, but a couple of tracks are available to listen on the Vyrion Bandcamp page where the album is available to pre-order or buy after the 26th October as a digital download.