Another good night’s sleep was had by all. We chucked our bags onto the van, ate a hearty but over-priced breakfast, pumped up the tyres and oiled the van before heading back up north to Sheffield, a three hour drive.

It’s days like this that sometimes can be a grind, having driven from Leeds, down to Norwich only to then have to drive back up. Tour tiredness had now hit us all and no entertainment was on the van as peace and quiet was welcomed. It’s hard at times having to live, eat and breathe the same space as five other people with constantly no time to yourself and being away from family and loved ones.

Somewhere along the way, Chris (who was driving) or Eddie (navigating) decided that the mundane and annoying female sat nav such be changed to French to make it more amusing.

Halfway always seems to be the hardest, as the initial excitement has waned and the slog of the journeys, work and tiredness kicks in.

It’s very lucky that all the V6 guys are very easy going and great lads, otherwise I can imagine it would be a whole lot more unpleasant for each and every one of us if there was ‘a bad egg’ in the box.

Today was a day that marked the return of the original bassist and our Glorious Leader Tony Newton, who had returned from his adventures in South America with the Iron Maiden lot. 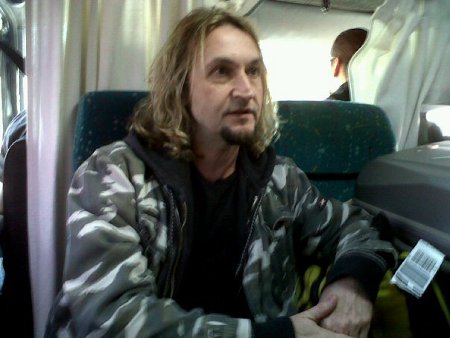 I felt sorry for Eddie Marsh, as he was just settling in to the swing of things and enjoying his time on stage, whereas from now on, the poor lad has been ‘relegated’ to Tech Crew.

We arrived at Sheffield train station at 3.20pm precisely, eagerly awaiting his return. One thing I noted was the very large and long water feature outside.

At least by now the sky was blue and the sun was out. All was still peaceful and quiet amongst my fellow travellers until the Tony’isms started being spouted – bless him 🙂

These continued, along with the guys admiring ‘the scenery’ and making amourous comments along with it.

Due to a delay on the trains, we had some time to spare, so a quick nip into McDonalds to grab some nosh, including the thickest milkshakes in the world! You couldn’t even get your straw in it.

Back to the train station where Chris wandered off to find the still absent Tony.

Minutes later, they both returned to the van. The tales and recollection of his Maiden adventures were told to us with glee.

Five minutes later we arrived at The Corporation and immediately loaded the gear in. Merch stand was set up whilst the guys soundchecked. It was good to hear the clarity and depth of the sound and how good it was.

As I went out to have a quick cigarette, I was met by an obvious looking journalist. He grabbed me and explained that he had travelled all the way from Macedonia to interview Michael. Now that is true dedication for you!

Upon arriving back at the Merch stall, I set up the pool table. Steve Conte was passing so I took the opportunity to ask him to sign, which he did. His little characteure was amazing! I thanked him deeply and off he scuttled.

Michael came down adorned in his stage gear and also took the opportunity to sign. With silver sharpie in hand, his hand darted around. With a quick nod, an appreciative look and big smile he thanked me for what I was doing and ran to the bus. He’s not a man of many words, but when he does speak, its always with a smile and an almost boyish naivety. 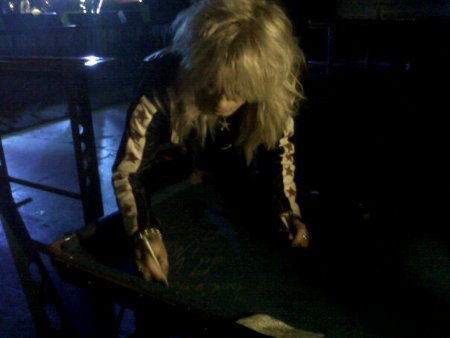 I quickly nipped to the dressing room for a coffee and a chat. Upon doing so, the guys from the Monroe camp grabbed us to ask if we would be happy to sing ‘Happy Birthday’ to Freddy, the Monroe’s tour bus driver, as it was his 50th. This didn’t come into fruition as I had to get down to my desk for doors. Along the way, I bumped into him and passed on my wishes. As we got talking, it became apparent that we both shared a common interest as we had both done time in the services.

A quick rush down and the madness began as people dribbled in.

N.Y.A.A.A were already on stage ready to perform. They had a new addition to their props in the form of an oil light which added to their psychaedelic aura.

The crowd were very supportive and receptive to their music and I believe they gained fresh followers.

The throng kept coming and the room filled up nicely for a Tuesday night.

With some photographers in the pit and a good grouping of Voodoo Six T-shirts at the front, the guys took the stage looking lively. This was the first night of having Tony back on bass and it was good to see him up there.

Ed had thrown himself fully into the tech/crew role and was feeling good.

With more action from Luke, Chris and Matt, their performance felt more energetic and was reflected by the crowd who also picked up the pace and got into it.

The lighting on stage and the sound emanating from the PA completed the atmosphere which by now had a real ‘party’ feel.

After their half an hour, all sweaty and rocked, the V6 guys left the stage and the crew came on to attend to the changeover.

As per usual the usual bar and fag breaks were taken.

Fifteen minutes later, the lights dimmed, the intro tape kicked in and the crowd regrouped, cramming themselves tightly in readiness for Michael and his troupe.

Seconds after, the room was awash with strobes flashing, spotlights whirling around in all colours of the spectrum.

The mania had begun! Leaping and swirling around, the Monroe camp were in full action. The crowd were already engrossed in the frontmans antics, not sure whether to join in or just to stand in awe at the spectacle. If that wasn’t enough, Michael stood on the monitors and lifted himself off the stage using a low slung beam hanging from the ceiling. The man is so full of energy, its unnatural!

The rhythm section, Sami and Ginger, seemed to be enjoying themselves, swaying quite merrily with each other and giving off a great vibe. Steve Conte on lead guitar was hammering out the solo’s and rocking it hard, full of rock attitude, pouts and headbanging. What a legend!

Karl seemed to be in his own world, bashing those drum skins like it was his only salvation. I can see why he is aptly named ‘Rockfist’ because he really smashes into his kit. 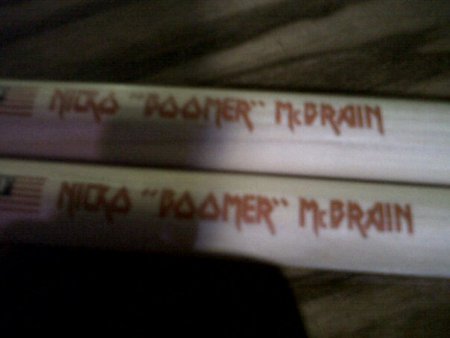 Who wants a pair of used Nicko McBrain drumsticks? Up for auction with the pool table!

Back at the Merch desk, I had been taking photos (which will appear here next week) of the show as the lighting was fantastic! This is probably one of the best shows for it.

Now, over the week, the Monroe tunes have really started to sink in and got to me. ‘Modern Day Miracle’ has a really catchy chorus, ’78’ (which is the single from the new album ‘Sensory Overdrive) is another great tune and really get me going.

I must admit, that at the beginning of the tour, I wasn’t really a fan of his work (each to their own), however, I have always admired the mans stagecraft, energy and full on performance and would happily pay money just to watch him perform.

The band left the stage for the first time. Fans stomped their feet and shouted his name, baying for more. Their wishes were granted when the troupe bounded back on.

This time, the enigmatic front man jumped off the stage and went for a wander in the crowd whilst singing. It was so exhilerating to watch the fans faces light up with ecstasy as they got to touch him.

With one final hang from the rafters, the guys left the stage to much cheering and applause.

The Voodoo guys had already loaded their gear in, so waited for the stragglers and hangers-on to vacate the main stage area so I could pack up my desk, load in and jump on the bus.

With this done and bum on seat, we headed to Preston for the night.

As Tony, Matt and Joe went and did the sensible thing and got their head down, myself, Eddie, Luke and Chris stayed on the bus for a ‘van party’ where much nicoteine and alchohol was consumed and chatted about anything and nothing in particular until 3am came and we decided to turn in. 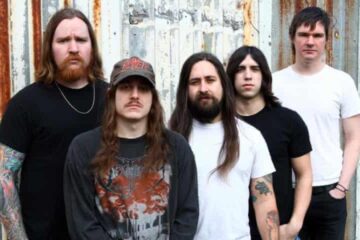