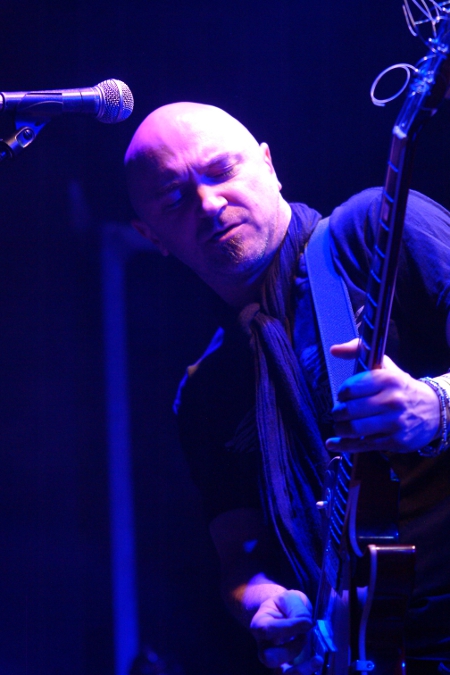 Waking up feeling groggy, we headed to the nearby Moto services to eat. Jacket potato, pie, chips, mushy peas and gravy were the menu for today’s nourishment while I settled for me morning coffee.

After noshing, we jumped onto the black horse ready for another two and a half hour drive to Nottingham’s Rock City. No entertainment today, just catching up on reviews and the videos posted on YouTube. It’s always lovely to see photos, videos and read the reviews.

With tonight being the penultimate gig and the last night of facing the ‘Lodge again, spirits were running high as they could with the effects of the cold still in full force.

Personally, this was going to be the best show for me as I was going to see me brother and close friends as it used to be my local venue as a youngster and so had sentimental value.

With the sun still blazing, we set up and loaded in. Michael and his gang had already soundchecked.

The crew were very helpful and the staff were on the ball, helping where ever they could. Once sound check was over for the V6 boys they retired to the dressing room whilst NYAAA took their turn.

During their set, I took the time to join the other merchies and got the stall ready. With half an hour to go before doors, I was brought up some shepherds pie, potatoes and carrots in a kebab carton along with some beers to munch at my post during the show. The location of my table was in a perfect spot, behind the sound desk looking at the centre of the stage. It is refreshing when you do actually see the shows and are not stuck out in the corridor by stinking toilets!

With the light now starting to dim and a slight chill in the air, the doors opened and the main upstairs room started to fill quickly. By the time NYAAA took the stage in all their psychedelic glory, there was a good 100 people watching their performance which went down a treat.

The dummies with their feather boas stood proud either side of the stage, with the new addition of the oil effect light which gave the effect of a lava lamp twirling round the performers.

Their half hour finished to a good reception leaving the stage free for the crew to set up for Voodoo Six.

With the lights dimmed, the silhouettes of people still drifting in could be seen with beverages in hands, all walking straight to the stage. Amongst them were a good show of Voodoo Six fans wearing their t-shirts with pride.

The atmosphere was building and the static could be felt charging through the air with the nervous excitement emanating from the audience.

At this point, I nipped out for some fresh air and to see how my brother was doing on his travels. All was good and due to arrive in five minutes.

Meaty riffs were now blaring and Luke’s familiar gravely vocals could be heard, indicating that the boys were in full action. It was lovely to see that people were into the music and rocking out to their performance which the guys were really getting into.

The stage lights were in full effect doing their job perfectly so every action on stage was shown for the crowd to see, accentuated by the spots giving the atmosphere a boost.

Soon enough, the last chord from ‘Long Way From Home’ rang through the air, the lights dimmed and the guys left the stage to a loud applause.

My brother was now in and stood beside me and had already had a quick mosh to the V6 lads and we had a quick catch up before the lights sparked up to chants for Mike Monroe to appear, which he and his troupe did. The energetic madness began and the crowd loved it!

Due to the stuffiness being produced from both the building and the bodies rocking I had to get some fresh air.

As I left the front doors, an ambulance was outside, with some poor guy looking very dazed being helped by his apologetic girlfriend into it. I felt sorry for him, moreso when I found out he had fainted and shat himself whilst doing so!!!

I quickly scurried back to my post to be ready for the onslaught at the merchy desk at the end of Monroe’s set which was now due to end.

The encore was done, and inquisitive fans came to the stall where the band were now at, chatting to admirers and new fans. Soon enough, the security was ushering people out giving us the cue to load out which was done just as quickly as the load in had been done.

Off we set, with peace and quiet on the bus, all still under the effects of flu now really hitting us.

To our surprise, there was no more ‘Lodging as we stayed in an Etap – which was a whole new ‘experience’ for me and one I don’t ever want to relive – slumming it on the last night of the tour! Sob, sob – gonna miss me lodges!

Nineteen minutes too late – Mr Pearce’s new track title! Matty was rather upset as we arrived 19 minutess too late past midnight to buy wine which only fuelled the party’s griping.

Etap! Pate! The rooms were like a static caravans, only more expensive and decorated in Ikea furniture. The whole idea of having a single bunkbed over the heads of the people in the double bed below brought much anxiety to us as we had to rearrange the sleeping as to who would be best to sleep on the bunks without it breaking.

Once this was sorted, with me, Tony and Joe ending up in the bunks and the others sharing the beds, all was settled. Until Matty noticed that the bed was fitted with a vibrating fire pillow for the hard of hearing.

Mr Eddie Marsh was totally speechless, shocked and stunned by the whole affair. Seriously, I had never seen him so, well, shocked, jaw dropped, eyes wide open and speechless!

His description of the room being ‘a kiddies playroom for adults’ sorta summed it up. Chris and Luke ended up sharing the double bed and me climbing up on the top bunk isn’t an easy matter when your tired, achy and looking forward to your own bed.

The glass door for the shower was in the bedroom and equipped with two ‘glory holes’ offered no privacy at all.

By now, Matt and the boys were starting to feel famished. A quick chat to the male receptionist and it was learnt that there was a 24 hour McDonalds just up the road. An executive decision was made and off we went.

We arrived and found that it was just the drive-thru facility and no ‘foot ordering’, so we managed to squeeze the poor splitter van round the corner. Just made it through the drive thru booths.

With the Maccie D’s ordered; Big Mac meals, cheeseburgers and 20 chicken nuggets with chips for Ed we settled into the car park and munched.

A police car had driven in before us which sparked many donut jokes alongside jokes with Matt for McHaggis to be launched throughout the UK.

With this being the last night of being together, the conversations turned to tomorrow and a sense of melancoly came on. We talked about what we were going to do the following week. It seemed that bed, rest and chilling was the overall consensus.

With that said, we drove back to the Spinal Etap and got our heads down for the final day.