The weather was bleak and was threatening to rain, so we jumped onto the bus and headed on with Russell Brand for amusement.

Getting deep into Lincolnshire, the weather broke into a downpour.

Memories of ‘another life’ came flooding back as we passed RAF Cranwell, where I had spent six years of my young adult life.

Stopping only for fuel, we arrived at the venue in good time. Dropping our gear in the dressing rooms, soundcheck completed and merch stand set up, we headed round the corner to the local Bar And Grill to satisfy the growing hunger.

Doors opened at 7.30pm so I got back to my station which luckily was located in the stage area, so again we ‘Merchies’ were able to experience the show.

N.Y.A.A.A took the stage with a nice huddle that had already formed, with more additions steadily trickling in.

The crowd it seemed, was a bit ‘stiff’ during every band’s performances, with not much movement happening throughout the night, however a hearty applause could be heard at the end of each song.

The young Bradford guys completed their half an hour set, leaving the stage to the crew for changeover.

There was a quick rush at the merch desk for the V6 and Monroe camp for last minute t-shirts and more interest shown in the signed pool table from the punters.

Due to the length in changeovers, the Voodoo guys had been allowed an extra five minutes, so they squeezed in an additional song, ‘Doing Me Wrong’, to their set.

Under glowing red lights, the boys enthusiastically hammered straight into ‘Like The Others Did’.

The attendance for a Monday night was very good, it had to be at least 200, which was fantastic. Well done guys for making such a great effort, not only to come out in dreary weather, but to come out on a Monday night and support live bands and keeping the rock rolling!

Churning through their unique riffs, the Voodoo guys delivered another top form set which the fans seemed to like and more new fans were gained, which was proven by the merch sales.

Ending with the apt ‘Long Way From Home’, they left the stage for the quick load out.

The house lights came back on and more alchoholic beverages were purchased whilst the Monroe crew set the stage up ready for the headline act.

In a brief time, the lights dimmed and Michael’s intro started. The throng pushed forward and the people at the bar scurried in to join them, all vying for the best spot.

Not a moment later, the Monroe camp came merrily onto the stage and straight into their first song. Ginger had changed his appearance, with white greasepaint and a black ‘Adam Ant’ stripe over his eyes, looking like Priss out of Bladerunner.

Sami was adorned in his usual smart garb, Michael in a black waistcoat and tight black trousers, contrasting with his long blonde flowing locks, Karl in his blue bandana and band t-shirt, whilst Mr Conte just looked Rock!

It was only now that the crowd seemed to have gained any life and started moving to the music, however it still seemed strained. Michael was doing his best to jeer and involve the crowd by making full use of the stage, monitors and anything else he could find to stand on to get their attention.

Halfway through their set, something cropped up with the sound, so a mini soundcheck was undertaken. In some cases this would have been an embarrassment to the artists on stage, but not these hardened professionals. They made light of it and performed a ‘folky’ song, with Ginger taking the lead.

It wasn’t a track I personally was familiar with, but a few of the crowd knew it and a little sing-a-long ensued. It made me chuckle and was one of the highlights of the night.

The sound man sorted out any problems and tweaked his knobs until he was satisfied and the show carried on as if nothing had happened.

I think the glitch had a very positive affect on the audience because after that, the room seemed more lively.

The time for the encore came and with only a small band shouting for more, with a few people leaving too, the troupe regained the stage.

Michael took this opportunity to perch himself atop one of the speakers stage left to introduce the band.

Finishing off on a high with the last track and very loud applause, the band left the stage and the room quickly emptied, leaving only a couple of hardcore fans waiting for the Hanoi Rocks man to re-appear in hope of signings.

Feeling tired from the day’s long drive, we headed off to the Travelodge for a much needed rest.

I Wanna Be Loved
Life Gets You Dirty

HEY HEY YEAH - RAVENEYE TURN THE LIGHTS OUT IN CAMDEN 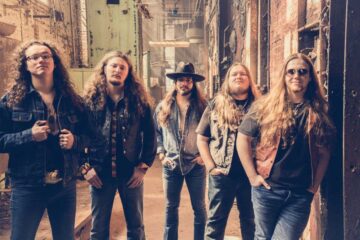