Jazzers, popsters, groovers, but to the bottom of their souls, rockers, Toto surprised and delighted a sodden yet sated near-capacity crowd with a mix of venerable hits, AOR album classics and favourites from the Porcaro family scrapbook.

This return to the UK is part of their ongoing ’40 Tours Around The Sun’ globe-encircling itinerary, which landed in London in April 2018 for what was a dazzling two-set indoor performance at the Royal Albert Hall that ended appropriately with the bittersweet ballad ‘The Road Goes On’. 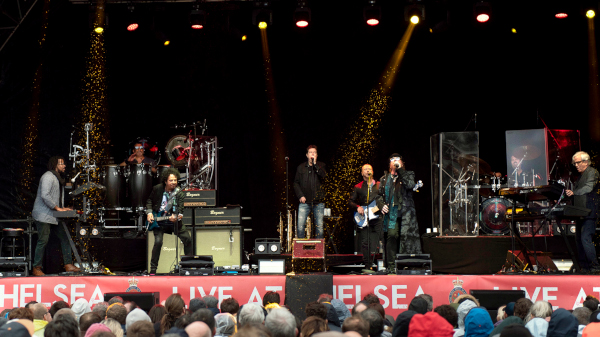 This time around, for the debut show of their extensive European tour, the band opted to brave the British Summer at an outdoor arena in the grounds of this historical building. Despite fears of a deluge of doom to dampen the evening, the rain Gods of Africa relented and oversaw a predominantly dry evening from their metaphorical, meteorological Olympus.

Bearing in mind that this is an old soldiers’ retirement home, the volume levels were stately rather than cacophonous but decent enough to permit the sound mix to convey the exquisite and exuberant performance of a band still at the peak of its powers, forty years on from their original post-high school union.

The show opened in style with a newly released song, ‘The Devil’s Tower’, that’s included on the ‘Old Is New’ bonus disc of the Sony’s recently released 13 CD box-set, ‘All In’. Originally conceived, but never completed, at the time (1981) when the band was working on what became their Grammy-gathering goliath of an album, ‘IV’, from which four songs were featured tonight.  It’s a triumphant opener, full of the all the band’s trademarks; complex yet groovy backbeat, intricate counterpointed instrumental lines, soaring vocals, rich harmonies and blazing guitar. 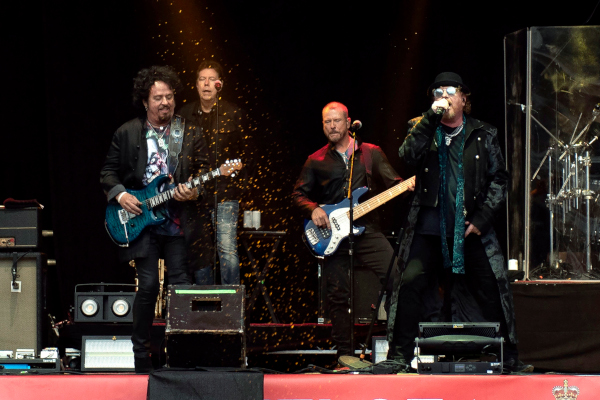 This first round knockout song was a mere sucker punch compared to the concussive maelstrom that followed with call-centre anthem ‘Hold The Line’. Love might not always be on time but this elite octet of world-class musicians remained gloriously syncopated throughout the nearly two-hour show.

As with most Toto tours, the live band is an exemplary combination of time-served original members from their 80s heydey, supplemented by heavy hitters, pluckers and strummers from the upper echelon of US-based session players. Steve Porcaro on keyboards embodies the legacy of his sadly departed brothers in music Jeff and Mike and alongside guitarists’ guitarist Steve Lukather, they are the good-old-boys of the band.

With the departure of beloved original singer Bobby Kimball in 2009, one of the band’s oldest allies, Joseph Williams, resumed the lead vocalist role he had occupied for three years in the late eighties. Indeed it’s Williams’ consistent, powerful and soulful high-tenor voice that has underpinned the high quality and burgeoning popularity of Toto’s recent tours. His voice on tonight’s savage version of ‘Lion’ had real bite and the crowd roared their approval. The lyrics in the new song, ‘Alone’ (from 2018s ’40 Trips Around The Sun’ compilation), relate to the subject of growing old, yet the music and particularly the lead vocals show no sign of ageing and are as vibrant as ever. 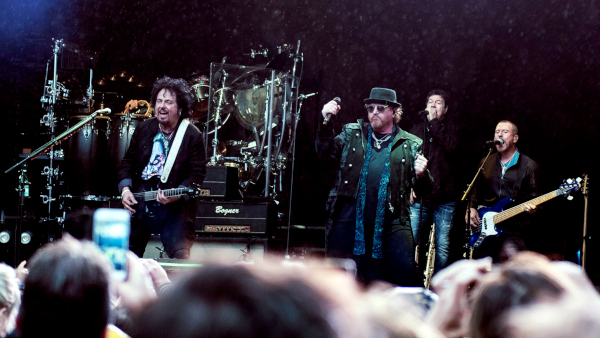 Long-time Toto studio compadre and master of percussion, Lenny Castro, has become a regular touring member of the band, in perfect synchronicity with arguably Nashville’s Most Valued Drummer (MVD) Shannon Forrest. Together, they generated a rambunctious and rhythmic symphony that culminated in the carnival atmosphere of the extended version of ‘Africa’ that closed the main set.

In Chelsea Toto had an impressive arsenal of vocal firepower who earned their spurs during the past two tours. Sax player Warren Ham and bassist Shem von Schroeck double-up on mic duty and add strength and depth on the full-on rockers like ‘Goodbye Girl’ and ‘English Eyes’ and silky smooth harmonies that met all the way on the eternal ‘Rosanna’ and the lesser-known but equally IV-some ‘Make Believe’.

Sadly, there was no room in the set for excellent new song ‘Chelsea’, the mid-paced groover that Joseph wrote about the time he lived in the London Borough, while his brilliant composer father John was working on classic soundtracks like ‘Meet The Parents – When Luke Met Darth’. However, the inclusion of the very prog instrumental ‘Desert Theme’ from the film ‘Dune’, to which the band contributed the soundtrack, was as classy and elegant as afternoon tea at the Saatchi Gallery. 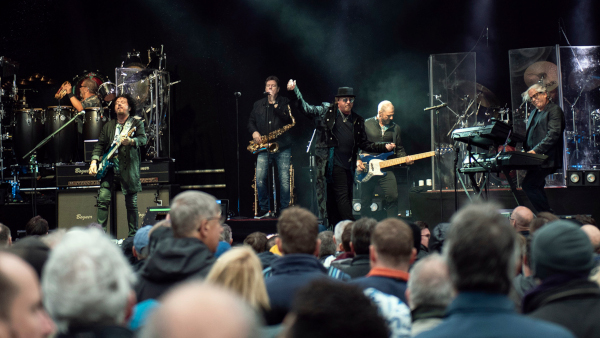 The most notable absence from this tour is the convalescing, co-founder, key writer, player and vocalist, David Paich, who by all accounts is doing well back home. As such, deputising for Sheriff Paich is New Power Generation alumnus Dominique ‘Xavier’ Taplin and he’s brought his A game. Paich’s piano style, combining melodic nous and jazz technicality, has always been a core part of the Toto sound. Tonight Prince’s man played like a King and, true to his nickname, brought the ‘X’ factor. From the barrelling piano on ‘Lovers In The Night’ to the chiming riff on ‘Hold The Line’, his playing was assured and inventive, particularly on the extended piano solo that prefaced the primal crescendo of the intro to ‘Goodbye Girl’.

The fast-paced and euphoric opening third culminated in ‘Rosanna’ with Luke’s magisterial outro solo and led into the acoustic medley that has become a regular feature of Toto shows that allows the band to revisit songs from their diverse and rich catalogue that can’t be accommodated in their main set. Staples like the gentle ‘Human Nature’ and smooch of ‘Georgy Porgy’ were adored by the crowd, yet it was the serene ballad ‘I’ll Be Over You’ that was most touching, revealing hard rocking guitarist Steve Lukather’s sensitive side with a breathtaking and sensuous lead vocal. 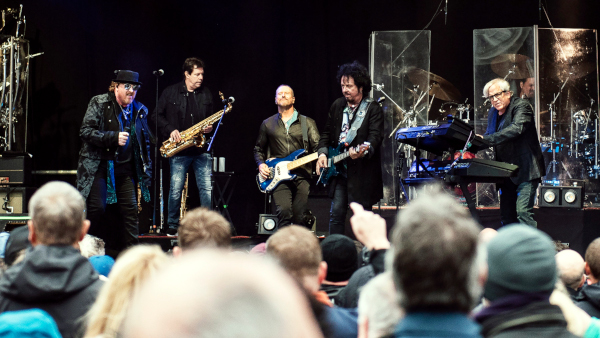 Since their debut album in 1979, both live and in the studio, the band have seen the passage and, sadly in the case of brothers Jeff and Mike Porcaro, the passing of many revered musicians. Throughout their career, the one constant member, present on every album and at every show, is Lukather. Revered for his adaptability and virtuosity as a session player (from Asia to Zevon), it’s on-stage where he truly shines. From the tetchy fusion work-out ‘Jake To The Bone’ to the emotional searing cover of ‘While My Guitar Gently Weeps’, the audience feels the force of Luke’s guitar playing and the bliss of live performance.

This was a perfect evening of the finest music, in the finest setting from one of the finest bands of musicians. How apt that the event promoter was Kilimanjaro, given this performance of Olympus-risen magnitude.

As the coda to that eternal ode to the Serengeti faded into the night, the band returned to the stage for ‘Home Of The Brave’, which struck a poignant final chord in the midst of this old soldiers’ home, barely a week after the 75th anniversary of D-Day. A victorious performance in challenging conditions. Lest we forget. 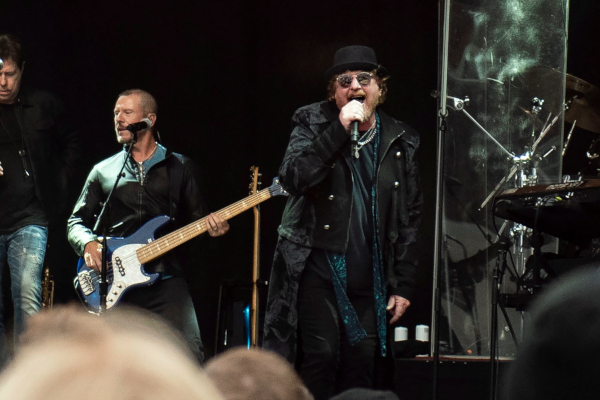 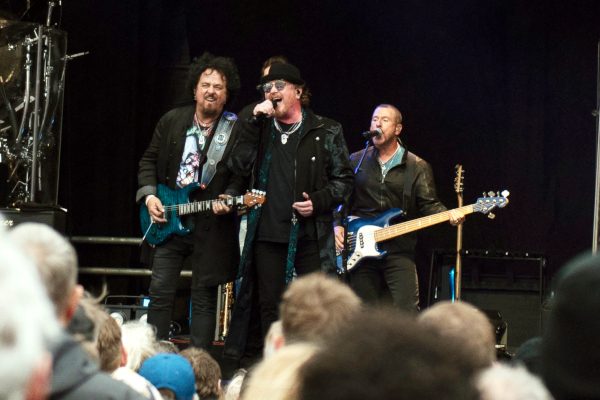 Setlist:
Devil’s Tower
Hold The Line
Lovers In The Night
Alone
I Will Remember
English Eyes
Jake To The Bone
Rosanna

Encore:
Home Of The Brave 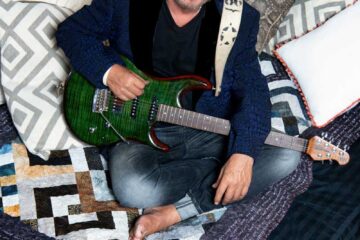