With the UK heading for the sharpest recession on record, caught in the middle of this pandemic are our Grass Roots Venues. Like many businesses, there are many of these in danger of going to the wall and MetalTalk have spoken with three such venues to find out why #saveourvenues is important to them.

While there are a number of Government measures in place to support businesses (see below), it is not possible to provide all the support required for all the businesses in need.

Especially at risk are the independent venues, pubs and clubs not part of a chain, who have no parent company to offer support. Building owners are often reluctant or unable to offer rent reductions, while many chain establishments are suffering too and offering limited support to their tenants.

You many have seen social media posts from venues asking for support using the hashtag #saveourvenues.

This is part of an organised campaign, coordinated by the Music Venue Trust (MVT).

Created in 2014, the Music Venue Trust has been supporting Grass Roots Venues by providing individual support to venues, funding via grants and lobbying Parliament.

Supported by patrons such as Sir Paul McCartney, the Trust have had a number of success in protecting the future of venues and have helped to shape some policies of the Department of Media, Culture and Sport.

You may have seen venues appealing for crowd funding and advertising streamed events. This is an important part of the Grassroots Music Venue Crisis Fund program, which is being coordinated by the Trust.

The aim is to help venues generate a lifeline to ensure their survival, with excess funds going into the main Crisis Fund pot. They are also helping the venues plan through this crisis, so that as many as possible are alive when times begin to return to normal.

“Grassroots Music Venues are the research and development arm of the music industry.

“In the last few years, Holding Absence, Venom Prison, and Those Damn Crows have all played early shows at Fuel and we’re passionate about giving new artists a platform to perform.

“In the U.K. there’s literally a handful of venues like Fuel that specialise in rock and metal and we’re hoping that people out there that love the same music as us will be able to help in whatever way they can.

“We know that times are desperately hard for everyone and we appreciate any help at all. As the campaign continues, together with the national organisation, we aim to host online events to raise awareness and are calling on artists and other people involved in the industry to get involved if they can.

“Let’s make sure that when it’s safe to do so, we can all go back and visit our favourite venues.”

Fuel Rock Club is an important venue on the Metal scene. Bruce Dickinson has pulled pints behind the bar and Bullet For My Valentine’s Jamie Mathias used to work behind the bar before he joined the band. Lzzy Hale also popped in recently, the night before they played the Motorpoint arena.

“The Cavern Free House, along with all other venues in the UK, is at present languishing in a surreal forced closure, the likes of no one has ever experienced before.

“If this goes on past June it’s hard to see a way out of this nightmare for myself and I’d imagine most other music venues.

“As a privately owned business, the Cavern operates in a leased premises and being in the London area, believe me the rent I have to pay would most certainly ‘Make your Guitar Gently Weep’ and without my wonderful loyal customers in there to spend the money that enables me to pay it, I am most certainly in deep trouble!

“This #saveourvenue venture that is setting out to try and help venues like mine might well be the lifeline that enables some of us to hopefully get through this.

“Stay strong people and hopefully we will all meet up on the other side of this better, stronger and more determined to bring the music to the masses that basically gives so many musicians and music lovers alike the reason to live their lives!

“Bannermans has been bringing live acts to Edinburgh for a number of years and has had a host of bands and legends through the doors. For a venue with a capacity of around 200, we have had the likes of Warrior Soul, Faster Pussycat, Love/Hate, Therapy?, Supersuckers, The Wildhearts, The Dogs D’amour, Space, Dodgy, Conan, Venomous Concept, Budgie, UK Subs and Discharge.

“We support a lot of up and coming bands and host showcase bills and also do album launches etc for loads of local acts, some that are really starting to make inroads. King Witch, Dog Tired, The Amorettes, Runemaster are a few that have gone on to be signed and play some major tours & festivals.

“We have held the occasional band competition with prizes including own headline gigs, a day in the studio and guaranteed to be featured on the Bannermans Under The Bridge compilation album which is coming back in 2020.

“Supporting live music venues at this time is massively important. While we are striving to book the bands you want to see after this all passes, there are elements which go on behind the scenes that are not always considered.

“Agents require deposits to secure shows. The likes of sound engineers are not working and there are various other aspects to be considered. We have a very loyal support at Bannermans and we take nothing for granted.

“We hope to be back ASAP and see faces new and old. Let’s keep the scene alive.”

HOW TO SUPPORT THE VENUES

All three venues are run by committed music lovers with a passion for Grass Roots music. All three have Crowdfunding links on their Facebook pages (links above) and any donation, however small, will contribute to them being able to open up after this crisis abates.

While many of us are in financial difficulties, if you are unable to contribute financially, you can help by sharing the plight of the Grass Roots Venues via Social Media with the #saveourvenues hashtag.

Venues like this will close if we are unable to help them, although some may in time be taken over, there is a danger that the theme of these places may change.

If you have visited the Gastropub known as The Bull & Gate, Kentish Town, looking around, you would not realise that prior to 2013 it had hosted bands such as Coldplay, Nirvana and Blur.

Hopefully, the Metal future will be brighter.

There is a wide-ranging package of government support for UK businesses and employees that you can find here:

The support includes information on the following:

In addition you may find the Business Finance Guide a useful reference point if you are worried about running out of money to cover operating costs and wages. It has guides on how to manage cashflow and working capital requirements during periods of uncertainty and is an independent, free source of information to help support UK businesses during the Covid-19 crisis.

TRIVIUM: 'WHAT THE DEAD MEN SAY' IS SUCH A JOY

The Sunday Supplement / China: Stoner Metal in the Middle Kingdom 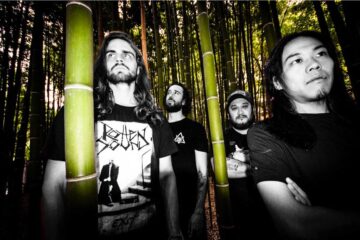