The original line up of The Damned will play four dates in July 2021, with tickets available from tomorrow (23 October) via AEG Presents.

Dave Vanian, Rat Scabies, Captain Sensible and Brian James are to reunite for one tour only, which begins at The Hammersmith Odeon, 9 July 2021.

The bands first single ‘New Rose’ was released in 1976. This single, on Stiff Records, was filmed in the basement of the Hope and Anchor pub in Islington, down the road from Pathway studios where the song was recorded.

The band then joined The Sex Pistols as the opening act on the famous and ill-fated ‘Anarchy Tour of the UK’.

Their debut album came out in 1977 and the band went on tour with T.Rex. That proved to be the final T.Rex tour, as Marc Bolan died later in the year.

Now, over forty years later, after many different line-ups, multiple albums and nine Top 40 Singles, the original band are back together for one tour only. 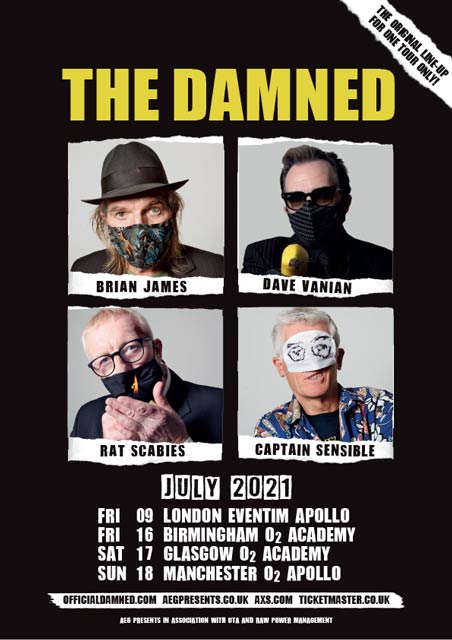