The Beauty of Gemina are a Swiss Alternative Rock band, whose ninth studio album ‘Skeleton Dreams’ will be released next year. The band, led by Michael Sele, have achieved good success in and around their homeland, with Sele recently being awarded the Gonzen Cultural Prize for his musical achievements.

With a broad style of music over their music career, often quite dark, moody and gothic, they have also ventured into acoustic touring. They are the poster boys for development and evolvement.

Using the time to recover, process what had happened and regain his strength, the period took a productive turn, with the music forming the backbone for ‘Skeleton Dreams’.

We spoke with Michael, to find out how his health is now, why he has not pushed into the United Kingom with the band before and to discuss the different style of music over his career.

MetalTalk: Thank you for taking you time to speak with MetalTalk, Michael. How is your health now? Are you all fit and rearing to go?

Michael Sele: “My pleasure and yes, I‘m fine and I’m ready for the next adventure.”

Fifteen years in the business, with The Beauty of Gemina, your ninth album is out soon… plus two live albums and a DVD. You’ve been successful in Europe, but you’ve not pushed yourself into England, or the UK, very much before… Is this because of our poor cuisine? 🙂

“Quite the contrary, Jamie Oliver he’s the man!

“But let me tell you this, my family and I, we are huge England Fans. We spent our holidays so many times in England that I did not find the time for touring till today.” 🙂

You have played England before, though… After the first album, ‘Diary of a Lost’, you played some dates in England… so you’ve been over here at least once…….?

“That’s right and we had a great time. It’s really too long now so we have to come back very soon.”

Going through your back catalogue, there are many, many different styles over the years. It’s pretty impossible to pigeon hole you in a music genre… you write as per your current moods?

“Over time, a lot of things changed. In the beginning computer, samples and all these technical toys were very important to me.

“There could not be enough tracks. Particularly, on the first 3 albums, you hear that clearly, but then the reduction of the electronic elements has begun and the organic sound patterns were becoming much more important.

“In the last 3-4 years I have been composing all songs only on the guitar or piano and voice.

“I record them on my smartphone and only then I‘ll go to the studio, if the music and lyrics are finished. I really try to record only these things or to add the missing elements of the song. And yeah, the principle is now ‘less is more’.”

Tracks like ‘Psycho Flood’ and ‘Gemina’ from the first album are quite dark, moody and gothic…. Do you look fondly back on your first album now?

“I have a contradictory relationship with the first recordings, although there are really a lot of great songs on this album.

“We play live most songs from the first albums, but not often and not because the songs are bad, or I would not stand by these songs.

“Believe me, our Gemina fans, since the very beginning, would love to hear these songs, but it’s an issue with the aforementioned arrangements.”

You have also performed songs like ‘Dark Rain’, with its country influences…. We loved the ‘Dark Acoustic Night’ version of ‘Dark Rain’. What made you think about doing an almost all seater acoustic tour?

“It was in 2012. I had an invitation to play a few acoustic concerts with a friendly band.

“It was the right challenge at the right time, so I decided to reinterpret my own music in an acoustic way and the album ‘The Myrrh Sessions’ was born. It was probably the most important step in my career.

The apocalyptic mood of ‘Suicide Day’…..a thought provoking, moody track, but with a message of life…. Musically it is a long way away from harder Alt Rock of your earlier albums. Is this a sign of your musical development over the years?

“Absolutely correct, I am very glad of having the freedom to change myself constantly, to understand my song writing as a flooding process.

“With the present album I feel I am reaching a goal, ‘coming home’ in my creative working.”

With the award of the Gonzen Cultural Prize (Congratulations!!), your work on Schatten überdem Nichts, as well as your TBoG music, you must have a lot of respect in Switzerland and neighbouring countries…. Do you think that the music scene is more difficult these days, with streaming and a dilution of quality?

For example, do you wish for simpler times, less technology, the tradition of listening to albums as a whole, rather than the almost disposable ways which streaming sites present todays music?

“In any case, it is becoming more difficult. With all these streaming sites there exists a whole range of music and songs, so you do not get a chance to keep an overview or discover something new.

“Additionally, today you have direct access to nearly the whole catalogue of the major bands and artists.

“Some years ago, in your CD shelf there were two, maybe three, of your favourite albums.

“If in these days, you want to hear all songs or artists, you could never finish. Also, the listening habits of the younger people has been changing.”

With the new album out soon, can you talk about your writing process for this? With the heart surgery and then COVID-19, it must have been a challenge?

“Fortunately, I had already collected a considerable part of song sketches and fragments on my smart phone before this unexpected and dramatic break.

“The operation, the recovery including the rehabilitation, took approximately four months.

“This was a difficult and stressful time, but also a time full of new experiences and afterwards I felt full of energy and creativity. There was a lot of working, through.

“Afterwards, I had begun very intensely and with an enthusiasm, to record new song sketches and at the end of 2019, I chose from all the sketches the definitive songs for the new album.

“At the weekend, when the first lockdown came, I wanted to start recording at the studio.

“Naturally all my plans were thrown overboard at this moment.

“These extraordinary times have had a great influence on my work and for me it was important to let that flow into my music.”

Can you introduce us the other members of your band? I believe the drummer and bass player are long standing collaborators? Is that the nucleus of the group, which you then add to as each albums material requires?

“Mac Vinzens on drums is part of TBOG since the beginning. Andi Zuber, on bass, has been one of our Live Bassists for a few years.

“In most of the concerts, he was part of the live line-up. We had many changes in the past and there were different TBOG Live setups over the years from a reduced Trio, to an ensemble with seven musicians!

From the new album, the track ‘A Night Like This’, is a great track. …. Wonderful video… three eyed cats and all. What do you see when you look in the mirror?

Is this track an indication of the overall style of the album? What can listeners expect?

“Yes and no, at any case sound-wise. The single ‘A Night Like This’ belongs to the faster songs of the album, with the spheric guitars.

“On the album, you find also some Blues leanings, as well as very reduced songs. One only with piano and voice and another only with guitar and voice.

“All in all, dark melancholic and very atmospheric, but always with a pinch of confidence and joy of life!

“Don’t fear your dreams and close your eyes!”

And, covid permitting, might we see you stage in the UK next year?

“Through all these shifts of concerts this year, there will be a lot of postponed concerts next year. I assume that it will not be easy to find a place for a concert with a new theme.

“But, you know hope dies last and we will try everything to play in the UK.”

Do you have any message for our readers?

“Let yourself be kidnapped and guided to the Geminaland; you will not regret it!”

The Kinks / Ray Davies talks 'Lola Versus Powerman' at 50 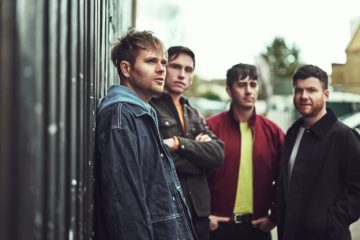