There are certain producer-artist relationships that are just meant to be. The chemistry from the recording console to the studio can work in ways like the perfect marriage, only with less lip biting. And there have been some absolutely near unbreakable studio bonds over the years.

You have the likes of George Martin/The Beatles, Roy Thomas Baker/Queen, Martin Birch/Iron Maiden, Mutt Lange/Def Leppard and Bob Ezrin/Alice Cooper  and one that seems to just grow in stature with every release is the Kevin Shirley/Joe Bonamassa union.

Even the album’s posh tea leaf tin inspired artwork (The little Tetley Tea men in white shop coats would not of had the same effect) sets you up for something magically regal.

Opener ‘When One Door Opens’ sets the tone perfectly with it’s imperial intro, then bleeds into a very Bond-ish theme, before it’s explosive finale.

Bonamassa doesn’t over force his Anglofile leanings on you at any point on the album. You know you are listening to today’s quintessential American Blues man, but you can sense where he wanted to take the album.

Title track ‘Royal Tea’ could’ve been inspired by almost any genre of the Blues, with a deep Mississippi flavour supporting some more modern tones.

If Bonamassa decided just to write Blues power ballads for the rest of his career, you might not hear as many grumbles as you might think. 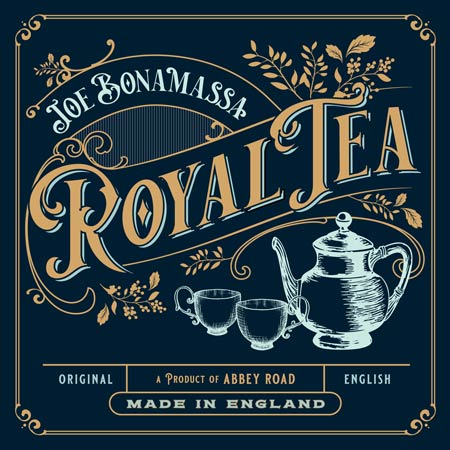 ‘Why Does It Take So Long To Say Goodbye’ is pure gold and no surprise it was co-written by Marsden, hence the Britishness and it proves there’s no-one around today who can balance the commercial with the traditional and deliver such an emphatic result.

‘Lookout Man’ is brash and bold with big scoops of musty harmonica and the almost Iommi-like riff overtly waves the Hard Rock flag.

The overriding theme of the album maybe British Blues but ‘Savannah’ is very top heavy, with very sugary Country ingredients. It’s back on terra firma with the 100% proof ‘High Class Girl’ oozing the Blues out of every pore and the no frills solo thrills in it’s jam feel simplicity.

The early chimes of ‘A Conversation With Alice’ evoke earlty 70’s Status Quo, with it’s chunky riff, but that is where any hope of a non stop session of ‘heads down no nonsense boogie’ ends. A more debonair tune ensues with slick radio hooks that will delight middle of the road enthusiasts.

The Cream inspiration comes racing out of the traps on the galloping ‘I Didn’t Think She Would Do It’ on which a fervent Jack Bruce immediatly comes to the forefront of your thinking. ‘Beyond The Silence’ is another arresting ballad, smothered in dusky piano and acoustic tones garnished with a beautifully haunting chorus.

With too many artists opting for the more sombre finale, ‘Lonely Boy’ takes a completely opposite route with an endorphin raising horn section fuelling an all out Honky Tonk assault.

With ten tunes on offer, you do get the feeling that they had another couple in them, such is the run of quality, but with Bonamassa pumping out albums with such regularity, you can’t and shouldn’t complain.

Recorded in the same room as some of the finest Star Wars scores, the Shirley/Bonamassa team seem to have a trusted relationship, just like Han Solo and Chewbacca.

And with ‘Royal Tea’ they’ve made The British Blues Empire Strikes Back.