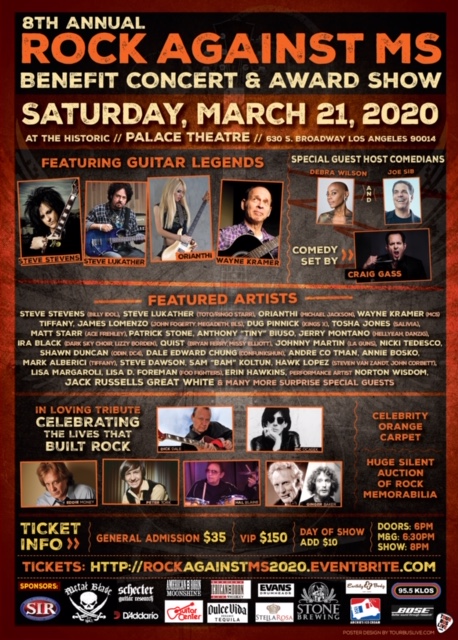 Steve Lukather, Wayne Kramer, Steve Stevens, Dug Pinnick, James Lomenzo, Orianthi, Robby Krieger and many more will take to the stage for the 8th Annual Rock Against MS Benefit Concert & Award Show which will be held at The Palace Theatre, 630 S. Broadway @ 6th Ave in Los Angeles on 21st March.

Returning for hosting duties is the Queen of sketch comedy, impressionist, actress and renaissance rarity Debra Wilson. Debra will be sharing the hosting duties with the rocker of all comedy Joe Sib who is hot off the Metallica tour. Together they will unfold an evening of comedy, music and art in benefit of the Rock Against MS Foundation.

Kicking off the night is the hottest Celebrity Orange Carpet featuring the biggest and brightest actors, TV stars, rockstars and comedians including a star-studded tribute to some of the artists we lost in 2019 in a high-energy celebration of their most beloved songs.

This special night is to raise awareness and educate the public about multiple sclerosis, while raising money to build the first of many MS resource centers, aptly name The Rock House.

Famed performance artist Norton Wisdom will be performing his art live on stage during the music.

Showtime is 6.00pm and tickets can be purchased here.

Meanwhile in England, the fourth annual Burr Fest takes place at London’s Dome in Tufnell Park this Saturday, March 7th. Burr Fest is held in memory of former Iron Maiden drummer Clive Burr who sadly passed away in 2013 due to complications from MS and the charity fundraising event is in aid of MS Action Fund.

Previous articleFROM THE ABYSS: ZIFIR STAY TRUE TO THEIR ‘DEMONIAC ETHICS’ WITH THEIR MESMERISING NEW ALBUM
Next articlePRETTY MAIDS TO RELEASE LIVE PERFORMANCE OF THEIR CLASSIC ALBUM ‘FUTURE WORLD’