Camden’s historic Dublin Castle is one of a large number of venues across the whole country who are struggling to keep afloat, as the continued lockdown threatens to decimate the live music scene.

The costs associated with running a venue in London are the largest in the country and the small business grant scheme is only open to those with a rateable value below £51,000, which excludes a large proportion of the Londons venues.

There has been no suspension of the night-time levy, a charge to pay for policing and the clear up after the weekend rush of revellers.

While business rate holidays have been introduced by Camden Council, there are still large costs to pay, even through the venues have been closed since the end of March.

Situated in a Victorian building built in 1840, The Dublin Castle has always been fighting a battle to maintain the premises since they took over in 1974.

Now their remaining funds are spent and time is critical.

Tony Gleed, from The Dublin Castle, told MetalTalk: “The Dublin Castle is an important staging post for any bands worth their salt coming up through the Alt Rock, Indie and Punk Circuits during Bug Bear’s tenure as in-house promoters for the venue since 1996.

“Great sound is something we set great store in and this in combination with the unique atmosphere of this family run pub, has been key in maintaining a unique experience for bands and punters alike.

“Most bands that have gone on to make it have played their dues at the Dublin and often come back for more for exclusive fan club based shows (Blur,Madness).

“With reference to MetalTalk, bands such as Reef, Arnocorps, Guitar Wolf, Queen Adreena and Part Chimp have all laid down loud slabs of righteous noise in the venue.

“Muse were signed in The Dublin too and plenty of lesser known, but equally hard hitting Heavy Metal acts have put their feet on our monitors. I hope we can invite more Metal Muthas to the party in 2021, once the Covid-19 dust has settled!”

To help save this historic venue, The Dublin Castle have started a crowd fund campaign, as part of the #SaveOurVenues campaign organised by The Music Venue Trust GMV Crisis Fund.

More details can be found below and we know they would appreciate any support, however small. #SaveOurVenues

Phil X is 'Right On The Money' with new single 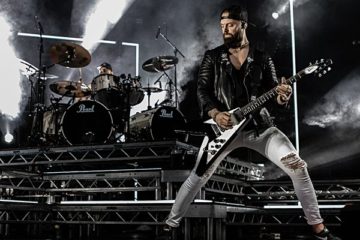