‘Chapter I: War, Horrid War’ examined the malign episodes of this past century, shining a light on difficult subject matter using a begrimed philosophical lens.

‘Chapter II: Render Unto Eden’ continues in a similar philosophical vein, but there is an even darker, more sombre, sinister and hypnotic feel to this second chapter. Again five tracks, but with a slightly longer running time, it is equally as complex and, like its occasionally misunderstood predecessor, requires multiple listens to fully absorb the complexities.

There seems to be a touch of cynicism to the title ‘Render Unto Eden’ and not surprisingly so when you examine the content further. Ultimately it is a case of interpretation.

Beginning with the hauntingly reflective to open ‘Promethean Fire’, with its building drum rhythms breaking into a dark crushing atmosphere. With the arrival of the multi layered vocals, which are prevalent throughout this album, and driving riffs, it is a track which ebbs and flows so organically, pulling you in, briefly loosening its grip on you before drawing you back again.

The track features guest vocals and lyrics written and performed by Maria ‘Masha’ Arkhipova of Russian Pagan/Folk Metallers Arkona in the second half of the track, adding a hauntingly brooding and contemplative quality.

Continuing with ‘The Faustian Pact’, a dark powerful track with an exotic eastern tinged edge to the repeat melody and one of the things by track two that strikes you about this very well created and delivered release, is the unrelenting yet well delivered drum work which adds a great deal of depth and texture to the already full sound.

This could well be my favourite track, but the standard is so high and consistent it is a difficult choice. But those exotic chunks of guitar work might be just enough to sway me, especially given the way the drums mirror it beautifully.

‘Areopagitica’, inspired by poet John Milton’s letter to Parliament about censorship, has even more relevance in our current times.

With its heady Doom like crush to the blackened delivery, ‘The Snare of the Fowler’ opens on a spoken soundbite and with a title which could be a biblical reference that could be interpreted as referring to Satan and the snaring of unguarded souls.

More importantly it is an intensely engaging track, which makes a compelling listen, again with that engaging ebb and flow.

Final track, the hugely powerful ‘Pascal’s Wager’, is based around and inspired by the argument in philosophy presented by the seventeenth-century French philosopher, theologian, mathematician and physicist, Blaise Pascal.

He put forward the idea that humans bet with their lives that God either exists or does not and the music reflects equally that mood of both hope and despair in its overall delivery.

It is so good, even in comparison to it’s excellent predecessor, that I am already looking forward in hungry anticipation to Chapters III and IV.

A heady release that will leave you with much to think about.

Guns 'n' Roses Have Plug Pulled On Them At Leeds 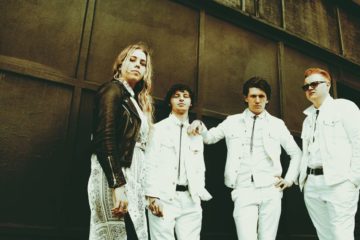