There is a rumble of thunder from the south and a mighty storm that has been brewing for a while is threatening to engulf the nation. The name of this phenomenon strikes fear into the hearts of all those not prepared to have a good time and any adverse to the power of the banjo: The Outlaw Orchestra.

Coming from the Wild West (End) of Southampton, these four desperados have been plying their trade from the notorious Moonshine Alley of the River Hamble and making raids all around the UK, forcing people to enjoy themselves with their own brand of rock infused country, all served up with a huge serving of tongue in cheek lyrics.

Do not be mistaken though, these boys can certainly play and this, their full-length debut, is packed with well crafted tunes that encompass all their various influences.

Opening with the manic Bluegrass of ‘Take A Bow’ you are put firmly in the passenger seat of a death-defying drive as the band go pedal to the Metal that mixes the guitar and aforementioned banjo to fiery result.

Lead singer David Roux has a bourbon edged roughness in his tone that perfectly suits the material, giving some added authenticity to the sound whilst coming out with phrases that really shouldn’t be in Country music. For instance, have you ever heard “fish and chips” mentioned in a song by either Johnny Cash or Waylon Jennings?

Well, it certainly is in the classic 70’s rock of ‘Chicken Fried Snake’, a track that not only mentions these culinary delights but manages to do so whilst sounding like a drunken party attended by AC/DC, Bad Company and Lynyrd Skynyrd. Really, it’s that unusual and that good. 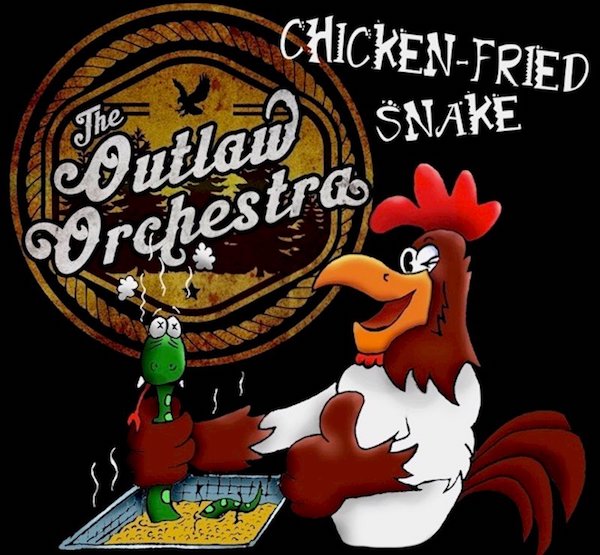 There’s more of a straight ahead Bluegrass feel to ‘Hanging Tree’, Pete Briley picking so fast you’re sure his fingers must be either be bleeding or made of Titanium as Ryan Smith’s drums and Alex Barter’s double bass surge along at breakneck speed.

In a bit of an unexpected leftfield move, ‘Whisky Drinking Liar’ is pure, honest Canvey Island R&B, melding the Feelgoods with a touch of Allman Brothers and ‘Arabia’ brings Americana, hard rock and an odd flash of New Wave spikiness into the delicious gumbo of musical ideas.

Never letting the dust to settle under their cowboy boots, ‘Jumpin’ Jive’ is a rockabilly treat that’s impossibly toe-tapping, the goodtime boogie washing over you like a flood and some nifty twin guitar work partway through bringing to mind early period Quo.

It’s back to Country Rock with the multitude of delights of the classy ‘It Happened Again’, rife with the sort of playing and tongue in cheek attitude of Joe Walsh’s ‘Life’s Been Good’ whilst ‘Voodoo Queen’ has a dark, carny feel that drips with Gothic atmosphere before it launches itself into a wild Flamenco party.

‘Too Much Willie Nelson’ is a good time rocker, the tequila and cold beer party themed music mixing with this tale of more ‘herbal’ influenced shenanigans. 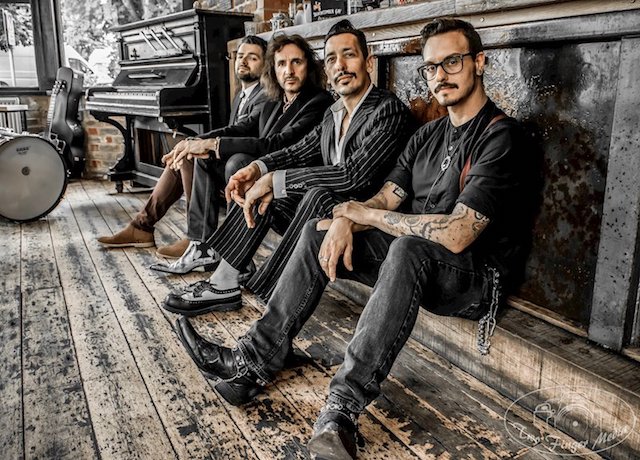 The band wisely save the best to last and ‘Send Some Whisky Home’ is a sophisticated and laid-back treat, replete with some fantastic and flavoursome soul drenched female backing vocals. Tastefully played and with a real focus on their deep songwriting skills, this is an indicator to the ever maturing ability that lies beneath their initially humorous image and a potential area that they’ll find themselves moving onto as the band develops further into their career.

At times the album seems a little too eclectic in songwriting styles but there is certainly a passion and great flair in all that they do and this will doubtless prove the springboard for more success.

The Outlaw Orchestra continue to be ones to watch and if you want to listen to something that will make you smile and dance like someone with one too many beverages inside of them then ‘Pantomime Villains’ is definitely something you need.

Lock up your liquor, your daughters and your cattle because the boys are most definitely back in town.

The Quireboys announce 'A Bit Of What You Fancy' tour