Mick Wall / This tour with Francis Rossi has something extra special

The Francis Rossi I Talk Too Much tour is back underway, and MetalTalk spoke with the event host and co-author of Rossi’s autobiography Mick Wall to find out how the legendary writer was feeling now events are back underway.

MetalTalk editor Steve Ritchie spoke with Mick, who was in Exmouth, outside the Pavilion, readying himself to help with the load in for the evening, “something I always like to help with.”

The obvious first question was if Francis lives up to his claim and talks too much? “We should have called the book ‘never fucking shuts up’,” says Mick, laughing. “He talks too much, but the stories are hilarious. Anyone who has caught a glimpse of him on TV might get a little flavour of it, but trust me, when you have been with him at a two-hour show, you suddenly go ‘Oh Wow’.”

Francis Rossi playing some songs, showing some videos, and telling his life story is the plan for the night. “It is hilarious,” Mick says. “We did a show last night in Camberley, and that must be the 60th show we have done over the last two years, and it was the best I’ve ever seen him.”

“The crowd was fantastic,” he says, “roaring with laughter, and in the second half, of the second half, after the intermission, he tells the story of Rick Parfitt. Right up to how he died, and that is some story. We’ve had two people faint when Francis tells that story at two different shows because it is grim. But at the same time, it is very celebratory of Francis and Rick, as they were very much a double act.”

The evening is a celebration of all that Rossi has achieved in a long career. “There are tears,” Mick says, “but it is a terrific show.”

Mick and Francis managed 36 dates in 2019 when the hardback book came out, and in March 2020, they were four shows into the tour, “before we started hearing words we had not heard before; self-isolate, lockdown, coronavirus.”

At that time, Fish was ready to tour and only managed a couple of dates.

Runcorn next week has been cancelled due to a COVID-19 spike.

But, it is a difficult time. Events are just starting up again, and some people who have bought tickets are still not going to come, due to the obvious worries.

“It has been fascinating,” Mick says. “We’ve been all over the north of England the last two and a half weeks, and we did one socially distanced gig in Middlesborough because of a COVID-19 spike. We had 99 people there. Before the pandemic, we would not have done a show for 99 people.”

But things are picking up. “I’m in Exmouth today. You can probably hear the sea. We have about 360 people for tonight. Looking forward, one venue is 480, another one is 460, so it’s fascinating. It is picking up again.”

Mick says it is an exciting time to tour such a great show full of anecdotes, memories, and emotions. “After 18 months of going nowhere, to be in a different town every day and see how the different people are coping is quite lovely. We start the show every night by acknowledging what is going on and thanking everybody who has turned up. There is a certain feel-good factor about it, and the people are lovely.”

Maybe, in some way, in these times, this Francis Rossi tour is unique.

“There are some wonderful people in this country,” Mick says, “and it is great to see them enjoying themselves. We are very grateful, and they seem happy that we are making this effort.”

There were many sold-out dates during the 2019 tour, but Mick does not expect many this time. “But this feels better, in a strange way,” he says. “It’s more, what’s the word? There is something extra….” ‘Special’, we offer?

“Exactly. I hope we have rounded some corner. It feels like most of us have survived this war, and we are now bringing a bit of joy in the immediate aftermath. I think it’s a one-off, and we will hopefully never have this experience again, and that makes it special.”

Mick Wall and Francis Rossi will be at the Town Hall, Launceston, tonight.

Tickets are available from https://www.francisrossi.com/tour-dates

Mick Wall / This tour with Francis Rossi has something extra special 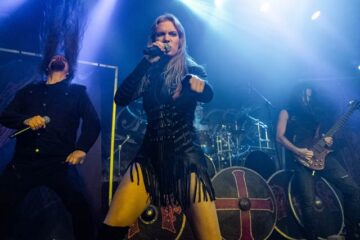