Mercutio / Fired up for May Antagonist-live Camden Assembly show

2021 was a breakthrough year for Mercutio. They released their stunning album Antagonist and went on tour with Inglorious. Now in 2022, the band have released a cover of the Dua Lipa song, New Rules, and will bring Antagonist live to London’s Camden Assembly on 20 May 2022.

The last time MetalTalk spoke with Ross William Wild was in the car park outside The Waterfront In Norwich after a fire alarm went off and the venue was briefly evacuated. Now the tour with Inglorious is finished, how do Mercutio look back on its success?

“It was a success just to get out the house, really,” says Ross. “It was great to connect with so many people who had been, just like us, locked away. Everybody was massively into rock music which is becoming more and more of an insular and sort of cult style of music, unfortunately. Not that it will be like that for long. But it was amazing. After finishing the album Antagonist, it was great to come out and pick and choose the songs from the album that we wanted to do each particular night.”

One of the things that really stood out for me was how well the crowds took to Mercutio as a band. “It wasn’t easy,” Fabio says. “I think at the beginning because we were touring with Inglorious, and they are a pretty different band. So we were afraid that the audience wouldn’t go for us, but it went really well. I have to say Ross is very good at getting people on board in just a few minutes. So that helped a lot.”

Ross describes Antagonist as the album he always wanted to create. “I’ve been on stage on various projects for 12, 15 years of my life.This is something I can hold in my hand and show people. It was a dream come true, writing it, doing the music videos, doing the artwork.”

With a vinyl version to follow soon, Antagonist is an album which has stayed with me and is often on my playlist on trips down to London to photograph bands for MetalTalk. It really gets you in the gig mood and, for me, has replaced Black Sabbath’s Never Say Die. The five side A songs are just phenomenal.

The Dua Lipa song, New Rules, was conceived during lockdown when Mercutio were connecting with each other, with a mind to do something fun. “We said, okay, let’s try with a song that nobody would expect from us,” Fabio says. “I came up with a riff, and Ross began to put a different interpretation on the lyrics.”

The Mercutio version is the same song but from another perspective. “She’s obviously writing about her experiences or her friend’s experiences with a bad boy,” Ross says. “I thought fuck it, let’s give this bad boy a voice and let’s keep them bad. It was a loving interpretation of her song, but sung from the bad boy’s perspective.”

The new album is underway, with a new single out next week, and the Mercutio democratic setup is still in place. “I’m a concept guy,” Ross says. “I like to know what the concept is. It can be as abstract as anything, but then we have to refine it into a sort of a message. From there, the lyrics and the music come, once we’re in agreement of the concept itself.”

Ross describes the latest song they have written as a call to arms. The recent Will Smith/Chris Rock Oscars incident further highlights the issues of celebrity. “People realize that these celebrities aren’t all they are cracked up to be, and we have a single that we’re going to be releasing pretty soon, which is very much Antagonistic in nature but quite revolutionary in the sense that it’s calling people to wake up stop just drinking down everything that they’re given by these celebrities and hail satan.”

Fabio says the writing process is different this time around. “We have a few things leftover from the last album, and we have got many ideas to work with already. So yes, we are writing new stuff, but we’re also looking back at things that we already have, we have already written together. They need a new shape and being reworked in the state we are in now, which is obviously different from what we felt a year and a half ago when we did Antagonist.”

The Camden Assembly show will find Mercutio playing Antagonist in full, including the song Terraferma, which has not seen a stage yet. The new single will feature along with some surprises.

Isabella Coulstock, currently on tour with Jools Holland, will open the show and also join Mercutio for the track The Ghost That Is You. “She’s in Southampton the day before the gig, so she will be hot-footing it straight back up to Camden,” Ross says.

As for the fans, “thanks so much for speaking to us, let alone supporting us and buying our stuff,” Ross says. “We love when people chat with us on the socials, we always chat back, and we like to have a laugh. “We like mischievous people. We like riotous people. We like chill people. We like all the free thinkers that join us on this crazy rock and roll journey.”

“I didn’t expect that so many people would start following us,” Fabio says. “We have managed to create a very good connection with many people, and I am so grateful and very happy.”

With a number of festivals, including Wildfire, to be announced shortly, it looks like 2022 for Mercutio may just beat 2021. See you in Camden. 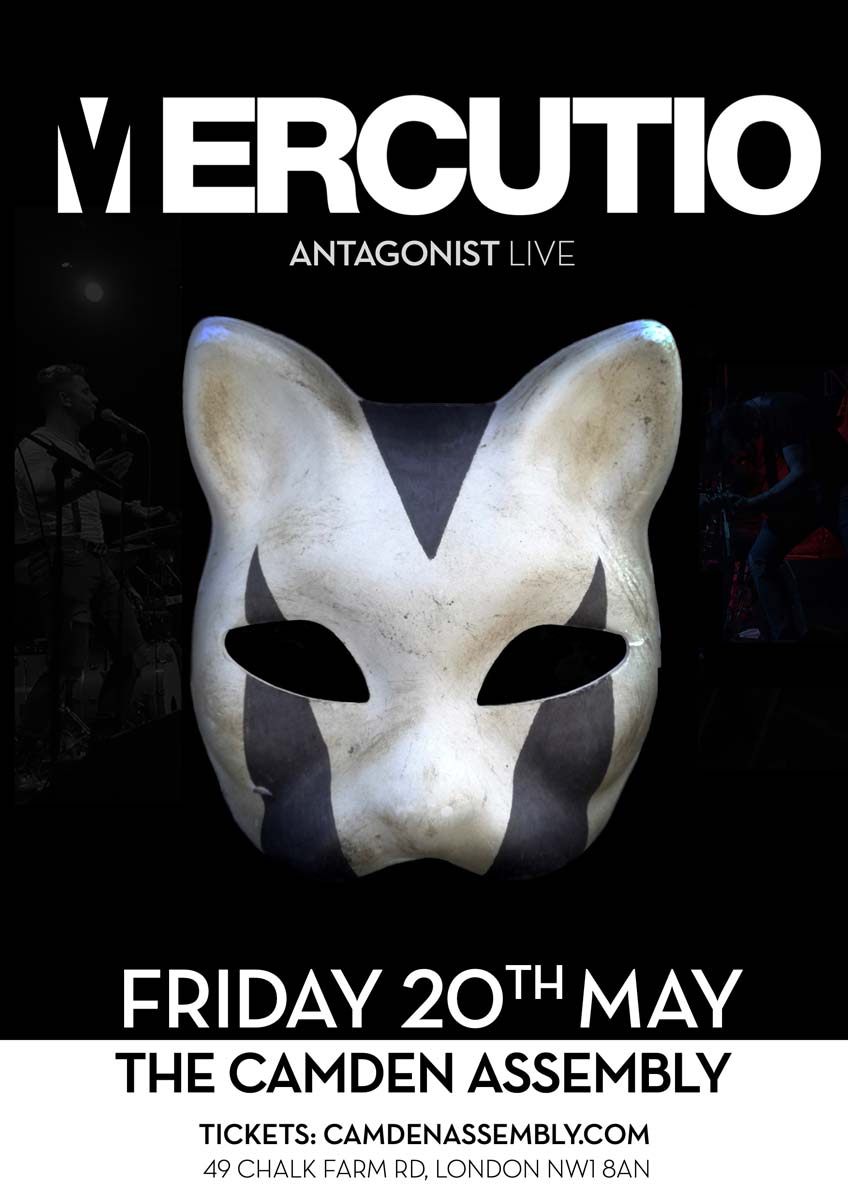 Mercutio bring their album Antagonist to a live show at The Camden Assembly, London, on 20 May 2022. “We can’t wait to be on the road again playing our new songs

Mercutio bring their album Antagonist to a live show at The Camden Assembly, London, on 20 May 2022.

“We can’t wait to be on the road again playing our new songs as we got so damn excited during the writing process,” the band said. “The Dua Lipa cover came out during lock down. It was a fun game we wanted to play to escape from that claustrophobic life. You get that particular feeling from the music video too. See you all out there Mercutians!”